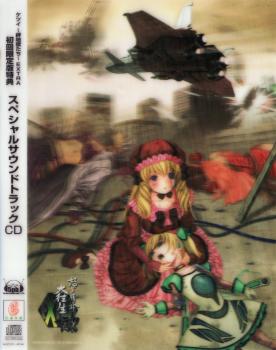 2010 has seen a huge influx of reprints and arrange soundtracks from Cave in either multi-composer stand-alone arrange albums or remixes for use in certain ports of Cave's massive library of bullet hell shooters. All of these efforts have been extremely well accepted in the game music community, so I expected great things when I heard Ketsui and DoDonPachi Dai-Ou-Jou were getting similar treatment for their enhanced Xbox 360 ports. What we received was pretty much exactly what I had expected. Improved sound with wailing guitar solos and a generally amazing reimaging of the perspective soundtracks. How much of the sound has changed? What steps did the arrangers take to ensure these classic soundtracks could be absorbed by the fans with a sense that these are new soundtracks? A limited edition double disc album included with Ketsui ~Cutting the Bonds of Hell~ Extra features both soundtracks and allows us to find out...

Disc One features the remix of Ketsui's grungy industrial rock soundtrack, and what a trip it is. We'll start off with the only new piece on the disk, "EXTRA (Main Menu)". The piece starts off with an industrial synth passage that leads into a rather ethereal main melody accentuated by the scratching effects and warping of the synth sounds. It depicts what is to come perfectly, and fleshes out well for its purpose in game. The select theme "Doomsday" is totally different, as it introduces us to the heavy grunge rock sound that is greatly improved over the originals. The stage clear theme and the name entry theme are the only two "extra" pieces on the album that divert from this principle. They focus a lot more on the synth and have almost no focus on guitar at all. Both are greatly improved from the originals again, which really shows in the wonderful slap bass sections of the name entry theme.

The highlight of this disk is in the stage themes, of course. The first stage theme "Interception" begins pretty much the same as the original, but quickly shows its updated sound in the hip-hop-influenced percussion that accents the intro much better than it's original, following quickly with the fast paced meat of the track. The fourth stage's "Defensive Line" is easily my favorite stage theme in Ketsui, and this version rocks so hard! The live overdriven guitar that begins within the first four seconds of the piece is a wonderful addition, and it follows up on several different occasions after the A section is over. The B section starts with an almost western feel, with a twangy sound in the guitar, which is followed by an amazing guitar solo spanning almost the entire rest of the track. We then are treated to an orchestral buildup with a sweet bass line and raving percussion leading into the repeat.

If the grungy sound is something you enjoy, then the boss themes will really be a trip! The standard boss theme "Darkened" focuses entirely on the overdriven guitar, with various synth guitar solos thrown in throughout only adding to the tension the original already demonstrated. The repeat section treats us to a guitar solo which could only be assumed to be there, and to be kickass! The last boss theme "Scaffold" follows the same pattern as the original, only focusing more on the stomping percussion than the guitar itself for most of the piece. It has a lot more tension building up than the original as well, which leads into the next track much more clearly.

"No Remorse (TrueLastBoss)" is just as insane as the original, only adding live guitar into the main features, making it much faster paced. For the majority of the A section, it is pretty much just a speed metal piece, but the B section totally makes this my favorite boss theme on the disk. The speed metal stops, and the track slows down, and gradually builds back up to the speed metal, adding in one of the catchiest "scratching" melodies I have ever heard. The speed metal then returns after a man's voice growling, and it continues to get faster and adding more layers of intensity building up to the repeat. Overall, it manages to surpass the original ten-fold and is easily my favorite track on the Ketsui arrange section.

The DoDonPachi Dai-Ou-Jou section of this album is slightly more traditional, but still keeps the same feel as the first disk with the amazing guitar solos and greatly improved synth work. "EXTRA (Main Menu)" is much more lighthearted here, focusing on a bouncy synth and toll bells to carry the melody. The select and stage clear theme have changed very little from their originals, only adding subtle synth layers and improved quality throughout. The name entry theme is much jazzier this time around, focusing on a fusion of hip hop synths and acid jazz keyboard samples. So far, one would think this side of the EXTRA album would be totally different from the last, but that thought should change with what I'm leading into next...

The boss themes feature major changes from their originals. Still just as crazy as ever, the addition of insane guitar solos and a much more defining percussive line take these three tracks to a whole new level. "Burning Body" has a much larger focus on the beat this time, fusing it with distorted vocals and synth. After this, the addition of a crazy guitar solo leading into the repeat does a fantastic job of conveying the insanity of the DoDonPachi boss battles. "Yellow Stream" still has the full militaristic march theme, but it is highly intensified with the new synth and industrial brass samples missing from the original. It comes across as more epic and endangering, fitting the boss battle perfectly.

The stage themes are again the largest improvement over the original soundtrack. I could go on forever about these, so I'll limit myself to my two favorites. The industrial jazz sound found in the original "Mixed Melody" is completely gone here, focusing more on a "classic rock" sound. About halfway through, we are treated to a synth solo, which leads us into the first sightings of the guitar solos. Afterwards the tempo doubles and carries the original melody to the best part of the track. The last two minutes or so are consumed by a kickass guitar-shredding solo worthy of a heart-racing headbang!

"Grieving Womb" is probably the only track with a crossover sound to the Ketsui side of this release. A grungy bass guitar takes up the A section, which doesn't last too long. The same kickassery that was the shredding solos comes back to carry this track into a tradeoff of guitar awesomeness and synth sexiness all the way to the repeat. Between these two tracks, one would wonder if this was made for a game or just a fun solo trip for the guitarists. Finally, "Red Bee", the true last boss theme, is still just as insane as ever. The live guitar samples carrying the "melody" are just superb, though the craziness of this might be a turnoff for some. An addition of a jarring synth solo before the repeat takes this otherwise bland (for the Dodonpachi series anyway) boss theme and turns it into insanity rivaling its sequel's TLB themes, perhaps even surpassing them.

I knew from the start that this album would be amazing. What I didn't expect was the time and effort that was put into really making this release a fresh arrangement of two somewhat dated soundtracks. The focus on grungy bass lines and insane guitar solos leaves a fan like me wanting nothing more, and becoming clearly trapped for what seemed like weeks listening to these amazing arranges. I encourage all fans of the originals to try this, as it holds very true to the original vision of the two featured games. It takes that ideal and expands on it exponentially however, creating one of Cave's best re-imaging soundtracks to date. Just try it. That's all I can leave you with.

Album was composed by Манабу Намики and was released on April 22, 2010. Soundtrack consists of 29 tracks tracks with duration over more than hour. Album was released by 5pb.. 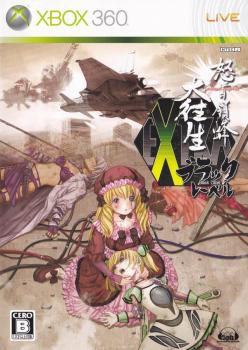