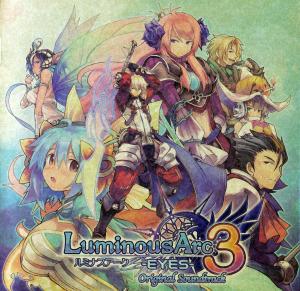 The Luminous Arc series continue with the third game Luminous Arc 3 Eyes, which was released on December 10, 2009 in Japan for Nintendo DS. Once again, Yasunori Mitsuda served as the sound producer for the title and, rather than outsource to external talent like Akari Kaida, he relies entirely on the internal composerrs of his sound production company Procyon Studio. From the former sound team of the series, surprisingly only Shunsuke Tsuchiya returns. Instead he gets assistance from a new composer to the series, Maki Kirioka (a.k.a. HeArt MakiArt), known for her work in the Tokimeki Memorial series, Zone of the Enders, Dewy's Adventure, and the recently released Guwange Arrange Album.

The vocal theme for this game, "Wake up World", is featured here in its full version. Composed and arranged by Maki Kirioka and performed by CHiCO, it is somewhat reminiscent of her exotic works on the Zone of the Enders series. The use of orchestral strings, fast-paced electronic beats, and haunting chorus stays true to the series' past theme songs. The vocals, especially in the chorus, are reminiscent of the late Eri Kawai's work; however, they can't reach her standards by any means. While hardly bad, it's definitely the weakest vocal theme from the three games. The second vocal theme "Magic Night" is composed and arranged by Shunsuke Tsuchiya and marks his first vocal composition to date. Sadly, the piece isn't very melodically memorable and the vocals of Aki Toyosaki are somewhat bland as well. It serves nicely as opener for the second disc, but that's all.

Shunsuke Tsuchiya's contributions vary greatly on this soundtrack compared to his works on Arc Rise Fantasia or Luminous Arc 2 Will, where he focused largely on militaristic and orchestral themes. The title theme "Chance Meeting" is a simple, but emotional composition based on piano and violin motifs. It sets the beginning of the story in a very charming way, similar to Yasunori Mitsuda's "Prelude" from the first game. The emotional tracks continue with "So That Your Wounds Heal", a woodwind-based theme that builds up an airy and peaceful soundscape, and "Embraced by the Cold Darkness", a slow-developing piano solo with a soft and fragile melody; however, the latter is a little unexciting given its consistency over its five minute playtime.

"Saint Baldia Kingdom" is a lively composition with a slight military tone, but overall the mood is very bright and serene with soft interludes of woodwinds and harp. It doesn't feature an awesome melody, but the developement is right on and nicely done. "Those Who Decide the World's Outcome" makes use of a church organ paired with synth choir to create a wicked and somewhat religious atmosphere. The two ending themes "World Reborn" and "Reflections in These Eyes" both make use of astounding orchestral arrangements too; while the first a gorgeous march-lie rendition of the title theme "Chance Meeting", the former is another example how Tsuchiya is able to create a very emotional atmosphere with a splendid melody and wonderful arrangement. In context, both pieces are some of the best he created thus far.

In terms of militarism, Shunsuke Tsuchiya also has some tracks to offer. The start makes "Before Raising the Song of Victory", a track with the strenght of furious strings and snare drums. While a bit repetitive compared to later following tracks it neverless manages to build up a feeling of tension and impact for the first moments of the game. The following track "Seized Fortune", a sort of victory fanfare, greatly developes into a engaging march with help of strong percussion and short, but sweet melody. Also it seems that Yoko Shimomura was an great influence for the composer as some of the pieces recall her style in some way. "The Decisive Battle I Yearned For" is the most frantic and fast-paced battle theme Tsuchiya wrote thus far. The overall arrangement of percussion, harpsichord and electric guitar riffs reminds heavy on Shimomura's contribution "Black Flames" from Luminous Arc 2 Will. Neverless a very exciting and unique track. "Knight of the Black Rose" is a Baroque-esque piece with harpsichord, violin and marching drums in the background while "Under Lapis's Eye" features an interesting instrumentation of strings, rock organ and groovy beats. "Confused, Swaying Heart" is another unique track which features some accordion and saxophone melodies. Tracks, which are also reminiscent to Shimomura in terms of style.

Half of the soundtrack features Maki Kirioka's compositions in addition to Shunsuke Tsuchiya. However, in terms of quality and memorability, her works aren't quite as strong as her co-composer's. Still, Kirioka is able to contribute some fine pieces throughout the soundtrack. Compared to Tsuchiya she relys heavy on electronic, percussive, and experimental arrangements, which tracks like "Crimson Sovereign", "Researchers of the Truth", "Loyality Devoted to the Black Rose", or "A Man Called Legend" show instantly. "Darkness Hidden at the Other Side of the Moon" attracts not only for its interesting title; the overall piece is very experimental and makes use of various harmonies and furious chord progressions through use of the "Crimson Sovereign" motif. Definitely one of the better pieces.

"There is Not a Sole Power" attracts with its frantic beats and fast melodic development. For an battle theme it's quite unusual, but the theme is still a lot of fun to listen to. Kirioka establishes a more orchestral with the bright march "Magus, Onward!", the slow waltz-like "A Dazzling Light Glittering", the dreamy and beautiful "Ephemeral Dream" and her best contribution to this score, the last battle theme "Defiance towards the Absolute Truth". "Defiance..." is an powerful orchestral arrangement in style of an Hitoshi Sakimoto with a lot of furious strings and brass segments; an interesting development comprising different tempi and frantic interludes makes this track to one of the most climatic from the album and from the composer too.

The remaining tracks range from mischievous ("Mood Maker", "Floating Soul Guide") or typical filler music ("Unshakable Anxiety", "Imminent Crisis"). However, two really beautiful piano based tracks remain, namely "The Sorrowful Truth" and "One Person, Standing Still". Both tracks rely on soft woodwind melodies paired with mellow piano chords to create an emotional yet sad atmosphere. The second, although the shorter of the two, is especially beautiful and serene.

The Luminous Arc 3 Eyes Original Soundtrack is definitely a soundtrack worth of the series. At first, I was rather sceptical with the absence of most of the former composers, but Shunsuke Tsuchiya proves that he can do marvelous things without the help of big names. Most of his contributions really shine here and help to rise the aesthetic of the music a lot, thanks to his efforts in using different styles and arrangements throughout the two disc set. Maki Kirioka showcases her diversity as well, though her contributions lack memorability compared to Tsuchiya's. Still, she composed numerous gems and helped to bring more variety to the soundtrack with her unique styles. Overall, a highly recommended soundtrack for fans of RPG-styled music. 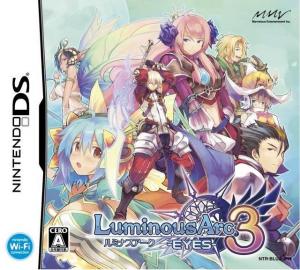