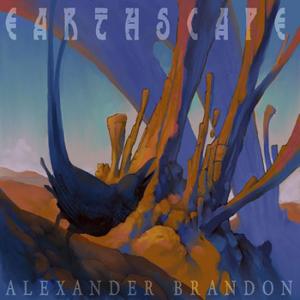 Following the modest success of the original album Era's End, eminent sound director Alexander Brandon decided to create a new release, entitled Earthscape. As the title implies, the album attempts to represent the cultures and colours of the world. The result is a stylistically diverse and surprising score which features some individualistic and resounding tracks.

A fantastic example of Alexander Brandon's individualistic approach comes in the form of the first track, "Severn City". Demonstrating his pop and jazz influences, Brandon allows the track to intoxicate the listener with its funky electronic background, simple but enchanting piano motifs, and overall enjoyable and captivating development... It is seemingly an ode to the musical approach taken in Era's End and is a good way to bridge the gap between the two albums.

The next track "The Scene" takes upon a much more retro style, replacing instruments such as the piano with a pulsing synth effect. The track's main asset though is its development, and really it's quite remarkable what it becomes. Starting off with a simple synth line and beat, the first notable development comes in at 0:41 with the introduction of a mesmeric melody made up of sustained notes. Further on from this, Brandon introduces a firewire synth at 1:11, completely electrifying the piece, and taking it a step away from the ambient piece of music that it was becoming. Following a tantalising and sporadic affair between the background and foreground synth, Brandon then leads the track back into an ambient setting, with the use of softer string sounds. It's a journey that can't be described to its full effect by words as such, so it's definitely one you need to listen to experience the full soundscape.

Also featured on the soundtrack are a selection of relaxing and feel-good themes. On the modern side, the upbeat "Broadway" starts off energetically, but soon transforms into a cool jazzy piano track with sound effects thrown in. Its ethnic counterpart "Caribbean Blue" is a fantastic experimental track made up from ambient low bass sounds, warped synth, and creative sound effects. A bit more impacting and memorable than these, the earthy "Funky Rustic" is one of the most enjoyable tracks. Starting with a rocking guitar riff, the track soon leads into its inspirational main melody and fascinating funk rhythm. Alongside this, the authentic percussion made up from tom toms, clicks, and other wooden sounds provides the rustic edge which the track title suggests. Make sure you don't miss the futuristic neighbour to this piece too; "Alba" is a fast-paced, hard-hitting, and filled with memorable melodic goodness and creative development.

Complimenting this set of themes, you may also be interested to know that the album features two vocal themes on either side of the ethnic/modern border. "March of the Maasai" is a distinctively tribal vocal piece with heavy percussion and use of very rustic instrumentation which you are sure to enjoy. Its futuristic competitor, "Square Mile" takes upon an electronic style with the use of a heavily edited and warped vocal part and drum kit beats. These two vocal themes prove to be fantastic additions to the album, and are written with surprising expertise, despite being influenced by two separate stylistic backgrounds.

Overall, Earthscape is an inspired original album. Brandon created the album in response to the current stagnation of the pop music market and intended to return to an earlier time when music was more creative. He was successful to a considerable extent and managed to offer a fascinating blend of worldly colours and stylistic influences. The overall album is quite brief and straightforward, but still mostly a delight to the ears.

Sounds like Electronica - that's what we can say about this album.