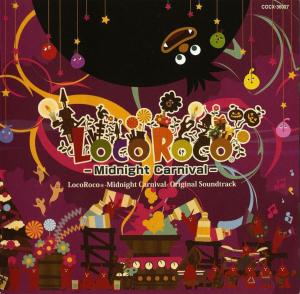 In 2009, the LocoRoco series continued with a devilish spinoff called LocoRoco: Midnight Carnival. Though not a big seller, LocoRoco: Midnight Carnival proved as enjoyable as its predecessors with its hybridised gameplay, cutesy visuals, and addictive soundtrack. Once again, Nobuyuki Shimizu and Kemmei Adachi returned to compose and perform the majority of the soundtrack. They were joined by Tadashi Yatabe, who is responsible for arranging many reprises from the original score.

Like its predecessors, the LocoRoco: Midnight Carnival soundtrack is dominated by vocal themes sung in a completely fictional language, known as the "LocoRoco Language". This is a full-fledged "language" sounds just amazing when sung. The album consists of several different singers who each represent a color of LocoRoco from the game. The "Mui Mui" and their evil counterparts, the "Bui Bui", sing most tracks that the LocoRoco don't sing or back up the LocoRoco with their helium filled voices. Once again, the fact the game was created for the PSP is not a significant limitation, since the console's audio capacity was pushed to the limits with streaming technology. As a result, the vocals sound as distinctive and clear as they did in previous titles.

Kemmei Adachi's main theme for LocoRoco: Midnight Carnival immediately sets a distinctive tone for the game. Unlike previous main themes for the series, this track has a firm jazz emphasis. All sorts of bold trumpets and sassy saxophones provide an infectious backdrop for the theme. The LocoRoco meanwhile sing along in a jubilant party-like manner. The final result is both incredibly infectious and also stylistically accomplished too. Nobuyuki Shimizu's ending theme "etoule pucoratte!" also retains the jazzy emphasis, but has that eccentricity and cutesiness that is generally considered synonymous with the series' music. It's wonderful how all the different vocalists from the soundtrack come together to create a spectacular ensemble effort.

Once again, the character themes of LocoRoco: Midnight Carnival are among the major highlights. Those who feared that the traditional character themes were getting old should feel comforted by the arrangements here. The pink LocoRoco theme "consepontowa", for instance, sounds better than ever in its mild bossa-nova arrangement and French-influenced lyrics. Red's theme "panguraratta" is a tongue-twisting as ever, yet sounds even better than usual with its greater reggae influences. The returning vocalist is so impressive. Plenty of other themes return, such as Yellow's youthful pop-influenced "bu bu poruche", Black's disco-styled "zappudo geron", or Green's bold rocking "bucho mio", all with fresh arrangements and solid performances.

The remaining arrangements tend to emphasise the jazz feel of the soundtrack. It's very impressive how Tadashi Yatabe is able to transform tracks like "pupapu poapoa" or "yoi yore" into relaxing lounge-styled pieces. They just set the unique tone for the soundtrack nicely. Nevertheless, there are plenty of more 'out there' arrangements such as the retro funk-influenced take on the Mushroom Forest theme or the dynamic bluegrass interpretation of BuiBui and the Big Tree. They are generally compatible with the original melodies and expertly executed. Of course, a Midnight Carnival wouldn't be a LocoRoco soundtrack without an interpretation of "LocoRoco's Song". This time we get an all star march-styled arrangement featuring all seven LocoRoco, including Purple. It's not one of my favourite arrangements, but nicely completes the soundtrack regardless.

To finish, the LocoRoco Midnight Carnival Original Soundtrack is just as enjoyable as its predecessors. Plenty of old favourites return, from the character themes to the marching song, all in fascinating new arrangements. In addition, a fresh new layer is added to the soundtrack with the jazzy emphasis of the new main themes and certain arrangements. It's impressive how the technical quality of the soundtrack did not drop with this spinoff and how the series still manages to be musically ingenious despite being at its third instalment. If you enjoyed previous LocoRoco soundtracks, pick this one up.