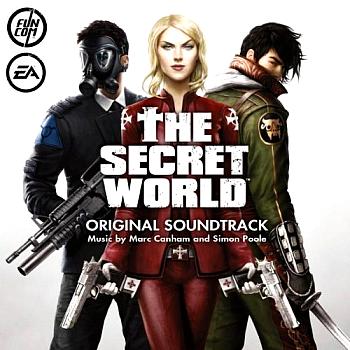 With The Secret World, Norwegian developer Funcom delivered a brand new massively multiplayer online game (MMO) to considerable publicity after their success with Anarchy Online or Age of Conan: Hyborian Adventures. The creative mind of Ragnar Tørnquist — creator of the award-winning The Longest Journey and its sequel Dreamfall — designed the game. However, the music was primarily composed by Marc Canham, best known for his work on titles like Far Cry 2, the Driver series, and the praised thriller The Disappearance of Alice Creed. He worked alongside Simon Poole, who has been sound director at Funcom since Dreamfall. Let's take a look at the musical secrets within...

The main theme "The Secret World", co-produced by Simon Poole and Marc Canham, introduces the listener to the mysterious game. Inspired by Philip Glass, the track developers a minimalistic soundscape revolving around some echoing piano chords and haunting female vocals. With the mystical atmosphere established, the music carefully builds a more adventurous tone with the use of orchestral elements, mainly strings, that perform a sweeping melody. Around 1:14, the theme calms down and the first section is repeated by piano, acoustic guitar and bass, until it fades into thin air, as mystical as it began. The opener is definitely one of the best and lighter tracks of the somewhat dark and brooding soundtrack, and starts the soundtrack fantastically.

Mark Canham is the main composer the score and, while he maintains the minimalistic focus, his musical palette is pretty diverse here. His first contribution "March On Templars" continues the story in a smooth and seamless way after the opening track. Dedicated to the first of three societies of the world — the ancient guard the Templars and their crusade against darkness — it focuses on heroic melodies with string and brass elements. The theme slowly builds up to a short, understated climax, after which the piano takes over to perform a short, but beautiful interlude. With "Factions", Canham takes his main theme and transforms it into an sweeping and slow developing masterpiece. After the haunting introduction, we can hear first glimpes of the echoing piano theme, first heard in "The Secret World", at 0:38. At 1:18, a little bit of Eastern flair is added with Taiko drums and Chinese plucked instruments. Then the music slows down and the atmosphere is kept in an mystic way with echoing woodwinds and acoustic guitar. At 2:18 the orchestra shows up again and performs the main theme beautifully on strings, until the piece ends on a familiar note. Another excellent track!

Apart from the orchestral and ambient material, Marc Canham contributes some exotic vibes here and there to illustrate the visuals with an appropriate soundscape. These themes mainly accompany the second society, the Dragon, a neutral and patient Chinese organisation. "Dragon Considers" introduces us to this style softly with Eastern instruments, which perform a two note motif over and over again, accompanied by piano and wood percussions. Overall, the theme stays very reserved and thin, until it receives a bit more developement at 1:50. It's charming on its own, but there are definitely much better tracks, like "Sand Meets Sky" or "Harababuresti Dances", which make use of richer instrumentation and serve as stunning atmosphere setters. While the former has a distant Medieval vibe with its plucked guitars and exotic percussion, the latter builds consistent rhythms by pairing piano chords and percussion, overlayed with some plucked instruments. Very enigmatic.

Now let's talk about the action material on The Secret World. Marc Canham has some very interesting themes to offer here as well. "Combat, Pt. 7" opens hypnotising with yet more ambient sounds and synth arpeggios, but don't fall asleep yet! The real action begins around 1:55, where a strong bassline and hammering percussion appear to build up the tension very nicely. I love those slow building up sections! Finally, at 2:55 brass and string passages free us out of the misery and perform a stunning dramatic passage. While the brass performs deep and emphatic notes, the strings are about to underlay the theme with slow, but powerful melodic passages. It's one track that emphasises the experience and artistry of Canham's production team — the Nimrod Session Orchestra breathe life into each phrase and are recorded in crystal clear sound quality.

Nevertheless, the aforemnetioned track is unable to hold a candle on "Combat, Pt. 6". It opens in a similar fashion as its cousin, but this time with a lot more depth and emotion. Slow strings guide the way to the top, underlay with haunting ambient sounds and bass and piano fragments. At 1:47, the beat kicks in like a heartbeat and strings slowly build up the atmosphere. At 3:06 the strings perform another sweeping melody line to prepare for the climax a few seconds later. Loud, brutal brass joins forces with the strings and the percussion gets very intense, too. The last two minutes are absolute highlights of the theme and soundtrack as well with pure adrenaline power. Definitely one of my favorite tracks! "Combat, Pt. 3", is definitely the weakest of the featured action tracks. The overall atmosphere of the percussive introduction is very mysterious, but compared to the previous two themes it can get a bit dull after a while. Even during the guitar-based buildup at 1:40, things soon seem to stand still. The track can even grow irritating with its overpowering bassline, especially from 2:30 onward. It's not until 3:19 where signs of development appear, even if it's in similar fashion as the other tracks.

Marc Canham's remaining contributions mainly cover the dark and brooding ambient nature. This style, while beeing not really my cup of tea, has spread over in nearly every game is this genre, especially from the Western shores. And it's definitely a feature which works mostly within the context of the scenery itself, though on a stand-alone basis there are a very few tracks which are interesting on their own. "All the Time We Have" incorporates an organ and echoing chimes to create a surreal atmosphere with a bittersweet melody, while "Our Town" sounds very desolate and cold with synth arpeggios and guitar noises. "A Still Surface" even incorporates some action elements via electronic bass and beats, but overall sounds way too sterile. His last two tracks close off the soundtrack in a dark and atmospheric aura, mainly focused on piano chords paired with surreal ambient layers. While repetitive, they neverless manage to build up the atmosphere.

In addition to serving as sound director, Simon Poole supplemented the soundtrack with several compositions. "In Golden Light" takes a similar approach as "The Secret World" with its haunting atmosphere. The second half, incorporating female vocals, is especially well done and leaves one longing for more. After "The Black Land", he continous the darker style style with "Through the Hollow Earth", the theme for the legendary city of Agartha, which lies within the earth's core. Even scarier than the previous track, it has far more depth within the developement of haunting vocals, high pitched strings and, during the second half, deep brass elements. His final contribution "A Building Storm" sets a similar mood, only with a thicker soundscape of windy ambient sounds and mournful vocal segments. It is accompanied by some harp arpeggios, piano, and what sounds like deep electric guitar noises towards the second half and its conclusion. And so the soundtrack ends with this haunting piece, showing the saga is far from over.

In the end, The Secret World has more to offer than you first might expect. True, most of the soundtrack is very dark and sinister, but that's also the nature of the story itself. It's full of real life locations, even some mystical and legendary places, paired with a dark plot — no fairytales, just pure reality! Most of the music here is not too pompous or bombastic like those created by most veterans of the Hollywood music scene. Instead, it stays true to the visuals and relies on it's aesthetic and atmospheric nature. Marc Canham and his production company take a more experimental approach, drawing influences from minimalist and ambient music. It may be not as colorful as Far Cry 2, but the score serves its purpose well and even features some highlights within. I suggest you to check it out if you're a fan of this genre!