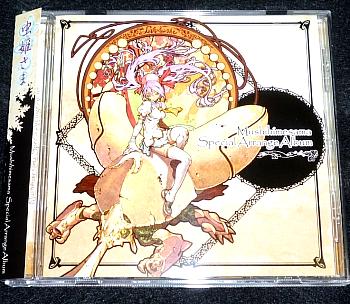 The Mushihimesama Special Arrange Album was included in the limited edition of the Xbox 360 version of Mushihimesama. It features Manabu Namiki's original compositions arranged by the remaining composers of Basiscape, sans Sakimoto, for a special game mode. These are looped in-game arrangements, rather than full-length transformations like those featured on the Mushihimesama Double Arrange Album, though the final result is still interesting. How does it turn out compared to the original?

The album opens with the select music "The Princess, Age 15," arranged by Kimihiro Abe. The arrangement still sports the festive nature of the original and I particularly like the new rhythm Abe incorporates; however, Abe includes some softer strings moments that serve as a bridge before the loop. The first stage theme, "To Shinju Forest," is handled by Mitsuhiro Kaneda. In general, I think that he does a great job at retaining the spirit of the original while making it a bit more intricate as well. There are still those playful and mysterious moments in the track, but at the same time, what Kaneda does with the harmonies is what truly makes this theme stand out. I really like the focus on woodwinds and the simple improvisation on the main melody that helps give it an airier and freer sound.

Masaharu Iwata, who was a co-composer of the original soundtrack, arranged several of his original tunes. His reinterpretation of the stage two theme, "Furthermore, Cross the Desert Too," is an intriguing one. The original atmosphere is clearly retained; however, I find that Iwata's synthesized instruments here sound a bit weak, especially the violin lead that takes over the majority of the melody. In addition, he also adds some tribal chanting tones that don't really do much for the theme. The third stage theme, "Walking on the Land of Flame" is a synth rock arrangement that does a better job of entertaining; however, once again, his synthesized horn sounds a bit off as well. Fortunately though, it's not as prominent as the strings in the previous track.

Chiba's main contribution is the stage four theme, "Like a Night of Falling Stars." When it comes to Chiba's take on the original, she manages to maintain the calming and delicate atmosphere of the original through the use of piano, strings, light electronic harmonies, and a beautiful synthesizer melody; however, at the same time, she adds a heavy dance beat to give the track a bit more oomph. Despite this, I think the track is very successful and doesn't really hinder the extremely delicate original. Yoshimi Kudo's "The Direction to the Heart of the Forest" is one of my favorite arrangements of this theme. While retaining the airy spirit of the original, Kudo adds a stunning jazzy piano accompaniment line that really accentuates the theme as well as make it a bit catchier. In addition, he also incorporates a beautiful lead guitar line and some distorted synthesizer in the accompaniment during the slower tempo portions of the track.

Abe's other arrangement is of the boss theme, "Levi-Sense." Compared to the original, which harbored a sinister sound, his version is much less intimidating, but still a lot of fun. Abe turns the original into an extremely groovy theme, thanks to his unique treatment of the bass line accompaniment. In addition, the combination of synthesizer, saxophone, bass guitar, and strings samples together to accentuate this groovy nature while still retaining the spirit of the original. One of the shortest tracks on the soundtrack, Chiba's stage clear theme "Enough about That!" has a very victorious, yet calming, atmosphere that really captures the essence of the original.

Kudo handles the final boss theme, "Is This How You Are?", with stunning results. His version is very sinister thanks to chaotic and frenzied rock/synthesizer accompaniment. However, what I find most intriguing about his arrangement is the main melody line. It's a very unique sound, almost like a high-pitched electronic tone that reminds me of hyper-manipulated operatic vocals. Kaneda thereafter handles the true last boss theme, "Requiem of the Sky." While the original was almost mournful in tone, Kaneda's version differs a bit. While it still keeps the same overall soundscape, the focus on woodwinds in the melody line still manages to get the message across. In some ways, it also is a bit more creative in terms of execution, as Kaneda adds some more industrial tones, giving way to a slightly sinister atmosphere.

Iwata suitably closes the soundtrack with the ending theme, "I Have Something to Ask You." This theme has a spaghetti western sound, focusing on rustic acoustic guitar and whistling for the majority of the track. The deep cello accompaniment is a bit off-putting though, clashing with the delicate nature of the rest of the track. There are also some non-lyrical vocals added into the mix. At times, all of these elements clash and sounds quite unfocused. The name entry theme, "Starfall Village" by Chiba, creates a playful, jazzy sound to it through a combination of acoustic and electronic samples. Lastly, "360 Menu," is the only original tune on the album, although it does borrow themes from the original soundtrack. The theme itself is a very stunning interpretation of the main motif heard in the stage one theme. Beautiful choral samples, light electronica, and strings come together to craft a very soothing listen and it's a great way to close the soundtrack.

Overall, I think that most of the composers did a good job reinterpreting the music for the new game mode. Kudo, Chiba, Abe, and Kaneda do a great job at retaining the spirit of the originals while changing their tracks to give it a new unique identity. However, I find that returning composer Iwata didn't always do his soundtrack justice, due to a lack of focus in terms of the number of elements in his tracks. Overall, it's a good listen, but does come up lacking due to the aforementioned reason.

Enclosed in the limited edition of Mushihimesama HD

Album was composed by Манабу Намики / Масахару Ивата and was released on May 24, 2012. Soundtrack consists of 14 tracks tracks with duration over . Album was released by Cave. 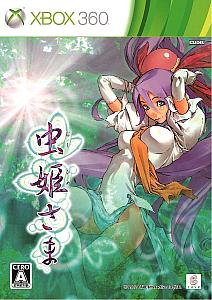