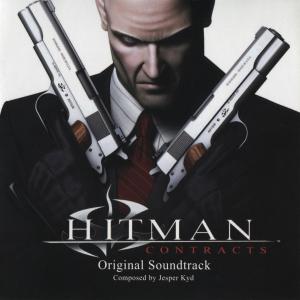 Jesper Kyd took the score for Hitman: Contracts in a significantly different direction to the previous Hitman games. He decided to focus exclusively on electronic ambient music for the first time in the series, having previously offered a large number of orchestrations too. In addition, the score had a darker mood and more psychological focus than earlier games. The resultant score received some criticism from orchestral score junkies, but it will nevertheless be impressive for those looking for sophisticated and immersive electronica. The Hitman Contracts Original Soundtrack is the full commercial release of the score, courtesy of Sumthing Else Music Works.

The opening track, "White Room & Main Title", is pretty representative of what to expect from the title. As with earlier Hitman scores, Kyd offers a strong rhythmical impetus here and layers forces in a distinctive, slightly perplexing way. The focus, however, is on a web of electronic beats and synthpads that interweave to create a deep, dark aural setting for the game. Later on in the track, Kyd integrates some chants Hungarian Radio Choir but, rather than let them become the focus of the track, he obsessively loops them and integrates them within the electronic beats to give a subliminal effect. The final result is highly successful on two levels. Superficially, it is catchy and compelling in an unconventional way. However, it is even more impressive from an artistic perspective for the psychological impact it has in context.

The Hitman: Contracts soundtrack has more in common with a survival horror score than an action thriller. "Slaughterhouse", for instance, is an utterly frightening accompaniment for a grotesque location; following the minimalistic electronic introduction, Kyd builds develops this composition over a six minute period and punctuates it with screeching prepared instruments and mechanical percussion loops. "Hong Kong Underground" is another highly percussive track that seems fitting within a dark, urban labyrinth; Kyd even integrates some traditional instruments here to represent the Asian setting, to interesting if not necessarily authentic effect. "SWAT Team" meanwhile creates a sense of urgency with its rapid and pounding beats. It's highly impressive how the game's audio team were able to punctuate the beats in such a lively and aggressive way here, bringing a human element to an inorganic soundscape.

Kyd certainly seemed to use the Hitman: Contracts soundtrack to revisit and explore his routes as an underground electronic artist. Compositions such as "Slaughter Club" and "Budapest Bath Hotel" definitely enhance the atmosphere of their respective settings, but it is clear that Kyd intended them to be much more than merely functional. Instead they aspire to be sophisticated and experimental pieces of electronica in their own right. The former has more mainstream appeal than most tracks on the score with its tight electronic loops and dazzling vocal elements. "Budapest Bath Hotel" meanwhile is cold, minimal, and abstract, appealing to those looking for psychologically explorative music out there. Indeed, the whole album is fascinating on a stand-alone basis, but these tracks seem to be especially special.

There are four exclusive compositions on the Sumthing Else Music Works edition of the Hitman: Contracts soundtrack that weren't featured in the promotional score. These additional compositions aren't quite as interesting or unique as those elsewhere on the score, but are still excellently done. "Weapon Select Beats" and "47 Detected" have an even more aseptic feel than the rest of the score and may be too sparing for some, though nevertheless introduce some abstract industrial components to the score. "Winter Night" stands out as another cold, slow-building ambient work and was significantly impacting in context to be worthy of a place on the score. "Double Bailers" finally is the most intense and action-packed composition on the score with particularly dissonant string and chorus loops.

Overall, Hitman: Contracts is an excellent example of an electronic ambient score. Kyd's approach provides a fascinating insight into the hitman's mind and a fitting accompaniment to his espionage experiences. What's more, this ambitious score transcends the bounds of functionality by being an interesting and emotional listen on a stand-alone basis too. The major compositions for Hitman: Contracts are available on both the promotional and commercial soundtrack release, though the additional compositions here are quite interesting and complete the experience.

Here you can freely listen to preview tracks from Hitman: Contracts Original Soundtrack. Album was composed by Джеспер Кид / The Hungarian Radio Choir and was released on April 20, 2004. Soundtrack consists of tracks with duration over more than hour. Album was released by Sumthing Else.

Sounds like Classical, Electronica, Ethnic - that's what we can say about this album. Tracks preview provided by iTunes. If you like Hitman: Contracts Original Soundtrack, we strongly recommend to buy it. Support composers, artists and performers so they can release more music in the future. Prices and shops where you can buy it are at the right column. Notice, Deezer gives you opportunity to freely listen to this album. Absolutely legal. Without violations.