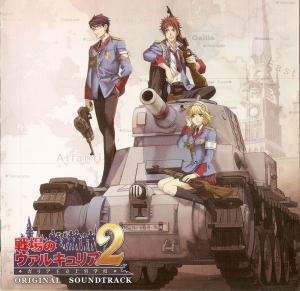 Valkyria Chronicles 2, the sequel to the PlayStation 3's Valkyria Chronicles, was released solely for the PSP in January 2010. Once again, Hitoshi Sakimoto is the sole composer and he streamed a variety of orchestral tracks for the score. Does the lessened production capacity of the PSP show affect the quality of the soundtrack? Can Sakimoto successfully integrate the light-hearted 'school days' feel permeating the sequel with the more mature sound heard in its predecessor?

In no place is the more localized, light-hearted feel of the game heard better than in the opening track, "Valkyria Chronicles 2 Main Theme." The track opens accompanied by bells heralding a new day of school, and the melody evokes feelings of an academy. The use of woodwinds, here and throughout the lighter tracks on the album, help drive the cheery, youthful feel. This track is definitely not as heavy-handed or mature sounding as the theme from the first title, found on this soundtrack by the same title used there, "Valkyria Chronicles Main Theme," but this is not to its detriment. As seen by other, similarly cheery tracks, such as "Theme of Class G," Sakimoto effortlessly combines a more mature feel with a playful melody, deftly incorporating a complexity rarely heard in pieces of this nature. The most youthful sound is heard in "Are We a Spoiled Class?" A careful listening will reveal, however, that here too the childish melody is faithfully supported by a complexity that meshes well with the overall feel of the track, such as descending chromatic chords in the woodwinds, and an enjoyable percussion line.

The Lanseal tracks offer vastly differing looks at the game's academy in light of different seasons. Each track offers a completely new melody, fashioned around the time of year that their track names belay. The piano in "Winter in Lanseal" helps establish it as a quiet, soft track, while the percussion evokes the feel of snow and ice. "Spring in Lanseal" is a significantly more lively track, a feeling brought about by the bouncing strings, flute and slightly chromatic melody. The title's man theme makes a welcome appearance halfway through the track as well. The percussion in "Summer in Lanseal" gives off a visual image of an academy on the beach, but there's also a more serious feel injected into the track, perhaps indicating an evolving storyline, steadily reaching a more dramatic point. Finally, "Autumn in Lanseal," while softer and lighter like its winter counterpart, features a much more serious, almost downcast melody. The game is certainly nearing its conclusion, as are the character's lives in the academy.

Similar to its predecessor, the battle tracks feature rather prominently throughout the album, many possessing a hopeful element in their melodies. "Exciting Battle" is among the first tracks heard, and it is just as exciting as its name intimates. A xylophone is heard frantically beating away in the background as the strings play arpeggios introducing the track. The percussion is heavy and militaristic, an element brought over from the first title and retained throughout here. "Practice Battle" is not nearly as frantic. The strings are more subdued and less flamboyant, though still relatively active. This is certainly a track for getting one's feet wet with battles, as the title insinuates. "Liberation Battle" is a very hopeful track with menacing overtones, highlighting the fact that victory is possible, but not assured.

Even the game's final battle track, appropriately named "Final Battle" is, much like it was in the first game — predominately hopeful. The track opens with stunted, chaotic sounding choir, which Sakimoto seems particularly fond of using in his final battle tracks (See: "Last Boss" from Deltora Quest The Seven Jewels Original Soundtrack). The main theme is present in this track, mirroring similar usage of the first game's theme in its final battle, and it is this theme's presence which gives an air off hope, hugely offsetting (and blending in tremendously well with) the previous almost chaotic, rambunctious, but nonetheless enjoyable, melody.

Unfortunately (or fortunately, depending on how you look at it) nearly half of the battle tracks, and indeed, quite a few of the tracks present on the album are taken directly from the first game. They are given the same titles here that they possessed then, with the exception of "Ship Battle," which is actually the final battle track from the first title. Of the reprised themes, "Street Battle," "Defense Battle," "Decisive Battle," and "Theme of Valkyria" are a few shining examples. The only track arranged from the original version is "The Succeeded, The Lost," a bombastic arrangement of the vocal track from the original game; while it was beautiful there, it feels a bit forced here. The reprised tracks are all typically very good, and are excellent highlights of the first game's soundtrack, but they comprise such a large amount of the tracks present that one familiar with the first games music can't help but be a bit disappointed.

Returning to the new music, I would like to draw special attention to "Theme of the Rebels," a track that is beautifully chromatic and one of the better villain themes I've heard in some time. It is somewhat slow and plodding, but it works. This is in contrast with the other villainous theme, "Gassernal's Ambition," which is actually somewhat boring, featuring no real development and heavy, drawn out, menacing chords. The ending themes, "Graduation" and "Farewell, My Academy," are both beautiful, soft pieces that excellently close the tracks heard directly in game. Both feature the main theme intertwined with the melody at some point, the latter being a piano solo piece that exhibits emotional power instead of that of volume.

The album closes with four diverse arranged renditions of themes from the game created by the Basiscape team. "Exciting Battle ~Arrange Version~" is certainly the most drastic example of this, being a jazz arrangement of the original track. Kimihiro Abe offers a very fun, bouncy interpretation with some highlights throughout. I can't help but think that there were tracks more deserving of this kind of arrangement, considering how prominently the main theme figures into this track, though. Thankfully, the main was arranged on its own too. And what an arrangement it is! Noriyuki Kamikura's "Valkyria Chronicles 2 ~Arrange Version~" is different enough from the original version to really be worth a listen. It starts off much softer and due to this has its own elegance about it that causes it to stand out on the album. The track build in fervor as it proceeds and settles down as it ends, breathing a dynamic feel into the melody. Yoshimi Kudo's "Practice Battle ~Arrange Version~" is likely the most playful piece on the soundtrack, featuring lively, almost ecstatic percussion. Finally, "Theme of Class G ~Arrange Version~" is an excellent Celtic styled rendition of the original track by Azusa Chiba, a genre that Basiscape certainly does not utilize enough. It sounds fantastic here, and is not to be missed.

The Valkyria Chronicles 2 Original Soundtrack is quite similarly styled to its predecessor's soundtrack. This time playful tracks are more frequently spread throughout to demonstrate the more light-hearted, localized story of the sequel. The quality of the sound does not diminish to any noticeable degree in the switch to portable device, though only one of the fully orchestrated tracks are exclusive to the sequel, and the rest are instead reused from the first game's soundtrack — a recycling that is indeed this album's only real noticeable flaw. If this repetition does not bother the reader, then a point may be safely added to my overall score, as indeed the original tracks are quite exemplary, and, combined with the intrinsic value of the reused ones, create a truly respectful soundtrack. While it might not make as much of a splash as the first title's album, it might yet be regarded its equal.

Promotional Piano Score Production
Yoshimi Kudo, Azusa Chiba
Album was composed by Хитоси Сакимото and was released on January 27, 2010. Soundtrack consists of 47 tracks tracks with duration over more than 2 hours. Album was released by Basiscape Records. 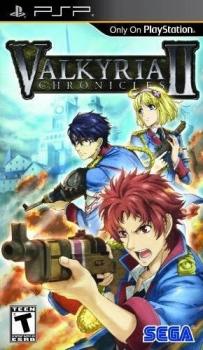