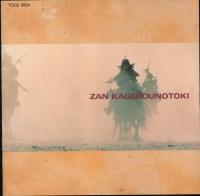 Zan: Kagerou no Toki was a game developed in 1990 for Telenet by Wolfteam for the X68000. It features Motoi Sakuraba in one of his earliest gaming works, as well as others included in the Sergeant Wolf Band. This album features both the original sound version as well as a few arranged pieces by various artists such as Noriyuki Iwadare of Grandia fame.

Wolfteam member Masaaki Uno helps Motoi Sakuraba with this soundtrack, but his contributions are unfortunately a mixed bag. "Decisive Battle" has a lot of build up but it doesn't really sound like a traditional battle theme. It has an atmosphere of suspense throughout and it's a bit sedate overall; there are some nice melodies and the accompaniment has that pulsating notion, but nothing ultimately developed. "Encampment Under Moon" is a slow low-key track that exudes an atmosphere of suspense and mystery. The melody is nice, but once again it doesn't really develop much. "Expedition Through Snow Flakes" has a very determined sound to it created by the militaristic accompaniment, but unlike previous offerings, the melody in this one is rather boring. Fortunately, some of Uno's later contributions are worth a listen. "Tears of Mortification" is a very peaceful track that boasts a nice melody. The atmosphere is very somber and, fortunately, there is some development in the form of some harp arpeggios that keeps this track from feeling entirely repetitive. "Spring of His Life" is another great Uno piece. It harbors a very happy, bouncy melody and probably serves as the ending theme. It develops nicely throughout the piece, creating some peace as well as some heroism. It ends his contributions on the soundtrack quite nicely.

Motoi Sakuraba, on the other hand, doesn't really offer too much better himself. "Age of Heat Haze" is a very diverse piece. At times, it's militaristic, while at others, very peaceful and ethereal. The sound effects towards the end of the piece sort of drown out the music, but overall, it's a very nice effort for what is most likely the opening theme. "Intrigue" is a slow, simplistic piece that reminds me of Star Ocean music for some reason. It has a very mysterious atmosphere to it and a nice melody, but little more. "Melee" is typical fast-paced Sakuraba with some prog rock influences, but the melody doesn't really stick to the listener too well and it's one of his weakest contributions on this album. Entirely skippable, sadly. "A Turbulent Age" and "Ephemeral Dream" both offer strong melodies and hopeful atmospheres, but repetition is to their detriment. "Marching Under Sunshine" is another slow piece that definitely is a misnomer. It doesn't really have a marching atmosphere, but it does have a bit of a drive to it. The melody is fairly standard, but it is a lot better than some of the slower pieces heard on the album. Unfortunately, nothing of Sakuraba's ultimately sticks out this time around.

The arrangements on this album are spearheaded by four contributors. Takao Sugiyama offers two. "Age of Heat Haze" is an arrangement transforms the piece into a much more ethereal creation. Dreamy sequences combine with brass lines and a strong focus on percussion to craft a fairly decent arrangement that accentuates the strengths of the original. Fortunately they don't keep the sound effects! His other arrangement, "Intrigue", takes on an almost classical approach. A focus on strings and brass makes this sound especially like Star Ocean, just like the original. It's a very nice arrangement that accentuates the strength in the melody while retaining the atmosphere of the original. Unfortunately, Takao Mirato only offers one arrangement, as I find his to be rather fun and entertaining. Mirato transforms the rather lackluster "Melee" into an awesome fusion of Asian influenced instruments and rock elements. A much more energetic and driven take on the original and one I will gladly go back to.

Noriyuki Iwadare, the only prominent arranger on this album, offers two arrangements as well. "All Year Round" is a medley of arrangements for the pieces "Ephemeral Dream," "Marching Under Sunshine," "Encampment Under Moon," and "Expedition Through Snow Flakes." The first part of the arrangement, "Epheremal Dream," keeps the bubbly counterpart heard in the original by replacing the instrumentation with a nice flute portion. It is, however, fairly straightforward. Transitioning to "Marching Under Sunshine," this arrangement definitely places a focus on a marching motif, while at the same time keeping the slow, melancholy sections of the original before focusing on the drive. The "Encampment Under Moon" arrangement is rather straightforward and retains the atmosphere of the original while upgrading the instrumentation. The same can be said for "Expedition Through Snow Flakes" which places a strong focus on a militaristic percussion to enforce a sense of drive and determination. Iwadare is also able to improve upon the melody much more, adding little nuances here and there. His other arrangement, "Tears of Mortification", is a typical translation of an arrangement. Iwadare takes the original melancholy piece and arranges it for piano and violin. In addition, he adds a bit of a militaristic percussion pattern to accentuate the melody of the piano and violin. His arrangements, while enjoyable, arre fairly straightforward.

Hiroshi Fujioka is another surprise for me. Offering three arrangements, he proves to be my favorite overall arranger on this album. "A Turbulent Age" is my favorite. It fuses together a flamenco guitar melody, some futuristic soundscapes, and a bit of progressive rock in the percussion line. It's an exhilarating experience and makes me wish the arrangement was longer. Interestingly enough, it works together with his "Decisive Battle" arrangement perfectly. This is another vast improvement over the original. It retains the futuristic soundscapes heard in "A Turbulent Age," while placing a focus on electric guitar for the majority of the arrangement. There are also some slower string sections, but for the most part, it's a fantastic, exhilarating arrangement. "Spring of His Life" is another fairly straightforward arrangement that accentuates the elements of the original. It still contains those bouncy sections and heroic sections, but adds a bit of etherealness to the mix. Fortunately, towards the end of the piece, Fujioka decides to grace us with a nice little guitar solo that bridges back to the beginning quite nicely. The transition from electric guitar to ethereal piano is quite nice.

For the most part, Zan: Kagerou no Toki is a rather mediocre album. Many contributions from Masaaki Uno and Motoi Sakuraba fail to stick out, although Uno offers two of the more memorable pieces on the soundtrack. Fortunately, the redeeming factor lies within the arrangement section of the album. All four arrangers do a fairly good job and upgrading and elaborating on the originals. Sure, Iwadare may have taken a more straightforward approach, but his medley is nice and helps to enhance some of the weaker pieces on the soundtrack. Hiroshi Fujioka was the surprise on the album for me. His variety of styles helps to rejuvenate many of the pieces he arranged and made them actually listenable. Overall, I wouldn't really recommend purchasing this album given the high price, though it may be worthwhile for collectors nevertheless.

The first 8 tracks are arrange versions. The remaining tracks are from the Sharp X68000 version of the game, which was ported to countless platforms.

The full tracklist for track 4 is:
All Year Round - Ephemeral Dream
Marching under Sunshine
Encampment under Moon
Expedition through Snow Flakes
Album was composed by Масааки Уно / Мотой Сакураба / Sargent Wolf Band and was released on March 21, 1990. Soundtrack consists of 24 tracks tracks with duration over about 55 minutes. Album was released by Toshiba EMI.