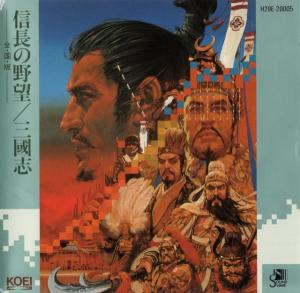 Mere months after completing her first full album (Nobunaga's Ambition: Tales of the Sengoku Warlords) in the spring of 1989, Yoko Kanno was asked to revisit her two earliest game scores at KOEI for the purposes of an arranged album. They were 1985's Romance of the Three Kingdoms and 1986's Nobunaga's Ambition: National Edition, two popular historical games released for early computers. Kanno had learned much in the short time between the albums and her efforts here prove as much. Her command of the orchestra, whether live or synthesized, is fuller, more assured. Her cues are longer, more muscular, her vocal tracks impressive and unique, and her budding knack for experimentation and thematic development begin to show themselves. She worked strictly on her own arranging the scores for this release, but was joined by synthesizer operator Mitsuo Yamamoto and a team of performers for the recording sessions.

The split between the two games lends the album an ingratiating dichotomy in sound and texture. Both are somewhat similar in that they employ a unique melding of traditional and classical styles and inflections from European and Asian music. However, Nobunaga's Ambition: National Edition leans heavily on the former with its dignified, militaristic fanfares and anthems, whereas Romance of the Three Kingdoms is dominated with Asian instrumentation and style. Both carry flavorful hints of the other while still asserting their own unmistakeable musical identity, glossing the entire album with a wonderfully consistent texture even as each track wildly deviates from the next. That Kanno could accomplish such a feat this early in her storied career, and with only half-a-dozen tracks each, is nothing short of astonishing.

This dichotomy also allowed Kanno a tempting opportunity to tell a story for both games, and she seizes it with aplomb. The Nobunaga's Ambition soundtrack, which comprises the first six tracks, flow into one another much like the movements of a suite, effectively weaving a powerful wartime drama with a beginning, middle and end. From the very first brass notes of the brief opening overture, with its reverent trumpet harmonies and the dusky, ominous dissonance coloring its very last, one imagines an unfolding tale of war, strife, heroic deeds, blazing battlefields and hard-fought victories. "Present Day Dreams" begins with a lonely snare and string rhythm marching through a void of yawning, new-age synth pads. With these elements alone, Kanno instantly creates an encompassing atmosphere of staunch determination and tempered sorrow in the face of a coming battle, the rhythm obviously evocative of the march toward an uncertain destiny. The breathy wail of a solo shakuhachi soon enters to carry the melody, dipping and looping above it all like a hawk on a gale of strings and baleful woodwinds. But like a break in the clouds, its oppressive aura gives way as a lovely oboe melody rises up from the tempest and heralds a gloriously uplifting appearance of the Romantic main theme, each strike of the piano ringing clear over the orchestra and affectionate cello underpinning like glittering rays of light. Even at this early stage, Kanno displays a pronounced talent for carrying cues into unexpected places, shifting emotions and tone colors several times within a single piece as if to the manner born.

No sooner does the track end does the album leap straight into "Offense and Defense of the World", a brassy, rhythmically insistent anthem tailor-made to roar above a tumultuous battlefield, or perhaps a neck-and-neck sports game. Unobtrusively mixing live performances with synthesized elements, the omnipresent string ostinati and pounding mixed percussion force the theme ever onward, while the brass blare calls to action one second and spiral out of control the next. As is to mark shifts in tactics and the tide of battle, the leads are passed between sections, the textures thicken, and the tempo keeps accelerating. The music only slows down in its final moments with a series of romantic flourishes and playful xylophone strikes. With one last salvo of polyphony between seemingly every instrument in the mix, it closes on an ambiguous, indecisive note.

The powerhouse "Mt. Hiei Burns", meanwhile, is action from start to finish, a jazzy firestorm of strings and ivory searing over a hotbed of bongo and piano syncopation. At first, it's a truce, the violin and piano circling one another in the same spicy, angular melody. Then, it becomes a duel, Toshihiro Nakanishi's ferocious violin solo shredding through the flying embers with enough virtuosic intensity to light the strings ablaze as Kanno herself pummels away with Impressionist chords and glissandi. Kanno manages the tricky task of allowing both elements to dominate the track without one overpowering the other or having the whole thing be a noisy mess through clever use of dynamics; Nakanishi's violin over the melody, Kanno's piano ruling the backing rhythm and harmony; and their performances are near-perfect. They even tie their clashing harmonies and counterpoints into a final, emotive bridge by the tracks' end. "Mt. Hiei Burns" is easily the centerpiece of the album and among the most creative entries in the entire series.

As the raging tempest of the battle subsides, the monolithic walls of brass comprising the opening notes of "Praise" evoke Strauss' "Also Sprach Zarathustra", creating a momentary pall of unrest as if awaiting word from the final battle, before the rumbling timpani and piano usher in a sumptuous reprise of the theme glimpsed in "Present Day Dreams", here a larger-than-life, triumphant processional for full orchestra. The gallant brass melody, lent proudly patriotic undertones by the snare runs marching at its sides, flows into warmly-hued passages of airy woodwind-accompaniment and drizzling piano, before striding into a powerful, hopeful finish. The final track of the Nobunaga's segment, "Blue Morning", casts off all doubts regarding Kanno's talent for vocalwriting and is easily among the strongest in the series' history. A distant half-lullaby, Kumi Sano's high-pitched vocals and sad, respectful harmonies come down as if echoing over a faraway summit in the dark-blue hours just before dawn. The song is spare and minimalistic, backed only by light synth pads and snares, twinkling water effects, her own whispering chorus, and Kanno's lovely piano accents that always seem to come in at just the right time. Yet it affects an implacable warmth and humanity that belies its cold aura, akin to watching the sun peek over the horizon of what was once a warzone with a loved one, quietly contemplating the toll of war even as the future begins anew.

For Romance of the Three Kingdoms, Kanno takes a slightly different tack and briefly flips the two extremes, elevating the traditional Asian underpinnings of her KOEI work to the forefront with more pronounced use of eastern instruments and song structure. Thanks to the Asian flavoring of Nobunaga, she avoids clashing with the established texture of the album, making the shift feel unexpected but natural even as the music moves from Japanese to Chinese musical styles. The change is immediately noticeable from the keening introductory notes of the xiao flute that introduce the serene "Oath of of the Peach Garden." Kanno wards off the perilous cliches sadly endemic of Chinese-influenced music through a clever interweaving of Chinese and Japanese instrumentation, shakuhachi carrying the lyrical yet somewhat somber melody to bell-like tones, the subtle strumming of the pipa lute and soothing beds of synth, whilst the odd, reedy whine of the sheng shades the song with mystery. The piece melds stunningly evocative imagery with an eerie, lonely anxiety, exemplified by the ghostly bridge segments where the ethnic strings quiver and the shakuhachi moan over and through each other as the bells grow increasingly obsessive and melt away.

"Yellow River ~ Yangtze River" is more relaxing. A gentle shakuhachi and koto theme, it buoys it along a languorous river of orchestral calm, occasionally punctuated by moments of shimmering Oriental beauty. As if noticing that a babbling brook has grown into a vast panoramic river before your very eyes, the theme subtly transforms — again with an achingly beautiful oboe melody and glittering bell percussion — into a gorgeous orchestral evocation of the verdant cliffs and aquatic majesty of the titular river itself. With a slight, pentatonic sheng melody acting as Asian-tinged counterpoint, layers upon layers of lush strings wash over each other in harmony in emulation of the lapping of waves.

Oddly, the rest of Kanno's Romance work sounds far more European classical than most of her earliest Nobunaga work, shifting gears yet again with a pair of stentorian cues for orchestra. The largely-synthesized "An Intersection of Arms" sees a marked improvement in synth quality over the offerings of Nobunaga's Ambition: Tales of the Sengoku Warlords, sounding far less fake and obtrusive. The piece itself is strongly-composed and powerful; a stormy, classically-inspired movement reminiscent of the European masters in its ability to evoke so many different moods and emotions within its near-five minute span. First portent and doom with foreboding horns and restless string ostinati, uncertain respite with a flute melody and Beethoven-esque piano, then dissonance in the woodwinds and martial snares and brass. Whether galloping forward in bursts of heroism or bearing down with crushing brass and sad flute verses, the track is reminiscent of a darker "Offense and Defense of the World" in how it illustrates the chaotic flux of battle.

The final track, "Ancient Times", is a sprawling, Romantic duet that again pairs Kanno's piano with Nakanishi's violin. Reminiscent of Schumann, the cues is characterized by complex figuration, passionate modal harmony and stunning counterpoint. It runs through a gamut of emotions beyond its racing opening that darts back and forth between bowing tragedy and sweet lilting, becoming sprightly and delicate as quickly as it does solemn, discordant and sparse. At points, a harp and even an ondes martinet join in for further effect, including in a resplendently crafted reprise of "Yangtze River." Another wonderful highlight, it contains numerous elements and nods that would later be expanded in Kanno's other works, like "Flutes in the Rain." Similar to "Blue Morning", "When Seasons Change" is a minimalistic vocal track that uses its bare elements to sculpt a cold, otherworldly soundscape with remarkable efficiency. Akino Arai's haunting, breathy register calls out from beyond a wintry bed of harmonic woodwinds and pronounced percussion. Alongside "Ancient Times", it provides the album with a restrained and unconventional but no less lovely finish.

After an impressive, albeit slightly hit-or-miss, first showing with Nobunaga's Ambition: Tales of the Sengoku Warlords, Yoko Kanno summarily proved herself worthy of the challenge of both solo-composition and arrangement duties on Nobunaga's Ambition: National Edition / Romance of the Three Kingdoms with remarkable aplomb. She would still have a long way to go in refining her considerable talents, but to make such an improvement in only four months is astonishing, let alone be capable of so much in such an early stage of her career, in an industry where many of her no-less-talented contemporaries wouldn't work with live orchestra for years. This release displays a remarkable range of emotion, talent and range and marks the first recorded examples of Kanno's venerated creativity and experimentation. Whereas her first Nobunaga was recommendable only as a curio for completionists, this release is an laudable early effort that I can heartily endorse to any and all Kanno fan.

10. "When the Seasons Change"
Vocals by Akino Arai
Lyrics by Chieko Shimotsuki (霜月智恵子) 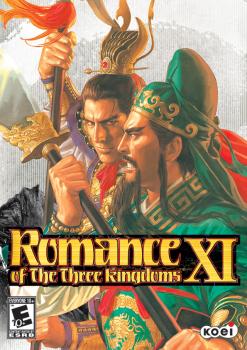