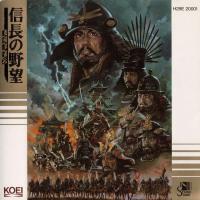 Widely heralded as the "Queen of Anime Music," and for good reason, Yoko Kanno has enraptured fans the world over to this day with her stunning musical range, seemingly limitless creativity, and fond gestures to a wide swath of historical influences. She dances with chameleon's ease across a staggering array of genres, fusions, tone colors, and emotions. Few fans, however, are aware of her no less impressive contributions to the sphere of game music (or her on-record disinterest in writing for the medium), and fewer still that it was where she had her humble beginnings. Even before her very first anime works in 1994 for Please Save My Earth, and inbetween her keyboarding/songwriting gig with the band Tetsu 100%, she was signed onto KOEI's sound team to compose for a succession of historical titles. One of these was 1989's Nobunaga's Ambition: Tales of the Sengoku Warlords (aka Nobunaga's Ambition: Sengoku Gunyuuden), an instalment in the company's popular strategy RPG series. She was commissioned to arrange her 8-bit works with richer samples and real instrumentals, with what would be the first of many arrange albums for the company.

In time, the Nobunaga's Ambition series would be heavily characterized by a dramatic, noble texture of sumptuous classical orchestral and restrained brushstrokes of traditional Asian influences for added color. In time. Even queens have to work their way to the throne, and Kanno's first arrangement efforts in the eyes of many is an occasionally enjoyable curiosity that nonetheless stumbles with the wobbly, uncertain steps of a future prodigy still trying to refine her own voice. The orchestral pieces are captivating and impressive early efforts that hold up even now. Yet the fierce ambition, inventive harmonies, reinventive derivations, and rich thematic development characteristic of her later oeuvre are conspicuously absent. The vocal themes in particular — an area in which she would come to excel — are the weakest in her career.

Unlike Nobunaga albums to come, this first effort is almost entirely vocal in nature, and largely synthesized to boot, a far cry from the dignified orchestral flair that would define the series as it came into its own. Only four of the tracks of this already brief album are wholly instrumental, and of them, only three were composed by Kanno. But even at this early, unrefined stage of her career, she displays remarkable command of the tools afforded by the orchestra and a sophisticated restraint in melody — choosing vivid, classically heroic themes over the full-force bombast and cliché that tempts so many when first handed the keys to the symphony.

The disc opens with a fierce swell of synth strings, keening woodwinds and deep martial percussion. The melody isn't particularly strong, but there's a novel interplay between instruments as the bassoon, clarinet, and flute pass along the role of leading instrument as they blaze a trail for the vigilant string and brass counter melodies and polyrhythms filling out the arrangement. "The Rival's Vigor" spins a venerable ode to the turbulent struggles of wartime, a lyrical string legato colored with grim redolence before galloping brass launch the music upward into a sprightly gale of circular piano trills and affectionate strings. A fleeting glimpse of Wagnerian glory gives out and wheels down to earth like eagles mid-dance to come to rest and be lifted gently upward aloft a sweetly romantic trombone ballad, before the march of history, and the melody, repeats itself. The dramatic "Fangs of a Bitter Wolf" roils the strings into a looming storm of macabre portent and lightning strikes of brass counterpoint. Though lacking the sheer ambition and refinement of Kanno's later works for the orchestra, her instrumentation is vivid and full, crafting unique textural colors and emotions with tasteful restraint uncommon in video game scores.

The rest of the album comprises largely simple, '80's pop-flavored ballads of varying quality. Kanno's "To Distant Friends" makes the largest effort to bridge the gap between the two extremes. At the heart of the piece are Akira Shibusawa's elegant, if simple, vocals above bare, plucked synth arpeggios. , Kanno colors the spaces between with a delicate, Impressionistic tone poem, calmly restating the melody, darkening with oppressive piano hammering and stormy trills and then receeding back into lighter tones as the angelic lyrics return amidst drizzling piano. This, and "Search for Time" — a lonely aria for harpsichord and synthesized string section with the fragile buoyancy of Akino Arai's haunting voice — represent the finest vocal tracks on offer. The next two, however, make decidedly less impressive showpieces for the respective singer's capabilities. "Soon..." is bog-standard, 80's easy-listening pablum in desperate need of a pulse. Kanno's last piece, "Ancient Eyes," disappoints with overly basic percussion and an elementary melody that fails to make the most of Arai's distinctive voice. It makes some game attempts to mix things up with an exotic percussion bridge and flute solo, but they're too little consolation and too weakly developed to elevate the track above mediocrity. Both pieces are rare, early misses from one of the most venerated composers in the field.

Which brings us to the other one. Another little-known fact regarding Kanno's first soundtrack work is that was actually a co-compostion effort, together with fellow KOEI alumni Mitsuo Yamamoto, and it would not be the last time the two came together. I'm not terribly familiar with her work, and her two offerings here do little to inspire me to become more so. Her melodies are effective enough, but are far less distinguished or developed. "By Your Side," her sole vocal contribution, is palpably 80's through and through: simple synthesized beats, cheesy background chorus, barely there drum kit, and a melody from Arai that drips with sap. It's not terribly offensive in any particular fashion, just... bleh. It'll go through one ear and evaporate before it reaches the other.

Curiously, Yamamoto winds up writing easily the longest instrumental in the series' history with "The Clouds of War", though this is by sheer virtue of being a rather simple, twelve minute medley of four themes rather than a true, rich orchestral suite. It opens with percolating ethnic percussion and an energetic, if unspectacular synth melody. After droning through rote militarisms and snare runs, the theme blossoms with some unexpectedly soothing synth pads as a shy violin melody whispers over an overly loud mix of tinkling bells and pealing bass. A short, sentimental piano solo closes out the medley and gently expands outward with a drumbeat and lo-fi strings into a corny but uplifting finish. The transitions are less than fluid and the blatant synthesizers make the track stick out against the rest of the albums' unpolished but convincing orchestral texture like a flamingo among penguins, but there are glimpse of potential here and there that could have been refined into works of art with more time and talent.

Nobunaga's Ambition: Tales of the Sengoku Warlords offers an intriguing window into a celebrated composer's humble beginnings, not only in a medium she rarely returns to, but within her career in general. Yoko Kanno's orchestral cues are few in number but leave an indelible impression with their lush melodies, harmonies and development. The vocals, while mostly weak, herald the start of what would become a fruitful partnership between Kanno and vocalist Akino Arai and an abiding love for vocal writing in general. The thematic development and creativity of her later years are still ahead of her, for now. But for what it is, the album is an interesting, if not essential, addition to any fan's collection.