After listening to the Infinite Space soundtrack, the first thought that came to mind was, "Man, there are no words to explain how bad that was". Then I realized that I needed to come up with the words to explain how bad the soundtrack actually is. Welcome to my conundrum. So let me tell you how I feel about this whole situation: I am equally confused and disappointed. To put it shortly, the Infinite Space soundtrack is without any merit whatsoever.

Featuring a team of composers led by Masafumi Takada, the man behind some of my favorite semi-recent soundtracks such as killer7 and No More Heroes, this album is not what I expected at all. It's like when you order something from overseas and you're expecting your mailman to deliver you a fancy new soundtrack that you've been waiting months and months for, and when that doorbell rings you run to answer it and collect your prize but instead you find a flaming bag of dookie on your front porch. That's pretty much exactly it, actually. What I expected was an album that would be at the very least a passable and relatively harmless album, like Takada's previous The Silver CDs, and at the most a really good DS soundtrack, but Infinite Space is a total sham. I want my money back so I can do something more productive with it, like throw it into a raging bonfire. Burn, baby, burn!

So, first things first: the sound quality of the soundtrack is terrible. Somehow, Game Boy Advance soundtracks released several years ago, such as Metroid Fusion and Final Fantasy Tactics Advance, sound worlds better than the DS sound on these two discs; the music is tinny, fuzzy and difficult to take in for long periods of time. It's a shame that the actual sound of the music is of such poor quality, but I haven't even mentioned the compositions yet.

If you have heard any of Takada's other work and have enjoyed what you have heard, you will not care for Infinite Space in the least. The other composers that are featured on the disc, none of which you've heard of before I can assure you, are most likely the chief culprits behind this leviathan-sized disappointment. Takada is no longer employed by Grasshopper Manufacture and is now working for a company called Sound Prestige, and GHM has appointed four other dudes to their sound team in his stead who can't even light a match in Takada's presence, never mind hold a candle to him.

The album is comprised of two discs full of overwhelmingly generic militaristic marches with plenty of with oppressive battle themes and choral-led orchestral bombast that's as empty and unfulfilling as it is loud and unpleasant. The album finds its only saving grace in the quiet themes that are interspersed through the soundtrack, and even those are easily skippable and unmemorable, especially when appropriately placed in the towering shadows of Tadaka's previous works.

The first six tracks, from "Warspace" to "The Great Pirate Valentine", are barely distinguishable from one another, even after a few listens. Unless, of course, you like loud scratchy pre-GBA synth and scattered militaristic compositions; in that case, you are in luck! Only when the underwhelming "The Universe in Despair" kicks in does the album give you a breather; enjoy it while you can. Some other quiet themes like "Calm" and "Pub" that are scattered around the discs are the aural equivalent of asprin compared to the rest of the junk on the soundtrack, and "Chelsea", despite being very basic, is quite enjoyable. But don't get too used to it, because after two minutes you're thrown right back into the frontline with the orchestral hits and cheery faux-trumpet refrain of "Setting Off". I could go on, but I would just be repeating myself. Most of this music sounds very similar and is equally overbearing and unenjoyable, and I'd hate for my writing to follow suit.

At the end of the disc, there are two "bonus" themes (and I use that term lightly): "Infinite space" and "Infinity Route". The former is a ten minute long medley by Masamichi Amano featuring some reprises of melodies from the soundtrack that you probably skipped over the first time through, so there's a good chance you won't even recognize them. The track is performed with updated synth instruments and sounds live, but that doesn't mean it's worth ten minutes of your life because the recording quality of the music is good. The album's final track, "Infinity Route", is the most Takada-sounding track on the whole album, but even this song is ruined by something, of course; in this case it's lackluster vocals and the integration of the DS synth, both of which are baffling as to why they were included in the first place. Another one of mankind's mysteries that will most likely go unanswered.

With all due respect I want to apologize for being so brief, but Infinite Space does not warrant any more of my time, nor does it deserve any of yours. If you want to hear what Masafumi Takada really sounds like, check out any of his other albums — preferably killer7 or No More Heroes — and enjoy some amazing music. But this? This soundtrack should have been cancelled long before its release. That extra score point is a pity point. I'll put my money down that the compositions were mainly contributed by Takada's collaborators, but regardless of who's guilty the whole package is extremely disappointing. Takada, I know you can do much, much better than this.

Album was composed by Масафуми Такада and was released on July 23, 2009. Soundtrack consists of tracks with duration over . Album was released by Geneon. 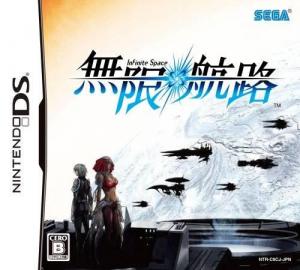