Quantum of Solace - Original Soundtrack From The Video Game 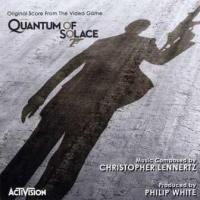 Having taken over the James Bond license from Electronic Arts, Activision released James Bond 007: Quantum of Solace across multiple platforms to great commercial successful in 2009. The game actually recounted the storylines of both of Daniel Craig's Bond films, Casino Royale and Quantum of Solace, within intense first-person shooter gameplay courtesy of Activision's developers. Having impressed with his score for James Bond 007: From Russia to Love, Christopher Lennertz returned for this title to offer a cutting-edge score recording with orchestral performers.

The soundtrack for James Bond 007: Quantum of Solace revolves around two major themes. One is the film series' iconic main theme, which opens the soundtrack in a straight rendition and receives many arrangements thereafter. In contrast to the likes of Tomorrow Never Dies and Nightfire, most of the theme's references are subtle and meaningful ones within already established piecces. For example, its appearances during the most heroic segments of the otherwise tense action cue "Skyfleet" or at key moments during the romantic orchestration "Toward Montenegro" is crucial for depicting Craig's Bond during the game.

Learning from the mistakes of past series' composers, Lennertz also created an original theme for the title to uniquely define the title. Exposed in the "Main Menu" theme, Lennertz presents the theme on a solo flute that evokes memories of Vesper with its pensive yet sorrowful nature. Nevertheless, the composer still asserts the series' distinctive sound with suave yet dangerous textures and even a chromatic chord progression. The melody pops up throughout the score, bringing a much-needed original hook for the title. Certainly its most emotional rendition is on "Bergenz Floating Opera", featuring a tragic soprano in conjunction with hypnotic minimalistic orchestration.

Moving on to the action material, "Science Center Fight" seems to have been written in the spirit of David Arnold with its blends of snazzy horn performances and modern Hollywood action scoring. While somewhat stereotypical, it's a remarkably well-produced and serves the scene brilliantly. "Night Train Fight" and "Elevator Plunge" further develop this sound, but never at the loss of exuberance or creativity. "Madagascar Sprint" provides some contrast to the score with its presentation of the Bond theme in conjunction with African polyrhythms. It's not up there with David Arnold's more expansive and polished "African Rundown", but still works well in and out of the game.

An original vocal theme was also created for the title, "When Nobody Loves You". The best part of the song is the verse section, featuring haunting and alluring lyrics by Estonian artist Kerli, against a gritty rock-orchestral accompaniment. Less impressive is the chorus section, which many will find too upbeat and poppy given the content of the lyrics. It's also dubious that the writers broke series' tradition by incorporating the Bond theme itself into intros and bridges of the song. While it's worth checking the game's official music video, note that this track is not included in the promotional soundtrack and isn't included in any of Kerli's studio releases to date.

Overall, the James Bond 007: Quantum of Solace score is a fine complement to David Arnold's film scores. Christopher Lennertz proves his expertise throughout the atmospheric and action material on the score, offering rich orchestrations and artistic subtleties that go beyond the call of duty. The soundtrack was only available as a limited edition bonus for those who purchased 100 USD or more at Buy Soundtrax, so is hard to come across now.

Sounds like Classical, Instrumental, Score - that's what we can say about this album.