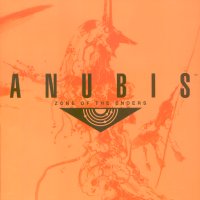 Zone of the Enders: The 2nd Runner is the critically acclaimed sequel in Hideo Kojima's ultramodern mech franchise. Original game composers Maki Kirioka, Akihiro Honda, Toshiyuki Kakuta, and Norihiko Hibino returned to expand upon the music for the title. Like its predecessor, much of the score focuses on electronic genres to capture the futuristic and mechanical feel of the game. However, it also features a lot of diversity and displays influences from world, orchestral, operatic, and jazz music as well. As a result, the team both create a coherent and distinctive in-game accompaniment while ensuring individual compositions are often interesting too. The album release features 22 tracks and was available in import and domestic versions. Is it worth picking up?

Maki Kirioka's main theme for Zone of the Enders: The 2nd Runner, "Beyond the Bounds," is one of Konami's finest vocal themes. Following a moody cinematic introduction, the song moves into the upbeat verse. The beautiful timbre created by the blend of exotic vocals, soaring strings, and futuristic beats ensures a colourful introduction to the mech world. However, the chorus is relatively serene — featuring the unforgettable main melody of the sung in English by a reasonable vocalist. The song maintains interest throughout its six minute playtime with novel sections dedicated to evocative violin solos or electronic experimentation. The main melody also makes powerful appearances in several of Kirioka's instrumental tracks, notably in the most motivating section of "Air Fight" and more subtly in the technofest "Compression Space". However, the most abstract version is Mitsuto Suzuki's post-production mix in the middle of the soundtrack. He transforms the song with electronically distorted vocals, meditative electronic overtones, and some harder techno beats. It won't be for everyone, but is quite well done.

Much of the soundtrack focuses on adding atmosphere and dynamism to the game's scenarios through electronic soundscaping. Though a multi-composer score, the composers complement each other to create a consistently fitting accompaniment to the game while precisely depicting specific settings or battles too. Bemani composer Toshiyuki Kakuta (aka L.E.D.) probably creates the finest electronic pieces on the soundtrack. "Seek Taper" and "VR Training" are beautifully mixed industrial tracks. Though intrinsically simple and rather short, they both create so much atmosphere with their gentle layering of percussion and synth pads. He reuses many of the features "VR Training" in "Bahram Battleship", but this time makes the composition much richer in both development and timbre. His electronica here channels influences from the psychadelic trance genre and mixes it with dabs of operatic and drum 'n bass. The entire composition seems perfect for representing the infiltration of an advanced ship. "Descending Aumaan" is a major highlight too and demonstrates Kakuta's flair for creating soothing yet stimulating timbres.

Akihiro Honda's contributions tend to be based on repeating and layering diverse forces to create interesting rhythms and timbres. "Jehuty - Vivid Transparency", for instance, blends futuristic electronic beats and solemn strings before taking things up a notch with harder rhythms and spacey distortions. The development section of the composition from 2:10 is most interesting — forces dissipate to give an eerie atmosphere before gradually building back up into a heavenly climax. Unfortunately, it becomes obvious in other tracks that Honda has a tendency to use forces in a divergent way without really considering the big picture. "Leo! Leo!" and "Aloivia" feature great use of dramatic chanting and penetrating beats, but the forces don't correspond well with each other and create an even more surreal sound than intended. In contrast, "Ardjet" and "Train" create wholesome soundscapes, but practically every force is used in a clichéd and predictable way. Though atmospheric in context, Honda's naive use of instrumentation prevents them from being as interesting as they could have been on a stand-alone basis.

The climax of the album is impressive nonetheless. Norihiko Hibino's "Explosion & Aftermath" intensifies the album by focusing on building martial brass and percussion rhythm; this predominantly orchestral event theme takes many twists and turns during its development and is definitely one of the compositional marvels. Honda's "Chaotic Fight" captures the threatening and enduring nature of battle with rasping brass and hard percussion; however, it again suffers somewhat on a stand-alone basis from its melodramatic chord switches, operatic overtones, and tremolo strings. Kakuta compensates with a sublime trance track, "Zakat," that uplifts gamers prior to the final battle. For the final encounter, Hibino offers a fascinating blend of epic orchestral elements with thick beats, dabs of moody jazz, and even some operatic instrumentation. It's an excellent example of a multifaceted composition that also forms a coherent whole. The score is rounded off by two orchestral ending themes also composed by Hibino. "Jehuty Returns" becomes much more elaborate and bold over its playtime, but feels personal throughout, while "Trusting Peace" is an elegant reprise of the main theme for orchestra and piano.

The Zone of the Enders: The 2nd Runner soundtrack features many highlights. They range from Maki Kirioka's exotic main theme to Toshiyuki Kakuta's sublime electronic mood-setters to Norihiko Hibino's expansive orchestral compositions at the climax. Nonetheless, the score is an impressive collective effort too, working seamlessly within the game and on a stand-alone basis. There are a few tracks on the album, principally from Akihiro Honda, that could have been more interesting on a stand-alone level and suffer from their musical naivities; however, they're still enjoyable enough and work admirably in the game. Overall, the score develops the well-established musical style of its predecessor while adding plenty of diversity too. There is more than enough on this album for it to warrant a purchase for fans of the mature electronic style adopted.

Album was composed by Акихиро Хонда / Maki Kirioka / Норихико Хибино / Toshiyuki Kakuta and was released on March 19, 2003. Soundtrack consists of tracks with duration over more than hour. Album was released by Konami Music Entertainment.