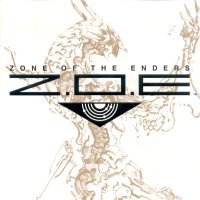 Z.O.E. (Zone of the Enders) is a techno-based bonanza, which is enveloped in lush string arrangements and standout vocal tracks, and peppered with heartfelt piano pieces to make it standout as a classic soundtrack that could appeal to most listeners' senses.

"Title (The Origin)" starts off the album in an ethereal vocal piece that sets the mystical and tense scene for "Introduction", an ambient piece. The album builds up to "Leo Stenbuck (Break Out)", which glides effortlessly between ambient and techno ambient as the build up continues to produce a nice string piece at the end before finally the soundtrack's legs are let loose at full speed after a long build up. "Factory (Vivid Transparency)" is a synth-infested early 1990's rave / techno hybrid that's easy on the ears but great to stomp along to. It leads, as many of the tracks do, effortlessly into "VR (The Forth Dimension)", which is a faster paced techno piece that's full to the brim with grizzly sounds.

"Flowing Destiny (Piano Arrange)" takes the soundtrack to new uncharted areas as a beautifully pristine piano piece that's understated and heartfelt. "Global 1 (Forever And Ever)" is more melodic than most of the beat-infused songs, with soaring electronic arpeggios fading in and out. After, the album slows down again for "Are You Alright, Celvice?" which encases each aspect of the album in one piece. "Boss (Neves)" gets the pace flowing again with more balanced hardcore beats layered with high pitched vocal lines and hard panned bass lines making for a panic fused song that will raise your blood pressure somewhat! "Celvice! This Way Quickly!" is a short and elegant piece lead by strings and piano with a slow beat that makes it unique in the album.

"Resident Block (SO2)" is a piece lead by a very muffled and quiet drumbeat showing underlying tension, while various sound effects and white noiz take the lead intertwining with a synth-guitar. "A Light With A Name Of Hope (Piano Arrange)" is short but since the main tune doesn't really jump out on you, it does seem rather lost and easily forgettable. "Radar (Pandemonium)" returns to the SFX smothered techno / rave hybrid with some nice extra drum effects to make this track fluster you. This can also be said for "Global 2 (Virus)," which has some nice rolling wooden percussion throughout. "City (The Earth Light)" continues to edge the soundtrack towards the rave end of the electronic music scale with a piece like something you'd expect The Prodigy to release.

The soundtrack finds its ambient roots again with "Mountain (Who Can Read The Future?)", a piece of two halves, one ambient and one very much full of discord and drama. "Rock Thunderheart (Function)" is a dramatic piece like a showdown. "A Light With The Name Of Hope" takes you on piano/violin piece that's a beautiful bittersweet collaboration of a great tune that you'll hear in different guises throughout the album. "You Need This Done To You" is a tension-building piece that comes across like a space oddity before dying before your very own eyes. "Flowing Destiny" is a continuation of the song that leads it into peace and tranquillity making you smile. "Ada (Promise)" is a piano piece that takes its time to tread its path, and sounds all the better for doing so in a downbeat performance. "Flowing Destiny (Memories)" is a full piano/violin rendition that is more heartfelt than the previous versions that have been sprinkled throughout the album so far.

"Neith (Risky)" screams danger and battle from the start as we hit the final boss themes. The intricate little details and drum rolls make this an exciting track, but it doesn't sound full enough to be a real boss track, despite all its dramatics. "Viola (Silent Death)" is another piano theme that is made ten times better by its dramatic pauses and lack of rush to get anywhere; this makes it much more heartfelt and saddening as it reaches its low key crescendo. "Anubis (Impossible)" has the opening theme of the album running throughout and, instead of focusing on being intense, focuses on being giant in scale and overpowering. The piece is very refreshing for an end boss track and is unique again from the rest of the album.

"Juhuty Will Self-Destruct?" is an orchestral piece that highlights the fact this soundtrack can do anything, and do it above par with this bitter and subtle end. However, Z.O.E. saves the best until last, with three superb vocal songs to treat us to. Each one stands on their own two feet and are among the elite in the VGM ending songs. "Flowing Destiny - Ending Theme 1" is a perfect orchestral and vocal song with a nice pop beat helping it along the way. "Kiss Me Sunlights - Opening Theme" is an original song that borders the dance genre, but is bittersweet (like much of the album's set pieces) with a hint of sadness in an otherwise very lively song. "A Light with A Name Of Hope -Ending Theme 2 / Celvice's Theme" closes the album on a quiet note with a sensitive song and a beautiful voice.

Z.O.E. is a soundtrack that does everything and does it with panache. If you have a soft spot for dance / rave / techno music, I suggest you pick up a copy immediately. The rest of us, however, should only look at the other standout pieces and, if you love those, the rest of the album quickly grows on you around those pieces. A very pleasant surprise!

The score for Z.O.E. Zone of the Enders (Z.O.E. for short — I'll be referring to it as this throughout the review) is a very interesting mix of techno, dance, and electronic genres, with a little bit of pop and rock mixed in. Several games use an electronica score to try and match or enhance the mood of the game. However, few pull it off with such ease as Z.O.E. Each track blends seamlessly into the score as a whole, and every track keeps its own unique identity, while staying within a coherent theme. There are no tracks which hideously stand out as being different, but there is enough variation to keep it interesting. In this review, I'm going to be looking at some of the tracks which I believe represent some of the most fun, melodic, and interesting pieces of the album.

Let's start on a strong note (quite literally). "Factory (Vivid Transparency)" begins with a very interesting, yet sharp electronic shot and roll. The main dance beat of the track is extremely appropriate, and it sounds great because it isn't overpowering. The beat drives the track, while the sweeps pull the track back and forth. The sections of the track where the beat drops away are incredibly unique in that they make seamless transitions from techno-beat to orchestral-melody. That's the other great thing about this track — it's catchy, and yet it has very little melody, which is somewhat rare to see done well. Along similar lines, "Boss (Neves)" does a really cool job at combining a low, dance beat with other synthesizer sounds, while including a haunting operatic vocal line. In many ways this track goes against what I traditionally like in a game track, in that there's too much repetition, however the vocal sweeps really create something special in combination with that repetition. At the same time, it also serves its purpose as a boss theme quite well. "You Need This Done to You" is another track which uses vocals to emphasize certain portions of the track, which create a more orchestral sound. The short piano segment also adds a creative break into the sweeping choral vocals and subtle bass line.

A lot can be defined about a game based on the ingenuity, and the musicality of its worldly themes. Z.O.E. features two world themes, both of which present a different approach for how to represent 'the world' of an RPG. "Global 1 (Forever and Ever)" is a bit slower, and focuses more on waterfall synth effects, supported by a heavy bass line and light percussion. But altogether, the track doesn't capture your attention, and in more ways than one, attempts to get you off the world map as fast as possible. "Global 2 (Virus)" however, presents a very catchy, bongo-driven traveling theme. The bongo line in particular stands out in this track, because of its seamless integration with the otherwise exclusive synth instrumentation, but it pulls through and really gives the track its edge.

Taking a step away from beats lets look at "Viola (Silent Death)." This track begins with a piano solo, before moving into a more orchestrated arrangement, which is a fantastic contrast to the otherwise synth-driven score. I know I mentioned how no tracks really stand out as being different, and although this track is certainly different (and obviously not hideous), the statement still holds true. This track simply represents the light, melodic phrases we hear throughout the album, scattered behind all of the electronic beats and sounds. "Jehuty Will Self-Destruct" does an amazing job at supporting the softer side of the album, by bringing a large orchestral orchestration to round out the album.

From here, it's only logical to look at how these two extreme opposites come together on the album when merged into the vocal pieces. "Title (Origin)" is probably one of the most haunting pieces I've ever heard. The vocal key and note choices are random, yet structured, and the echo compliments the sharp, yet smooth solo vocal performance. "Kiss Me Sunlights -Opening Theme-" is the first meld of instrumental vocal and techno beat that is heard in the game, but it isn't horribly strong. The dance beat is predictable, and the vocals sound a bit weak. The track as a whole lacks any real glamour or shine that is needed to pull the player into the game world.

From here, we see two distinct themes emerge several times throughout the album, both in vocal and instrumental form. The first is the 'Flowing Destiny' theme. The theme is first presented as a whole in "Flowing Destiny (Piano Arrangement)," which isn't necessarily the most complex piano theme ever heard, but it's still pretty. "Flowing Destiny (Memories)" does a better job at representing the theme, through the duet of piano and violin, and later cello. Again, the melody is simple and the result is pretty, but having the melodic line through the strings provides a better opportunity for the piano to deliver an acceptable accompaniment. "Flowing Destiny (Resolution)" brings vocals to the melody, foreshadowing the ending vocal theme "Flowing Destiny -Ending Theme." This was the first song I had ever heard from this game, and for some reason it struck me. The track is distinctly pop, and altogether isn't particularly impressive or innovative, yet the track as a whole still has that certain appeal. It's one of those tracks that you either love, hate, or choose to disregard.

As I said at the beginning, this track is a strong expression of techno music in a video game score. The tracks which shine on this album are indeed the beat oriented electronica tracks. But many of the vocal pieces and the melodic segments fall short of their true potential, which is a shame. Altogether though, the album is strong and fun to listen to if you enjoy a little techno now and then. But if you're allergic to dance beats, then my advice is to stay far, far away.