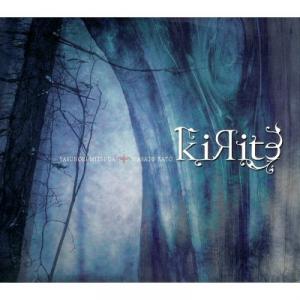 Yasunori Mitsuda is no stranger to Celtic-influenced music with Eastern undertones. With KiRite, an album of music to accompany a 52 page story by Masato Kato (which is provided but is in Japanese), Mitsuda once again delves into what he does and knows best.

"Is KiRite Burning Up?" opens the album with an acoustic guitar gently playing to the vocal delights of Eri Kawai. After the beautiful introduction, we are treated to a military-paced Celtic charge led by an electric guitar with echoing vocals. It all reminds me of how I pictured the Chrono Trigger arranged album should have been had it not tried to straddle ten genres all at once. An excellent opener and all the instruments are live. "The Market in Volfinor" passes Celtic by at the start for a more middle-Eastern feel to open with. A whistling intro gives way to beautiful percussive bells and more acoustic guitar chords. Once the drums and violin break out, however, it reminds me of a typical village theme to a game. However, instead of using loops, because the instrumentation is live the themes can move and flow freely like water and not just do two repetitions and end. This piece never sits still and is an amazing piece of composing.

"Promise with Winds ~ Petals' Whereabouts" sounds like a downtempo rock ballad. Eri Kawai's vocals shine on this track as she sings with little reverb to distort her unlike the first track. It's a difficult song to pull off because of the various chord changes in the chorus but the end result is a very pleasing one. "The Forest of Lapis Lazuli" uses one of my favourite instruments, a hammered dulcimer, to lay the background tune out with a guitar while the violins and tin whistles carefully soar the main tune out for everyone. This piece could have came straight from Final Fantasy Crystal Chronicles for its use of more ancient instruments. Similarly, it also reminds of the style Mitsuda adopted for Haka no Niwa. "The Azure" is another vocal song, but this time it is a Celtic-influenced uptempo folk piece. The chorus is particularly catchy.

"Scorning Blade" for the first time takes a darker route in music. Using various ambient percussion and very low tone monk style hummings for the first half, it suddenly transforms into a solomn piano piece which aches the heart. A song of two halves and quite unusual at that. "Upon the Melodies of the Moon" is an a capella version of the main theme heard in several songs. Beautifully presented. "Fated Encounter ~ The Fall of Darkness" now reminds me of the Shadow Hearts arranged album (although Kirite came out first) because of the way how the guitar pounds out riff after riff with vocal moanings and piercing bagpipes all competing for your attention. Previously it reminded me completely of a band called "Secret Garden" and it still does to this day. Another excellent piece again.

"Nocturne" is a beautiful piano and violin piece which gives warmth before "As Autumn Passes Away" ups the pace with an uptempo number with a slightly mysterious but compelling twist to it. "The Snow Howling" is a strange piece — the main violin is very much in the foreground of the speakers but everything seems to be very much distanced and almost in slow motion. Once the drums join the violin, it makes more sense giving the effect of a tough stamina reducing journey. "Prayer Tree" is a piano- and acoustic guitar-led piece with various other instruments making up the percussive line. "The Name of Our Hope" provides the final vocal song. Choosing another upbeat song (I assume the story has a happy ending!), Eri Kowai once again shows her strong vocal talent to what is a full band version of the piano piece from "Scorning Blade". It sounds completely different but you can still hear the link which is great. "Circle of Infinity" is a short piano reprise of the previous track to end a stunning album.

This whole soundtrack is classic Mitsuda. There is not one poor track on this collection and it has quickly become one of my favourite soundtracks. I liken it in style and music composition to Legaia Duel Saga in the way the songs are written and the instruments used. If you enjoyed that soundtrack, think of an arrangement of that with real instruments and you're some way to describing KiRite. A superb classic and a must buy for all music fans.

Collaborating with Masato Kato to compose music to accompany a story he had written, Mitsuda brings yet another masterpiece to his resume. As some of you may know, Kato was the mastermind behind Chrono Cross and the style of music Mitsuda chooses to compose is very reminiscent of the soundtrack to this game and similar to his Xenogears arranged album Creid.

"Is KiRite Burning Up?" starts out with a slow acoustic guitar solo and is soon accompanied by poignant vocals. As the track progresses, it takes an extreme shift in tempo. Percussion, piano, violin, electric guitar, and shakuhachi all take the stage and create a rhythm that makes you wonder if KiRite really is burning up! The electric guitar and shakuhachi are the basis for the melody while the violin creates a bass line that stays refreshing throughout the piece. The same poignant vocals enter the piece again and create a sort of lulling melody before the tempo speeds up again and climaxes with the electric guitar and shakuhachi. For an opening track, this really grabs your attention and doesn't let go. It's a very vivid introduction to the album and the book it accompanies.

"The Market in Volfinor" sets an atmosphere of hustle and bustle, something expected of a marketplace. The melody itself is very playful, which lends itself to help enforce the atmosphere at the marketplace. The melody played by the flute is deeply evocative and thee postlude in the piece invokes the beginning xylophone bass line, brigning about the idea of the market closing. Another setting piece, "The Forest of Lapis Lazuli" invokes a feeling of serenity with its exchanging solos on violin and flute, though features occasional shits in intensity. It really gets the listener immersed in a forest full of precious gems. Other highlights include "As Autumn Passes Away", a folksy composition that creates an image of falling leaves in a local village while a harvest festival is being celebrated. "The Snow Howling" meanwhile blooms from its ambient opening towards its traditional centre, inspiring pictures of a light snow falling over a small Japanese hut with a fireplace in full effect in order to keep the occupants warm during the cold and harsh winter.

"Scorning Blade" is quite haunting. A piano and acoustic guitar plays a simple bass line melody while an almost Gregorian chant accompanies it. Soon the piano itself takes the role of the melody producer and shines through the use of the acoustic guitar. Halfway through the track, Mitsuda pulls a 180 on us and eliminates the use of all instruments except for the piano. It's a haunting melody that showcases the main theme of the album "Circle of Eternity." Later in the album, "Fated Encounter ~ The Fall of Darkness" starts off quite strong. The acoustic guitar creates a nice bass line, while the supporting vocals add a layer of sophistication to this entire piece. The woodwinds and strings in the piece create a beautiful harmony that carries the main melody throughout the song. When all the different types of instruments are intertwined, a feeling of awe and accomplishment overcome the listener. The most striking aspect of this entire song is the transition between fast and slow. At times the vocals add a haunting texture to the song, while at times they are used as a melody strengthener.

"Promise with Winds ~ Petal's Whereabouts" is the first vocal theme of the album. It's a very mellow piece that accompanies the vocals with acoustic guitar, percussion, and piano. All three sections mesh quite well together with the singer Eri Kawai. The vocals themselves are quite strong and, while not as poignant as in "Is KiRite Burning Up," sincerity is felt as the words emanate from the singer's mouth and lingers into the listener's ear. To finish up the track, a small solo by an electric guitar is not overbearing and seems to find its place in finishing up the melody. The second vocal piece of the album, "The Azure", has an introduction more reminiscent of his Creid vocal songs. The singer, Eri Kawai, once again shines in this piece. Her voice seems to accompany the percussion and the acoustic guitar so well. The violin that plays the melody while the singer is absent is strikingly beautiful and only helps to create a beautiful harmony. Compared to the first song of the soundtrack, this one shows a higher level of maturity.

When it comes to very organic sounding compositions, Mitsuda's a cappella pieces really strike the heart of the listener. There is an intrinsic beauty to the composition of "Upon Melodies of the Moon". This beauty comes the emotion displayed by Eri Kawai's voice. By layering her vocals to create a strong melodic vocal line and a subtle accompanying vocal line, Mitsuda is able to craft a piece that makes you feel warm inside. The last vocal piece on this album, "The Name of Our Hope", is Eri Kawai's strongest performance on the album. Before I get to the vocals, let's describe the actual instrumentation. The piano is used to create a wonderful melody while the acoustic guitar only lends its strength to boost the piano's usage. Kawai's voice in this song can only be described as 'indescribable'. It's so powerful that this song would be fantastic a cappella. When combined with the effect piano/guitar accompaniment, her vocal strength is only heightened.

"Nocturne" is my favorite piece on the entire soundtrack. Reminiscent it is comprised of mainly piano and violin to create an extremely sad atmosphere. The piano and violin mesh so well that it sounds like Yuki Kajiura may have lended a hand with this track. While the piano itself creates the accompaniment to the violin, it plays beautiful passages that could stand up on their own.That being said, the violin is really the star of the show. It creates the often sad atmosphere associated with a slow ballad, yet also is strong enough to create a series of melodic tangents in the latter half of the song. Moving to the closure, the brief "Prayer Tree" creates a sense of tranquility using percussion and piano. he electric guitar which plays the main melody is a subtle addition to the piece while the addition of female vocals creates a sense of holiness. Finally, "Circle of Eternity" reprises the melody of the latter half of "Scorning Blade" in a simple yet effective way. It's easy to listen to this piece as time passes without a care in the world.

Coming out after Moonlit Shadow, in which Mitsuda also played a part, KiRite had big shoes to fill. In this album, he succeeds in creating one of the best albums he's ever composed. While his standard fare of Celtic inspired music may draw some listeners away, I assure you, this is not quite the same as his others. In fact, I think he's learned to harness the power of the Celtic music, in a way that shows his maturity as a composer and that any other Celtic influenced albums in the future will garner a bit more maturity and stylistic writing. For an album created for a book project, Mitsuda succeeds in immersing the listener into the world created by Kato. A definite must for all Mitsuda fans in the world.

По материалам animenewsnetwork.com....
Показать
08.08.2008    1922
Album was composed by Ясунори Мицуда and was released on May 18, 2005. Soundtrack consists of tracks with duration over about 50 minutes. Album was released by Sleigh Bells.