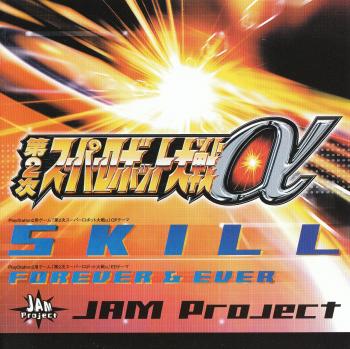 After being left cripplingly short in game animation and soundtrack release, in what has become a recurring trend for the series, it's delightful that the opening song "Skill" is given a chance to really expand on this single. The most enjoyable feature here are the 'call and response' vocal passages between the female and male vocalists, who both really bounce off each. The rock accompaniment verges on melodramatic, but this is arguably part of the charm and it certainly adds to the anison spirit.

The ending theme "Forever & Ever" is also greatly elaborated upon here. Once again, there is creative use of both the male and female vocalists here, but in a rather different way. Whereas some parts of the song resemble a romantic duet, others are closer to a rock anthem. Unfortunately, the song comes across as a bit disjointed overall despite its touching moments, though gradually becomes more unified during the latter half.

Overall, the theme songs for 2nd Super Robot Taisen Alpha are enjoyable, but they're really not up to the superlative quality of their direct predecessor. Instead of heading for this single, dedicated fans of JAM Project should consider the Super Robot Taisen JAM Project Theme Song Collection instead, since it features these full-length songs and 12 others from the series.