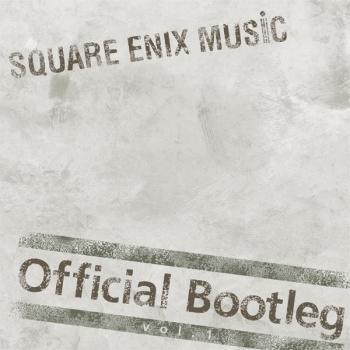 The Square Enix Bootleg series is a series of small albums released exclusively through iTunes. They feature original compositions, mainly of a electronic and rock nature, from a variety of synthesizer operators and small-time composers currently at Square Enix. This is the first in a series of three.

"Damage" is a joint work between composer Kumi Tanioka and synthesizer operator Yasuhiro Yamanaka in the spirit of Code Age Commanders. It is a really interesting fusion of sounds since it features divergent acoustic and electronic elements. The simple and fragile melody alternates between soft flutes and oboes and never really develops; the instruments revolve obsessively around just a few notes, but still manage to create a gorgeous Celtic- and Asian-inspired sounds. When placed with the more elaborate electronic bass life, a fascinating timbre is created and the piece sustains its 5:38 playtime. This mellow piece is really one of the highlights of the album.

"Ice Field" was composed by Tsuyoshi Sekito, an arranger for the Black Mages and composer of The Last Remnant. He creates a pretty interesting composition as well through a fusion of electronica, orchestral, and rock elements. In fact, this really could fit as one of his battle themes in The Last Remnant. It has that same style of sound to it with hard bass riffs, eerie synth vocals, and flashy guitar work. A surprise, though, is the addition of two piano-focused interludes that provide a brief respite from the aggression. Overall, I actually think this theme is a lot better than a lot of his stuff on The Last Remnant. It's an exhilarating theme and the electric guitar solo really helps add so much to the theme. Kudos Sekito! Fantastic job!

"Dog Field," composed by Masayoshi Soken, known for his work on Mario 3 on 3, deviates from his normal synth style to create a vocal rock theme. The vocals from The Bouncer's "Forevermore" was sampled, warped, and distorted almost beyond recognition creating some very abstract sounds. Though a novel experiment, the vocal use is grating here and the supporting guitar work is merely decent. I much prefer his bubblier style, but this isn't too bad. Continuing on rock vocal themes, we have "Emptiness And" by Takeharu Ishimoto, subsequently a bonus track on his soundtrack to The World Ends with You. This is a pretty fitting title in my opinion. While there are some Ishimoto themes that I enjoy, albeit very few, this is one of his themes I put in the throwaway category. It is better than a majority of his rock, as it does seem to go places at times, but in the end, I'm not really feeling any inspiration in this one. Some people will probably disagree with me, though.

Ryo Yamazaki, who served as synthesizer operator for Masashi Hamauzu on Unlimited Saga among others, offers "Colored Monotone". This definitely has a Hamauzu-like influence to it, probably attributed to their working together, and features a mysterious yet bubbly melody. There is also a variety of nice synth effects used to give it a nice ethereal atmosphere. It's not a favorite of mine, but it certainly creates a lot of color despite its synthetic construction. The last theme, "Split," is composed by Mitsuto Suzuki, who served as synthesizer for Hamauzu on the recent Sigma Harmonics and will reprise his role in the upcoming Final Fantasy XIII. This theme has a nice ambient electronica feel with some subtle rock influences to it. The vocals aren't my favorite, but it seems to be part of his signature style. Indeed, this theme, among others that feature vocals, can be found on his first solo album, In My Own Backyard.

Overall, the first Square Enix Bootleg album is pretty decent. Most of the composers do a fantastic job, especially the Tanioka / Yamanaka combo, as well as Sekito. The rock vocal themes are rather weak, but they do offer a contrast the electronic nature heard in the rest of the album. I think it's worth picking up through iTunes, but you might want to try to preview it before buying.