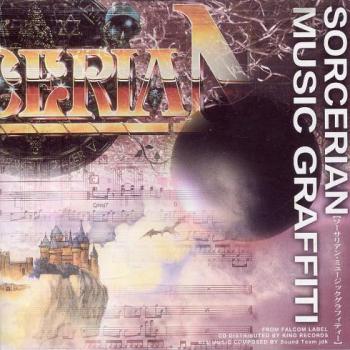 Sorcerian has an incredible large discography for what is essentially a single game. The discography is so large that many fans might feel lost and overwhelmed about what to buy. In 1997, Falcom decided to give fans a helping hand by compiling together fourteen arrangements of the game's music. The resultant album was a pre-order bonus with Sorcerian Forever Premium Version for the PC. Did it satisfy?

The album opens with the rendition of "Opening" from the Perfect Collection Sorcerian Vol. 1. Though not as subtle as the original, the combination of flute, piano, and strings is nevertheless elegant and emotional. Most of the rest of the album focuses on more obscure arrangements from the series' history. Taken from Sorcerian Forever I, "Dungeon (The Lost King's Spectre)" isn't as texturally colourful as the original, yet the big bold synth sound is ideal for belting out those charismatic melodies. The final battle theme "King Dragon" from Sorcerian Forever II also sounds more haunting than ever and the bizarre synthesis really brings it to live. However, it's somewhat regrettable that the theme doesn't develop fully or loop like most would have expected.

The items taken from Sorcerian MIDI Collection tend to be quite weak. Comparable to the work of amateur arrangers, they tend to be quite simplistic interpretations of the originals and use basic albeit tolerable technology. "Survivor" is quite a dynamic and well-developed arrangement that retains the exuberant feel of the original, while the orthodox arrangement of "Cave I" brings a more epic and expansive tone to the album. However, both tracks seem to lack the rich timbres and expressive range most would associate with great arrangements. Even the rocked-up "Blue Dragon" is too tame to really rouse most listeners.

The piano arrangements tend to be considerably better despite also being synthesized. The opening romantic fluorishes of "Tower" are among the most impressive moments of the album and the subsequent body of the piece is simply heartbreaking. Meanwhile the The town theme "Pentawa I" sounds jazzier than ever in his rendition here, offering meaty chords in the treble and a jagged bass. It's got so much character that many non-pianists would be fooled into thinking it was a true performance. The remainder of the album features vocal arrangements taken from Special Boxes, ranging from the appropriately titled "Beautiful Josephine" to the dubiously sung "All Because of You". These arrangements are bound to split listeners and not everyone will love them.

Sorcerian Music Graffiti is one of the least worthwhile additions to Sorcerian's discography. There are a few good arrangements here, but the majority are selected from weak or marginal sources. As a whole, it also doesn't come together that coherently, despite largely following the narrative of the original score. Those looking for a better compilation should stick to The Very Best of Sorcerian instead.

3. CANE OF THE VANISHED KING: DUNGEON
sorcerian forever I

14. ALL BECAUSE OF YOU
falcom vocal collection I


[note: this was bundled with 'Sorcerian Forever Premium Version'.]
Album was composed by Falcom Sound Team JDK and was released on June 27, 1997. Soundtrack consists of 14 tracks tracks with duration over about 50 minutes. Album was released by Falcom.