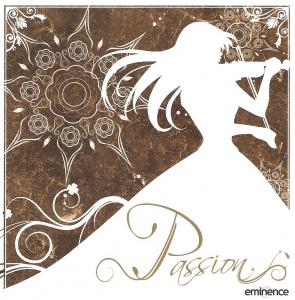 At first glance of the track list, one thing becomes evident: this is an album for Uasimpro Mitsuda fans. There are other composers' works here, of course, but the limited instrumentation assures that this will be a very consistent listen. Over half of the pieces on here are by Mitsuda, which is something to behold. The selection also seems to pick the very best of Mitsuda's scores, from KiRite to Chrono Cross, and the members of the Eminence Symphony Orchestra, here stripped down to an ensemble of two violins, piano, guitar, and percussion, have proven themselves in the past to be very apt performers. With so much potential, how does this album fare?

Mitsuda has a gift for many things, melodies, atmosphere, and the fact that even his most threatening, urgent music has a kind of elegance that makes it entirely unique. "Is KiRite Burning Up?" was the opening track to the score for KiRite, and it was a marvelous piece. All sounds, from acoustic guitar to electric guitar to violin to vocalist, created a peaceful setting that was able to increase tempo considerably and still remain fluid. Here, the acoustic guitar is replaced by an electric guitar, and the vocalist is replaced by the violin. A professor told me once, "It's easy to make noise, but it is a challenge to make that noise into music", regarding playing with feeling. The violinist here seems to content simply the playing the notes, but not the emotion, and the piece suffers for it. Also, when the tempo is beginning to increase, the violin still has a somewhat slow section while the percussion has already made the transition, making that final jump to the fast tempo very jarring. The electric guitar has too much of a grungy sound, killing the peaceful mood of the original. It ends up sounding not like an original Mitsuda piece, but rather an imitation of Mitsuda that falters because of the lack of dedication from the performers. It's amazing how good music can be so greatly wronged by bad performances. Ko Otani's "Free Bird", from the anime Haibane Renmel, is a very simple arrangement with little variety in instrumentation. The piano and guitars take the harmony, and the violin takes on the melody; they are separate, never interacting, and there is little variety rhythmically. Also, the recording quality here is noticeably poor; the violin sounds outright muffled, and the performance is lacking in emotion again.

Next comes Yuki Kajiura's "Sakura" from Xenosaga Episode II, and by this time I had come to expect little emotion from the performers, but they actually gave it a bit more effort than the previous tracks. Again, simplicity reigns here with first and eventually second violin solos over open chords in the piano. Mitsuda's "Time's Scar" is next and continues the streak of almost-decent tracks. The original from Chrono Cross featured a flute playing the melody in the opening section, and the effect was magical; here, of course, it is played by the violin. By this time, I've grown tired of the violin, which is the showcase, it seems, of every track. Luckily, when the faster paced second part comes in, it comes in hard and heavy. I know I already said that Mitsuda's pieces should be flowing and elegant, but for once, the contrast between these two sections, from light and airy to harsh and percussive, is great enough that it rekindles the appeal. "On the Beach of Dreams ~ Another World", also from Chrono Cross, unfortunately kills the good streak this album was having. The original was a superb piece for solo violin; therefore I was more accepting of the reliance on the violin here. What I was not okay with was the fact that the drums were drowning out the lyrical lovely melody in this version. There's a guitar providing harmonies, and in my opinion, the piece would have benefited greatly had it just been the guitar and violin playing with no drums to kill the mood. We're back onto a good streak, however, with Xenosaga Episode I's "Pain". A piece for solo piano, it boasts another magnificent Mitsuda melody, and, as best suits Mitsuda's style, a simple arrangement. What results is an emotional piece of music that calms the nerves.

One of the problems I've had with the violinist is that the playing is always too loud and has too much vibrato, making it sound very superficial. At last the violin evokes true emotions with the next piece, "Radical Dreamers" from Chrono Cross. After a very simple beginning for acoustic guitar, the violin plays an inspiring melody. Unfortunately, there is little variation in instrumentation, and the only variety, thematically, that the piece gets is nearly three-fourths of the way through with another violin, although it does produce some nice counterpoint. Overall, though, the piece does not hold interest as the original did or the version on the Eminence Symphony Orchestra's Destiny - Dreamer's Alliance CD for that matter. And now, I wonder, is it possible to have at least two good tracks in a row? It seems not. "Sailing to the World" from The Seventh Seal was a great piece of music, but the arrangement brings up all the problems I have with this CD — superficial playing, overly ambitious percussion, which drowns out everything else, and bad sound quality with little resonance — giving it a very stale sound. If nothing else, the playing on the other tracks was at least technically sound. Here, however, a new issue arises with the fact that the opening violin solo is slightly off tempo, speeding up to catch up, then slowing down because it overcompensated. This piece should have been a standout cue, but lack of any emotional core, which is what Mitsuda's music thrives on, makes it yet another waste of time.

Now we get our first Hitoshi Sakimoto piece for the CD, "Ferris Wheel" from Colors of Life. Wouldn't you know it's another piano and violin duet? Since the majority of pieces on this album are by Mitsuda, this piece becomes a highlight simply because of its diversity. The melody is soft, the piano work here is more intricate than any of the previous pieces, and another violin comes in to provide more colour later on. The sweet sounds that this cue evokes run the gamut from sorrowful to hopeful to downright playful. An excellent track, this may very well be one of the only redeeming factors on this album. "Mai" from .hack//Liminality is another good addition to the album. The guitar provides a constant pulse for which a violin melody takes off from. When the melody is at rest, open chords on the piano carry it to the next phrase. The middle section gets increasingly dissonant before subtly resolving into the original melody. One thing that makes this cue stand out is the fact that the sound quality is very noticeably better than the rest of the tracks. There's an appropriate amount of resonance, and all instruments are heard with crystal clarity, and they are well integrated. The piece ends with the violin and the piano, being stripped away of all other elements. The last track, "The Sunlit Earth" from Shadow of the Colossus, is another breath of fresh air. It's one of the only fast paced tracks on the album and is scored for piano solo. The entire piece consists of mainly triplets to provide it with both its melodic and harmonic content. This is the best track on the album, and I'm glad they saved it for last.

This album is a mixed bag, for sure, although the mediocre and sometimes downright bad tracks dominate. The performances by the Eminence ensemble are less than convincing and the sound quality is very inconsistent. The track selection leaves something to be desired with the majority being typical low-key Mitsuda pieces. No matter how good they are, they grow old very fast when there's little variety. Another issue that seems to plague most of the arrangements is the fact that they pale in comparison to the originals. There are many wasted opportunities here, and unfortunately the very few great tracks have not enough weight to save this CD. I cannot in good conscience recommend it to anyone. Check out the originals, because many pieces here have been tarnished. My rating, which I feel is still very generous, is below.

Time's Scar, In the Beach of Dreams - Another World & Radical Dreamers
from Chrono Cross

Sailing to the World
from The Seventh Seal

The Sunlit Earth
from Shadow of the Colossus

Ferris Wheel
from Colors of Life

This CD was sold primarily to paying attendees after Eminence's various Passion concerts at Melbourne and Sydney, Australia; Singapore; and Baltimore, Maryland, USA; though it can occasionally be found through other outlets.

Special Thanks to: Elaine Chia, Adrian Tan, Anthony Fok, Danny Ma, Aidina Aierken, Chris Chan, Casey Poon, Lucy Yeoman... And an extra special thanks to the whole Eminence crew for their continued efforts in supporting Eminence.
Album was composed by Хитоси Сакимото / Кё Отани / Ясунори Мицуда / Юки Кадзиура and was released on April 20, 2007. Soundtrack consists of 11 tracks tracks with duration over about 35 minutes. Album was released by Eminence.