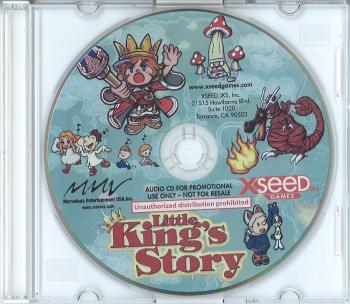 Little King's Story, known in Japan as Osama Monogatari, is a simulation game coming out for the Wii later this year in Japan. The soundtrack is handled by Yutaka Minobe and will feature a selection of classical pieces in arranged form. This review is for the small promotional album that was recently released.

For the most part, this album is pretty whimsical in approach. Carmen's "Toreador's Song" retains the folksy sound heard in the original and adds a nice playful sound with the accordion. However, the vocals, which replace words with tonal chants, detracts a bit from the piece overall. It's a nice listen, but the original is better. The other piece from opera, "Habanera," is also a whimsical arrangement. Starting off rather slow and string focused, it changes in tempo and eventually focuses more on a piano-based arrangement. There are sporadic operatic vocals thrown in every once in a while, but they aren't really necessary if you ask me.

Tchaikovsky's works are also featured on this album in the form of "Dance of the Cygnets" from Swan Lake and "Dance of the Sugar Plum Fairy" from The Nutcracker. The former is a playful arrangement that utilizes a string ensemble with an obnoxious woodblock for the duration and some interesting subtle electronica undertones. The latter is fairly straightforward and doesn't really deviate too much from the original, but the addition of some vocals makes it sound a bit too creepy to me.

"Gnossienne No. 1," originally composed by Erik Satie, takes a minimalistic piano piece and arranges it in a very playful manner. Woodwinds and strings are the dominating feature in this piece and help add a lot of character to arrangement. "La Campanella," originally composed by Franz Liszt, is the most classically-oriented of the arrangements. It's a nice string and piano arrangement of the original and the violin really helps bring the melody to the forefront. Lastly, "Feierlich und gemessen, ohne zu schleppen," by Gustav Mahler, is probably the arrangement with the most character. It's a nice acoustic guitar arrangement that features some interesting percussion work. It also includes some Spanish influence in terms of soundscapes. It's one of the better arrangements on this promotional album.

Overall, this promotional album is a little underwhelming. While there are some nice arrangements, namely Mahler's and Liszt's, most of them have elements that detract from the overall experience. I'm sure true classical music fanatics would probably find most of this album appalling, but given that I don't listen to much classical music, I found some enjoyment in some of the pieces. It's a whimsical approach on some of the more romantic composers, but it doesn't succeed too well in adaptation. Perhaps the full soundtrack will be better.

"Gnossienne No. 1" composed by Erik Satie

Promo album released at a GameStop conference in Las Vegas.

Album was composed by Erik Satie / Ференц Лист / Georges Bizet / Gustav Mahler / Пётр Ильич Чайковский and was released on 2009. Soundtrack consists of 7 tracks tracks with duration over about 20 minutes. Album was released by Xseed Games.