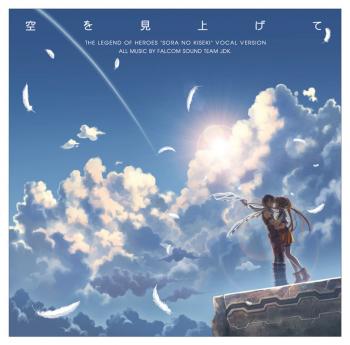 As the Sora no Kiseki trilogy has progressed, vocal themes have become a more prominent component of the series. The Legend of Heroes VI Sora no Kiseki Vocal Version is a commercial release that recognises this phenomenon. Featuring music from the first two chapters in the trilogy, this album features five new vocal performances and five others taken from sources such as the series' soundtracks and promotional arranged album. This will be bliss for those just looking for vocal themes, but other collectors of the series might feel cheated by what is offered.

There is a considerable amount of derivative material on this album. "Where the Stars Are" is an adaptation of one of the central motifs from the First Chapter's soundtrack. u-mi proves a suitable vocalist for the theme and is able to emphasise the beautiful shape of the melody and the melancholic lyrics. Due to the conservative instrumentral arrangements, there perhaps isn't enough timbral contrast to sustain the continual repetition of what is ultimately a rather simple melody, but it's still enjoyable. Two arrangements are also taken from The Legend of Heroes VI Sora no Kiseki Super Arrange Version. The "Love Theme" is interpreted with a reflective female vocal performance and gentle guitar backing, though it considerably pales relative to the piano version. More desirable is the vocal interpretation of the "Sora no Kiseki" main theme. Ayako Shibazaki's performance is reserved and melancholic, while the instrumentals are colourful yet understated, blending jazz piano work with heart-breaking string overlays.

There are also two performances taken from the Second Chapter's soundtrack. "Silver Will, Golden Wings" is actually an inspired vocal arrangement of the First Chapter classic "Silver Will" complete with pumping techno beats and gliding string overlays. The song doesn't really offer much in terms of the game's storyline, but it's still an exciting composition during the opening and ending sequences of the game and introduces some mainstream appeal to the album. The extended version is featured in the vocal collection, complete with a passionate violin solo. The pop ballad "I Swear..." is written much in the tradition of other ending themes with slowly building vocal melodies and soft piano backing. Kanako Kotera's vocals didn't capture me like the other singer, but she is still a poignant performer. It's also enjoyable how the song blooms from its gentle origins to its much more colourful chorus section. It's a very standard song, but still well-produced.

There are also five new vocal arrangements created for the collection, but they're a pretty mixed bag. Probably the biggest surprise is "Maybe it Was Fated", since it's a power rock piece amidst a pile of J-Pop ballads and anthems. It's pretty fun thanks to the wild vocal performance by Hiroko Yamawaki and the extravagant guitar work during the solos. However, the full guitar interpretation in The Legend of Heroes VI Sora no Kiseki First Chapter & Second Chapter Super Arrange Version is even better. Another stylistic shift is offered in "Lumière dans Dédale". This attempts to blend whispering French vocals with jazzy instrumentation. Though I respect the creativity, I'm really not sure the arrangement works due to the peculiar vocal style. In fact, the vocals and instrumentations don't seem to come together well at all. Fear not, however, as the saxophone-based instrumental version is sublime despite losing some of the French influence.

Moving back to more typical J-Pop, "Dive into Your Fate" is an upbeat techno-infused track to open the album. It's actually pretty good and a close second to "Silver Will, Golden Wings" in terms of catchiness. Kanako Kotera also returns to interpret "Missin'". This is one of the deeper arrangements on the soundtrack, since it blends a heart-breaking slow-developing melody with nostalgic lounge-style jazz instrumentals. It won't capture everyone's hearts, but many will endear to it during its extended seven minute playtime. The album ends with another love ballad, "Looking at the Sky"; though rather typical, it's a solid finish to the soundtrack thanks to the touching performance by Kanako Kotera. Hardcore collectors might be disappointed, however, since the exact same arrangement was eventually reused to conclude The Legend of Heroes VI: Sora no Kiseki the 3rd. That therefore leaves just four exclusives on this album...

There is a second disc on this vocal collection, but it's not a worthwhile one. These feature the karaoke (or off vocal) versions of all ten songs featured on the first disc. As any game music fan will know, karaoke versions are simply songs without their lead vocalists, leaving behind just some instrumental backing tracks and some backing vocals. These aren't good for stand-alone listening and will be of limited purpose otherwise for consumers. Take note that the instrumental versions featured in The Legend of Heroes VI Sora no Kiseki First Chapter & Second Chapter Super Arrange Version replace the vocalists with all sorts of virtuosic lead instruments instead, rather than simply omit the vocalists.

The Legend of Heroes VI Sora no Kiseki Vocal Version is ideal for consumers just looking for the vocal themes of the trilogy. All the original and arranged vocal themes from the first two games are here in both their full vocal renditions and their karaoke versions. That said, this album will be of more limited value for those interested in purchasing other albums in the series. Due to an amazing amount of recycling, only four of the performances here are completely exclusive and, in my opinion, at least two of those are completed surpassed in their instrumental versions. Those interested in the wider and greater Sora no Kiseki experience can probably happily miss out on this album.