The Legend of Heroes Sora no Kiseki Theme Song Album 2 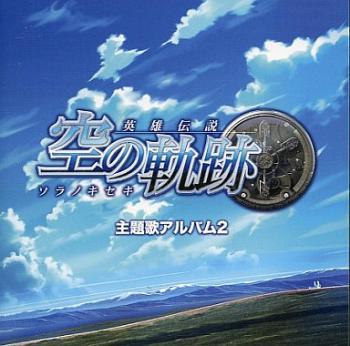 As the Sora no Kiseki trilogy has progressed, vocal themes have become a more prominent component of the series. The Legend of Heroes VI Sora no Kiseki Theme Song Album 2 compiles three themes from the series. Bundled with a drama CD for the series, the album also provides a preview of what to expect from the drama with its cast commentary. Let's take a closer look...

The album opens with the full version of the third chapter's theme song, "Cry for Me, Cry for You". It attempts to repeat the success of the second chapter's "Silver Will, Golden Wings" with its frivolous vocal performance and upbeat technofied instrumentals. Somewhere down the line, however, it ends up sounding like a rather bland and generic J-Pop song. The melody isn't particularly memorable, the English lyrics are sometimes mispronounced, and the electric guitar elements are quite unwelcome in the usually organic theme songs of the series. The extended version is considerably better, due to some slightly more intricate development, but still underwhelming.

Next up is the ending version of "Looking at the Sky". This is a love ballad based on an instrumental theme from the Second Chapter. Though rather typical, it's a solid finish to the soundtrack thanks to the touching performance by Kanako Kotera. It's frustrating that this theme is pretty much recycled from the first theme song album, however. As derived from the promotional arranged album, there is also a vocal arrangement of the First Chapter's "Love Theme". Interpreted with a reflective female vocal performance and gentle guitar backing, the result is quite touching, though it considerably pales relative to the piano version.

The theme song concludes with two cast commentaries, dedicated to latter drama albums in the series. They are taken from The Legend of Heroes Sora no Kiseki the 3rd Drama CD ~Tama no Kokuin~ and The Legend of Heroes Sora no Kiseki Drama CD - Joshua Story ~Sealed Memory~. They are audio recordings of a cast get-together for the series' drama albums that the theme song albums are packed with. During the 18 minute commentary, the cast introduce themselves, discuss the adapted and new scenarios, and discuss their memories of the project. Needless to say, thisone is for Japanese speakers only.

The Legend of Heroes VI Sora no Kiseki Theme Song Album 2 isn't a definitive collection by any means. It simply recycles two theme songs from the third chapter and adds in a random arrangement for the First Chapter. This album was bundled with a drama album for the series, so is difficult to find other than second-hand and the exclusive cast commentary indicates it was mainly created for Japanese consumers. I'd avoid this one and stick to the original scores and first theme song album instead.