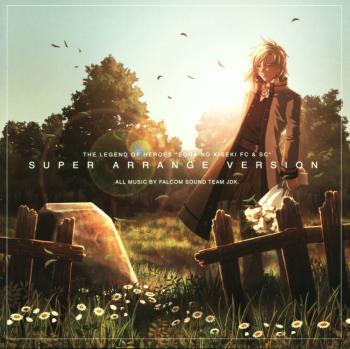 In 2004, Yukihiro Jindo joined the Falcom Sound Team J.D.K. exclusively as an arranger. During his time at the company, he has helped to revolutionise the company's sound with his diverse and high quality arrangements, handling everything from remake soundtracks to Super Arrange Versions to the revived J.D.K. Band. His first full effort, the The Legend of Heroes VI Sora no Kiseki Super Arrange Version, gives some insight into just how multitalented the arranger is. However, it was produced for a bonus with first editions of the game and not a commercial release. Perhaps this is for the best, as the album does feature several limitations despite the obvious talent behind it...

The album opens with a rendition of one of the biggest highlights from the original score, the 'violin meets techno' action theme "Silver Will". On the arrangement, Akiko Nagano actually performs the violin line and offers a much more radiant and elaborate performance. Unfortunately, the arrangement doesn't sound quite as natural as the original, perhaps because the lead violin is so pronounced that it no longer integrates well with the synthetic techno harmony. Several other accomplished arrangements suffer due to implementation problems. While Yukihiro Jindo did an excellent job expanding the ancient sound of "Rock on the Road", the violin focus once again sounds quite contrived. Though "Sophisticated Fight" offers a sublime saxophone performance and some excellent new improvisations, the synthetic aspects are poorly integrated and the brass work sounds particularly heavy-handed. This is a pretty crucial flaw, since the interpretation loses the carefree and dynamic sound of the original.

One of the genuine highlights of the arranged album is the interpretation of "The White Flower Madrigal" suite from the original score. Yukihiro Jindo carefully integrated the eight pieces from the original score into a three movement orchestral suite. The second movement is the major highlight. Following an ornate Baroque-influenced interpretation of the "Castle" theme, the movement takes a dramatic twist with the entrance of the grandiose and funereal chords from the "Colosseum". The subsequent "Duel" performance sounds even better with its dashing chord changes and bombastic accompaniment, creating the atmosphere of an authentic Medieval duel. I have niggles about the suite, such as unnecessary tuning featured at the opening of the first mvoement or the comparatively anticlimactic feel of the third movement, but it's still quite a highlight overall.

Among the highlights of the album are the two interpretations of the love theme. The extended piano interpretation captures all the melancholy and beauty lying behind the original and features even more impressive jazz writing than most arrangements in The Legend of Heroes Piano Collection. The second arrangement is a surprise at the centre of the soundtrack with its combination of a reflective female vocal performance and gentle guitar backing. However, the album reserves the main vocal performance for the conclusion of the album. Following a spectacular orchestra and chorus interpretation of the battle theme "Those Who Protect the Treasure", the album offers the much-desired vocal performance of the "Sora no Kiseki" main theme. Ayako Shibazaki's performance is reserved and melancholic, while the instrumentals are colourful yet understated, blending jazz piano work with heart-breaking string overlays.

Overall, The Legend of Heroes VI Sora no Kiseki Super Arrange Version is a little sparing as an arranged album. Of the ten tracks, I'm not convinced that at least three are more enjoyable than their originals, mainly because of the unconvincing blend of synthesized and recorded instruments. Nevertheless, the three movement orchestral suite, two vocal arrangements, piano improvisation, and final battle theme are genuinely well done. The album represents a good first effort from Yukihiro Jindo, but isn't necessarily worth searching down. Those looking for a richer experience ought to head straight for The Legend of Heroes VI Sora no Kiseki First Chapter & Second Chapter Super Arrange Version, a two disc commercial release that compiles most of the material from the promo album and quite a bit more.