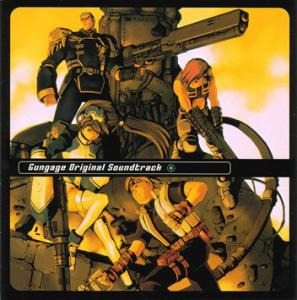 In 1999, Michiru Yamane and Sota Fujimori teamed up to score Konami's third-person shooter Gungage for the PlayStation. The score built on Konami's past approaches to action scoring by taking inspirations from the Gradius and Castlevania series. However, it was also an obvious attempt to really modernise Konami's sound with plenty of fresh electronic, rock, and modernist compositions and excellent sound quality. With a mixture of old and new, is this score a Konami fan's dream? Let's take a closer look...

"Gungage" opens the soundtrack with a groovy electronic beat and some chorus-supported orchestral motifs. Though quite short and derivative, the theme blends together several elements effectively and is rather catchy. The character select theme "L.A. Cruising" ensures a great start by fusing jazz fusion guitar melodies reminiscent of Konami's classic scores with Sota Fujimori's characteristic bubbly techno beats. The first stage theme "Weatherbeaten Town" is a highlight composition that blends electronica, rock, and orchestral sounds. Clearly Michiru Yamane's work, the string melodies are simply fantastic while the background instrumentation such as electric guitars, percussion, and organ are well done. It's a driving and fun track and definitely one of the best tracks from this score. "Brilliant Green" continues there where "Weatherbeaten Town" ended with a similar style. It's just a little more faster and jolly. While short, it's another brilliant theme for sure.

Moving on to other stage themes, "Enlargement Coleopteran" is very effective at intensifying the game early on. Electronic beats, orchestral and piano discords, and ethnic influences are all layered on top of each other in a tense yet coherent way. "Brilliant Green" is another welcome tribute to classic Konami shooter scores with its upbeat jazzy melodies, distinctive slapped basses, and emotional string-led second section. Yamane's "Crystal Lake" combines percussion, woodwind, piano, and various bell effects to create a nice jazz-tinged track with a rather melancholy atmosphere. Back to Fujimori, the especially fresh stage themes "Your Absolute Revolution" and "A Research Laboratory" offer beautiful trance soundscapes and irresistible rhythms. Moving on to the climactic stage themes, "Armament Train" combines frenzied orchestral and rock work with avant-garde piano work to powerful if unaesthetic effect, while "The Road for Underground" is a very atmospheric blend of experimental rock, techno, and industrial forces.

There is a battle theme to accompany each boss. "Giant Spider" demonstrates that the game is a mean one right away by combining orchestral dissonance with rhythmically jagged bass lines inspired by Metal Slug's boss theme. "Poison Moth" is filled with bombastic orchestration and chorus use reminiscent of Yamane's work on Lament of Innocence, whereas "Vitrifaction Fire" is similar to boss themes from Symphony of the Night with its use of church organ and orchestration. The same goes for "Mud Monster" with its fast-paced rockin' rhythms and gorgeous adrenaline-pumping synth lines; it would have been a real gem were it more developed. "Guardian Robo" and "Burning Combat" assert Fujimori's stylistic tendencies more their hard techno bass lines and dazzling electric guitar melodies. Moving to the last boss themes, "The Big Boss" is a blistering hardcore track that will be really appreciated by fans of the genre. Yamane receives the honours of leading the score out with "The Last Dissolution", featuring discordant orchestral and piano work once again inspired by modernist composers.

There are nevertheless some weaker contributions to the CD. "Dark Moon", for instance, is a short and uninteresting track featuring strings and distorted electronic noises. "Messages" is an initially interesting blend of ethnic and ambient forces, but like so many of Michiru Yamane's compositions in this style, doesn't seem to go anywhere and lacks anything beyond superficial creativity. There are also quite a few filler tracks to finish the soundtrack too, such as the short and sentimental "Wakle's Portrait" and "Steyr's Portrait". "Flashback Memory" makes up for these weaker themes with a great end credits track. It once again stays true to the classic Konami style with jazz fusion melodies an light accompaniment. However, it sets itself apart from its predecessors due to the sophistication of the lead electric guitar work. Not only is it implemented fantastically, but it develops really exuberantly too.

The Gungage soundtrack is a very dynamic and energetic action score. It complements the game fantastically with varied emotional stage themes and action-packed formidable boss themes. It often stays true to the Konami sounds with Fujimori and Yamane's respect tributes to Gradius and Castlevania. However, it also does a great deal to modernise Konami's approach to action scoring with its integration of various styles of electronica, elaborate guitar passages, and dissonant piano and orchestral work. For those who don't enjoy the radical experimentation here, only a few tracks such as "Weatherbeaten Town", "Crystal Lake", "Mud Monster", or "Flashback Memory" will stand out and this isn't really enough to justify a purchase. If, however, you're a fan of rock and electronica scores, this is definitely something for your listening pleasure. It's definitely a fantastic action score, but not really recommended for all.

Main Programmed by
Veda "AHE" Hideo [KCET]
Album was composed by Митиру Яманэ / Сота Фудзимори and was released on August 06, 1999. Soundtrack consists of 30 tracks tracks with duration over more than hour. Album was released by Konami Music Entertainment.