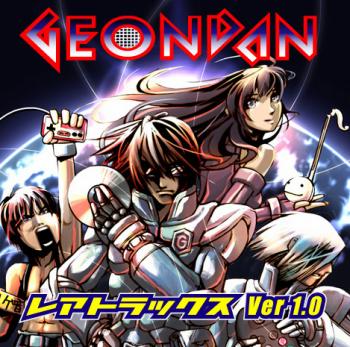 In 2009, Yuji Takenouchi started the ever growing Japanese composer alliance GE-ON-DAN. Formed as a way to network and promote friendly competition amongst Japanese composers, they have participated in a series of project since its inception, most notably arrange albums for the music of CAVE. During Comiket 78, they printed and published their first original album, GE-ON-DAN Rare Trax Ver. 1.0, with startup money provided by Hiroki Kikuta. Featuring compositions from 21 members of GE-ON-DAN, including Yuji Takenouchi, Hiroki Kikuta, Kinuyo Yamashita, and others, it features a variety of styles. How does the first original album from the alliance turn out?

The album opens up with a composition by AKANE, entitled "Soaring." It's a very unique composition that progresses with its distorted synthesizer and beautiful percussion to evoke a very ethereal yet liberating atmosphere. As the theme intensifies, it incorporates some beautiful Asian instrumentation that invokes a sense of flight, reminiscent of composer Saori Kobayashi's work on the Panzer Dragoon series. It doesn't focus on melody, but at the same time, it doesn't really need to. In many ways, it signifies the freedom the composers had in working on this album.

Phantasy Star's lead composer Hideaki Kobayashi contributes the most classically-oriented theme here, "Let's Fall in Love". Beautiful violin and piano work are fashioned together in a way that reminds me of the SaGa Frontier II. The beautiful harmonies between the piano and violin creates a particularly romantic aura and a sense of bliss. "Love in the Air" is another romantic piece, contributed by Breath of Fire III's Akari Kaida. Showing more influences from pop music than classical conventions, it combines some striking piano work with airy strings work and ethereal synth accompaniment. In the end, it's a very heartfelt piece of music, particularly when the solo violin enters into the mix. I don't think I've heard such a romanticised theme from Kaida in quite some time. Another Capcom veteran, Seiko Kobuchi, contributes "flirt", a lounge jazz theme with smokey jazz vocals and a flute accompaniment. It's very relaxing.

"SONAR 85," by former ZUNTATA composer Norihiro Furukawa, is quite entertaining. It's an invigorating synth piece with some definite jazz influences, particularly in the accompaniment. The strong synth melody combines with the upbeat percussion and piano quite nicely and I really appreciate how many different soundscapes are produced during the duration of the piece, such as the big band brass section or the spacey synth sections. Despite all these various soundscapes, the piece flows extremely well and ends up being a solid tune. Asuka 120%'s Keishi Yonao also contributes a largely synth based piece, titled "Barely." It's another upbeat synth piece with some jazz fusion stylings, though I find it to be one of the weaker themes on the album. It is still quite enjoyable, however, and its mileage will obviously vary amongst listeners.

There are also some rock compositions featured on the album. "Jam Practice," by Kazuaki Miyaji, does a great job at creating a fantastic raw energy through its fantastic guitar work. Though I find the percussion work to be a bit on the lackluster side, I can't really fault the guitar work; it's quite awesome and it shows Miyaji's prowess as a performer, after having featured on other albums as a guitarist. Another rock track surprisingly comes from Super Mario Kart's Soyo Oka. Entitled "BOSS Botsu," it features some fantastic frenetic guitar work and heavy riffs. However, its biggest detriment is its length — clocking in at barely over a minute. For what it does during that minute, though, it's quite good.

SuperSweep's sole representation is Shoichiro Sakamoto, a prominent doujin artist and composer of 11eyes. Contributing "Brionac," he adds a ton of energy to the album. His theme is a very fast paced synth led piece with a great rock backing. The keyboard work, percussion, guitar riffs, and Sakamoto's unique synth soundscapes make for a fantastic A section to the theme, while the B section replaces the synth melody with a woodwind melody. It's definitely one of my favorite Sakamoto tracks as well as one of my favorites on the soundtrack. "Nightvision Phase06 ~Low Snow Rainbow~," composed by ZUNTATA's Hirokazu Koshio, is the only techno theme on the soundtrack. It really reminds me of something I'd expect to hear from TECHNOuchi, which is a good thing. Koshio really manages to create a very competent house track with some beautiful piano work, particularly in the intro and during the slower, more dramatic sections of the composition.

There is also some retro style soundscapes featured on the album. "G-Radius IV," by Ridge Racer's Kota Takahashi, is an extremely energetic chiptune theme created in the spirit of the Gradius series. I love the mini chiptune keyboard solos featured throughout the piece as well as the intense percussion. It really helps add a level of immersion into the whole piece. Particularly humorous is the inclusion of a "ship exploding" sound effect followed by playful game over theme. The other retro theme is by WASi303 and is entitled "Asteroid = Manbow from 8bit Shmup." Out of all the themes, this is the only one that I would classify as an arrangement of existing themes. Taking equal parts of TECHNOuchi's "Memoire" from Space Manbow and WASi303's "Asteroid" from Psyvariar, he layers the two themes flawlessly to create an almost hypnotising arrangement. It is definitely in contention for my favorite track on the soundtrack, rivaled only by TECHNOuchi's, which I'll discuss a bit later.

There are also a couple of traditional vocal themes on the album as well. "Our Time Will Come," composed by Kinuyo Yamashita and localised by Thomas Howard Lichtenstein, is quite a fun pop track. Yet while the theme's melody is exquisite, I find the lyrics to be quite cheesy and find they detract from the overall soundscape. Maki Kirioka's "Lullaby of the year 2300" is less enjoyable, in my opinion, and reminiscent of her childish work on Dewy's Adventure. In the end, I don't find the piece to be particularly cohesive and find the kawaii vocals especially obnoxious. "Signal" by bishoujo composer MANYO is another vocal theme, though unfortunately no information was provided regarding the performer. The vocalist isn't too nasal and manages to exude a real beauty to the piece. The accompaniment is quite eclectic; at times, you'll hear some soft jazz influenced piano, whereas at others, you might here some electric guitar or electronic beats. In the end, it manages to close the album off quite nicely.

There are also a series of entirely unconventional themes featured on the soundtrack. Kota Hoshino's "Theme from G.O.D." is probably the most unusual of the bunch. It takes vocal samples from some of GE-ON-DAN's earliest YouTube introduction videos and puts them to music. The music itself is electronic oriented and features a nice rhythm that manage to go well with the more raspy vocal samples and guitar samples. However, at the same time, this theme is probably going to be the hardest for casual listeners to appreciate. "Tokyo Swing," by Taro Fujikado, is very reminiscent of his work on Trash Panic. It's a jazz theme at its core, but it also manages to throw in a bit of Asian influence and is pretty much all over the place in terms of progression. It features some distorted vocal samples, rap vocal samples, natural noise from the hustle and bustle of Tokyo, and some crazy percussion work. In the end, it's a really entertaining theme, but one that might take some time to appreciate.

"Sakura Blossom ~G.O.D. Mix~," by Yu Shimoda, features Miku Hatsune, the famous vocaloid program in Japan, and is an Asian rock theme. It's quite the energetic theme that really manages to capture an Asian essence in its music. The inclusion of the vocaloid might upset some people who aren't a fan of high pitched vocal work, but overall, the track is quite good with some interesting percussion work, Asian instrumentation, and an edgy rock atmosphere. Another Asian soundscape is provided by TECHNOuchi. Entitled "AYA," it is easily my favorite piece on the entire album. It's a stunningly beautiful theme with some stunning Asian instrumentation, an exquisite melody, and some beautiful atmospheric touches, particularly through the use of running water. What I particularly enjoy the most is the beautiful shakuhachi work featured in the background. It's nice to see TECHNOuchi expand beyond the music I've heard on the CAVE arrange albums and it shows he can create an extremely moving composition without any dominating electronic additions.

"Akasha" by Super Robot Taisen's Takuya Hanaoka was written 12 years ago. It's another theme that goes all over the place in terms of direction, but at the same time, I think it makes the theme all the more special. At times, there are some more edgier synth rock sections which really help get the energy pumping, but at the same time, Hanaoka also offers some more calmer, spacey soundscapes. In the end, it's a very unique theme with a variety of catchy passages. Lastly, Hiroki Kikuta offers "Physical Love." This theme is definitely reminiscent of his town themes from Secret of Mana. It creates such a peaceful and laidback atmosphere with its xylophone leads and bass guitar accompaniment. I think that this is one of Kikuta's finest original themes in years and I hope it's a sign of what's to come in the upcoming Shining Hearts.

In the end, I think that GE-ON-DAN Rare Trax Ver. 1.0 is a very successful debut original album by GE-ON-DAN's members. It features a lot of variety, in terms of stylings and origins, and many of the resultant themes are quite strong. However, at the same time, I do think that some tracks could be improved in some regards, whether it's overall composition or just certain elements. I definitely recommend picking this up, despite it being somewhat difficult to import. The pros far outweigh the cons and it definitely reflects the composers exercising compositional freedom. I immensely look forward to GE-ON-DAN Rare Trax Ver. 2.0, due out this December.

Released at Comic Market 78. An actual CD will be released without the cover image.