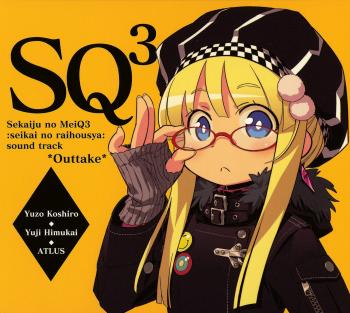 The promotional album opens up with "Dungeon Test Music (Piano Ver.)." Presumably a piano version of an prototype labyrinth theme, it features an exquisite melody and really has an endearing and calming atmosphere to it. "Dungeon First Stratum (Piano Ver.)" is a piano rendition of "Labyrinth - Waterfall Woodlands" from the final version of the game. Similar to the "Dungeon Test Music (Piano Ver.)," it features an extremely tranquil and calm atmosphere and the melody is absolutely superb. Having heard the original version, I find that it really translates well to piano.

The remaining themes are all prototype battle themes for the game. The first, "Battle Music Outtake - The Night before the First Campaign" features a fantastic, energetic atmosphere and melody that features a heavy focus on percussion. "Battle Music Outtake - Blood-Stained Sword" is an ominous theme full of ominous synth tones, choral work, organ, and percussion. It's a bit disjointed in nature, but I think it only adds to the chaos.

Moving to the final tracks, "Battle Music Outtake - Unseen Signs of the Enemy" also features an ominous atmosphere. The accompaniment and heavy use of percussion really help give off feelings of suspense and fear. Lastly, "Battle Music Outtake - Decisive Phantom Battle" is another powerful and ominous theme that features organ and choir melodies over top a somewhat electronic beat. It's one of my favorites on this promotional album.

Is it worth picking this up on an auction site like Yahoo Japan Auctions if you didn't preorder the game? Personally, I don't think it's worth it, although this is easily the strongest of all the promotional albums released with the games. The piano themes are absolutely gorgeous and a nice little bonus. The battle themes are also pretty good too, but it's probably best to wait for the original soundtrack as you'll get more themes and you'll get the themes that weren't rejected for one reason or another. Still, I did manage to walk away impressed.

First Press Bonus. Contains a prototype track and unused tracks.
Album was composed by Юдзо Косиро and was released on April 01, 2010. Soundtrack consists of 6 tracks tracks with duration over about 20 minutes. Album was released by Atlus.