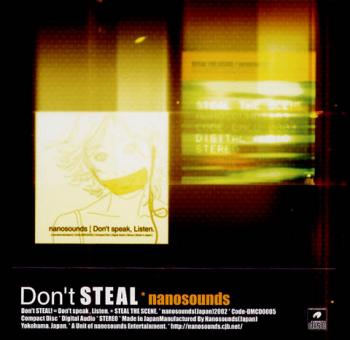 The Nanosounds albums have really impressed me so far, with their fusion of different styles of jazz. The selection of Namco composers has always been top notch, and the same can be said about their contributions. This album somewhat took me by surprise though. While I expected another jazz dominant score, what was delivered was a little bit different. Instead of being straight jazz, this entry fused the reoccurring jazz theme with electronica tying it much closer to its sister albums, the NanoSweep selections. We even get to see some NanoSweep composers pulling out the jazz for this as well, such as Hiroshi Okubo, Nakany, and Koji Nakagawa. It's actually a compilation of two rare previous Nanosounds mini-albums, Don't Speak, Listen and Steal the Scene, sometimes with slightly shortened tracks. The music is more important than the back story though, so let's get on with it!

"Indigo Blue" is more jazz than electronic, making heavy use of the saxophone and defined bass lines. The clapping loop percussion ties it to this albums theme, and makes the whole experience of the piece quite enjoyable. "Moonlight Serenade" is another that throws a bigger jazz card than the others. This one is actually really cool as it takes its name literally and the included vocals are all sung by a female whispering. This gives off the illusion that it's being sung at nighttime. The music itself is somewhat of a club jazz with most of the defining instrumentation being the bass line. We do hear snippets of piano, synth, and flute, but the bass line is always leading the pack.

Koji Nakagawa really kicks the electronic gear into overdrive for his additions. "P.T.S." is one of my favorite tracks on here, for its heavy use of industrial synth and jazzy percussion loops. This piece sounds like it belongs in a racing game, as it has that same progressive techno beat heard in most games of that genre. "Speed Up", regardless of its name, also sounds like it belongs in a racing game. This one actually has no remnants of jazz in it at all. It is mostly a heavy percussion loop that speeds up as the track progresses. Nakagawa really flexes his electronic side here. While neither of these tracks have much of a jazz sound, their soft demeanor still allows them to blend in perfectly, and become some of the best tracks on the album.

"Shanghai discotheque 2001" is one track from Nobuyoshi Sano that I actually somewhat enjoy. His fusion of his typical looped electronic percussion with the jazz theme of the album is almost flawless. The only thing that is somewhat off about this track is the distorted spoken word dispersed throughout the track. Other than that though, Sano shows that this genre might just be his true calling. Another track that is highly enjoyable, but also is somewhat off due to its vocals, is "Baked Alaska". While BKO shows his jazz side more than Sano did, his vocals are also more prominent and just plain weird. I do highly enjoy the screaming brass throughout the track reminiscent of Noriyuki iwadare's jazz contributions. Don't let that turn you away though. Both tracks are still highly enjoyable on their own merits.

"Czech" is a really cool electronic piece focusing heavily on synth piano loops. The best part about it though is the distorted sax solo that comes out of nowhere. It doesn't really follow a melody at all, giving it a chaotic feel. The last track I'll mention here is another one by an otherwise unknown composer. "Bubble Chair" begins with pizzicato strings which is quickly layered upon by a jazzy bass line. The actual melody of the piece is the weirdest part here though. It sounds like a screeching synth scream, something that would be more correctly used as a melody line in a horror themed piece, and not this heavily jazz based track. it fits shockingly well though, and leaves this as one of the more developed tracks on the album.

As you can see, this really was a major shock to me. It was a good thing though, as the variety of composers and variety of styles leaves this as a highly accessible album in which most should be able to find quite a bit of substance in. It is an album I couldn't find for sale very easily however, so your attempts to hear this might be somewhat difficult. Which is a real shame, because this album has so much to offer. I really can't begin to recommend it enough. You just have to find a way to obtain it... just don't steal!