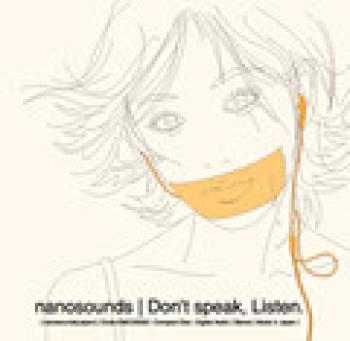 Don't Speak, Listen was the first major release from the Nanosounds artists. Before this release, they had compiled one of three demo albums, but never attempted a concept album before. The concept was evidently simple — to stimulate the ears of listeners and allow them to relax from the stressful experiences of daily life. Led by Hiroshi Okubo, a team of Namco's composers under sometimes perplexing aliases achieved this through offering a mixture of electronic and jazz music. Did they succeed?

BKO opens the album with "975", a techno composition that wouldn't sound out of place in a Ridge Racer game. While it sounds a little generic at first, it quickly becomes interesting with the gradual introductions of piano chord clusters, a few vocal wails, and a slightly exotic percussion set. Hiroshi Okubo's "Indigo Blue" is more jazz than electronic, making heavy use of the saxophone and defined bass lines. The clapping loop percussion ties it to this albums theme, and makes the whole experience of the piece quite enjoyable. This track may have inspired Okubo's decision to subsequently produce From Dusk Till Dawn.

"Speed Up", regardless of its name, sounds like it belongs in a racing game. This one actually has no remnants of jazz in it at all. It is mostly a heavy percussion loop that speeds up as the track progresses. Nakagawa really flexes his electronic side here. While neither of these tracks have much of a jazz sound, their soft demeanor still allows them to blend in perfectly, and become some of the best tracks on the album. Nagakawa's "How..." is also a notable entry here with its chillout electronic grooves and increasing jazzy feel. It's the only track that is radically different in the Don't Steal compilation, where it is cut by a whole three minutes.

"Czech" is a really cool electronic piece focusing heavily on synth piano loops. The best part about it though is the distorted sax solo that comes out of nowhere. It doesn't really follow a melody at all, giving it a chaotic feel. The last track I'll mention here is another one by an otherwise unknown composer. "Bubble Chair" begins with pizzicato strings which is quickly layered upon by a jazzy bass line. The actual melody of the piece is the weirdest part here though. It sounds like a screeching synth scream, something that would be more correctly used as a melody line in a horror themed piece, and not this heavily jazz based track. it fits shockingly well though, and leaves this as one of the more developed tracks on the album.

The variety of composers and variety of styles makes Don't Speak, Listen a highly accessible album that most should be able to find quite a bit of substance in. However, its rarity means that most won't be able to hear this without searching a lot of online auctions and paying a heavy price. Fortunately, Don't Steal compiles the music from this album and one other into a slightly more available package. Some of the track times were shortened, but most of the cuts are minor or even beneficial. Overall, a great debut from the Nanosounds team.