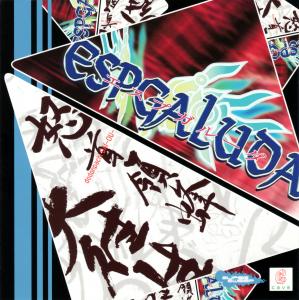 Cave's shooters DoDonPachi Dai-Ou-Jou and ESPGaluda took rather different approaches to their soundtracks. The former was composed by Manabu Namiki in his characteristic electronica style while the latter was a trance-oriented soundtrack crafted by three Cave employees. The success of these soundtracks inspired an arranged album by Super Sweep that would reimagine each of the compositions of the original. Led by Ayako Saso, Hiroto Saitoh, and Keiichi Okabe, guest contributors rounding off the line-up were Takayuki Aihara, Shinji Hosoe, Masaharu Iwata, Yosuke Yasui, Takanori Izumi, and Manabu Namiki. How does everyone perform? How do the arrangements compare to their originals? Read on to find out.

Ayako Saso introduces a laid-back style to the disc by arranging four tracks in the DoDonPachi Dai-Ou-Jou section of the album. Her creations vary in accessibility, but her arrangement of the select screen theme "Fog Warning" is very enjoyable. The steady trance rhythm in the background provides a sturdy backbone for the theme, but there is less emphasis on the drum line of the original in favour of developing the enchanting melody. Saso continues to impress with a dark arrangement of the boss theme "Burning Body"; she takes the original's amazing guitar lines and turns them into something even more awe-inspiring by adding a selection of rhythmic pulses. While the arrangement of the fourth stage theme "Mixed Melody" isn't as attractive, the mechanical instrumentation and rhythmical development ensures it is nevertheless fascinating. The name entry theme "A Sad Dream" is another catchy and quite enjoyable track, though falls behind the others in terms of melodiousness and creativity. For the ESPGaluda remix, Saso doesn't feature as prominently making a late appearance with the last stage theme "Floating Castle Urotsubune". This catchy and atmospheric trance arrangement excels in comparison to other additions on the disc. Her last arrangement for the album is the epic "Ending," which is a blend of orchestral majesty and techno rhythms. This blend works surprisingly well given the techno beat provides a melodic piano line with a strong bass line.

Hiroto Saitoh keeps the Dai-Ou-Jou section buoyant and atmospheric with several arranements. For the second stage theme "Colorful Rainbow", he creates a mystical atmosphere with a ombination of steady dance beats, ascending pitch bends, and hip-hop voice samples. The track is efficient in the speed that it develops and the atmosphere it creates, but when each part is broken down, Saitoh's mainframe of simplicity is exposed. In contrast to Saso, he lets the rhythm take a proactive role while constructing his melodies upon a series of simple instrumental threads. This style is especially exposed in his next arrangement, the last boss theme "Yellow Stream". The main melody passes through a series of different instruments in conjunction with energetic beats and novel additions like screaming sound effects. His arrangement of the ending theme is an invigorating synth vocal experience that soon builds up in calibre. As for ESPGaluda, Saitoh limits his contributions to the first stage theme "Different Blood ~ Wearing Blood". This trance anthem features a slightly more subtle soundscape to the original but still takes an adrenaline-pumping melodic approach. Saitoh even adds some original melodies that sound almost as if they are being improvised on a live keyboard. En masse, Saitoh's arrangements are pleasing as he takes the original tracks and expands upon them wonderfully.

Focusing on the remaining Dai-Ou-Jou arrangements, Takayuki Aihara builds the third stage theme "Threatening Dance" around a simple piano melody and a vigorous techno beat. The background melody in the former is brought to the forefront here to create a very different sound overall. Even more impressive is his true last boss arrangement "Red Bee", which revolves around hard Sampling Masters style electronic beats and rocking electric guitar chords to give a real feeling of power and fear. Effectively, Aihara belongs in the 'quality over quantity' clan with Manabu Namiki and Masaharu Iwata. Iwata hits the jackpot with a glorious arrangement of the first stage theme "East Asia". The melody in this track receives a lot of development in a way reminiscent of his old-school works like Shippu Mahou Daisakusen. The mixture of vocalists, clock sound effects, and blaster-like warping noises really adds to the complexity and novel. As for Namiki, he arranges his own fifth stage theme "Grieving Womb"; the key feature of this track is its upbeat style and mystical glockenspiel melodies, which both create an eerie atmosphere at first but one of dynamism later on. Unfortunately, Shinji Hosoe was obviously pushed for time on the album given he merely produces short but sweet arrangements of two filler tracks from the original. On the whole, this section of the album is memorable, atmospheric, and diverse, providing an effective build up to the ESPGaluda remix section.

The lead arranger of the ESPGaluda section of the album is actually Namco veteran Keiichi Okabe. He ensures that this section of the album is filled with electronic ecstasy through a trance approach. His first track, the third stage's "Huge Battleship Elinies", is a typical such track that should really take the stage in Ibiza. The original is completely remastered here, as although the same driving rhythm enters, the main melodic line is much more emphatic on piano. Okabe's next arranged track "Fort City" is a darker dance track that focuses more on the 'pump it up' bass line rather than a melody. This arrangement lasts for just under four minutes, but there is so much rhythmical development during this time that it's impossible to resist its beats. His last arrangement on the album is the atmospheric last boss theme "Tremendous Pressure", which is even darker than its predecessor and quite disturbing with its screaming sound effects and tempo changes. As for the remaining contributors, Takanori Izumi's second stage theme "Ravine" is the highlight. This track initially takes an airy synth approach and then develops with the addition of a series of sound effects and robotic voices. As for Yosuke Yasui, his contribution of the brief boss and stage theme are modest, but nevertheless considerably enhance their originals. Shinji Hosoe closes the album with name entry theme "The Dream Seen as a Child", a simple but ambient gem that is more notable than his Dai-Ou-Jou efforts. Overall, the ESPGaluda is more accessible and powerful than the DoDonPachi Dai-Ou-Jou section.

DoDonPachi Dai-Ou-Jou & ESPGaluda Perfect Remix is an electronic arranged album done right. The all star cast all add to the creativity and diversity of the album with a mixture of sizeable roles and guest contributions. However, most arrangements also remain faithful to melodies and other qualities of the original so mostly enhance rather than transform them. The album will be heaven for those who enjoy a range of electronic dance music and are aware of the intricacies of mixing. However, it is also quite accessible for those who don't thanks to the melodious and atmospheric approach, especially in the trance-oriented second half. Another must buy from Cave and Super Sweep.

Contains the arranged tracks from the PS2 versions of both games.


Produced and Directed by
Shinji Hosoe

Designer
OGIKUBOMAN
Album was composed by Манабу Намики / N.T and was released on January 28, 2005. Soundtrack consists of 24 tracks tracks with duration over more than hour. Album was released by SuperSweep.