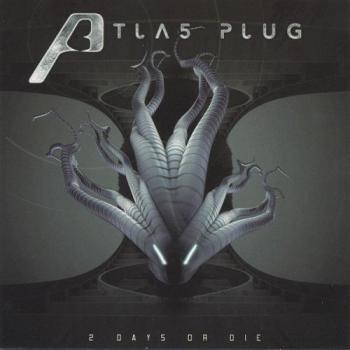 Tom Salta has established himself as a heavyweight in the video game industry in recent years with epic scores to several Western titles. However, he first came to attention with the original album 2 Days or Die under the pseudonym Atlas Plug. The ten tracks characterised Salta's dense style with their high-octane breakbeats, hip-hop vocals, rock grooves, and orchestral overlays. Iconic tracks on the album have since appeared on numerous licensed racing soundtracks.

The opener "Halfway Til Bliss" immediately subjects listeners to the aggressive style of the album. Salta creates a backing track featuring distorted rhythm guitar riffs, rapid electronic beats, and obsessively repeating piano chords. The texture of the piece varies as different forces enter and dissipate, but Salta maintains the rhythmical energy and tense mood throughout in a way few other composers would dare to. The result is especially engaging and threatening both within the album and as licensed background music in Crackdown. "Rule the World" is even more beat-heavy than the opener and Salta doesn't hesitate to make use of electronic distortions and experimental voice samples above the booming bass line. Note that it is sadly distinct from Salta's classic track "Around the World", which was made after the album was released.

There are a number of tracks on the album that are unlikely to appeal to most audiences. "The Ace, The Only" captures the bravado of a street racer with assertive voice samples against fraught electro-acoustic samples. However, the repetition of "I'm the one, the ace" and "I'm the one, the only" is likely to become boring or annoying after a while. "Get Rolled On" is a relatively misguided theme dominated by a rapper's bellows against Arabian-influenced beats. Additional samples such as semi-erotic cries and passages in foreign languages are incorporated in a way that simply sounds random rather than multifarious as intended. Fortunately, the title track incorporates forceful vocals in a relatively successful way. The especially jagged rhythm guitar riff and apocalyptic string crisis motifs add to the waves of energy emanating from this track.

There are a few more cinematically inclined tracks later in the album. "Truth Be Told", for instance, opens with a relatively soothing soundscape featuring vocals and electronic beats. Following sudden introduction of an epic string motif, the track intensifies into a high-octane beatfest. It's very memorable and poignant. "Crimson Phoenix" is another action-packed beatfest, but creates a movie-like feel of the end being near with its orchestral overtones, poignant samples, and uplifting chord progressions. It would have been desirable for a few more tracks on the album to exhibit such a personal mood in order to add variety and stop the aggression from becoming overbearing. Afterwards, the Arabian-influenced techno tracks "Winds of Sand" and "Steel Run" gets the tempos racing for the last time. The arguably misplaced "Infiltrate This" subsequently provides a moody conclusion to the album with distorted espionage grooves against ambient synthscapes and gradual piano use.

Overall, 2 Days or Die was a promising debut for Tom Salta. It effectively demonstrated his relatively unique hybridised style and inclination to create tense, aggressive sounds. Despite this, the actual tracks on the album vary from being instant hits such as "Halfway Til Bliss" and "Truth Be Told" to being select tastes such as "The Ace, The Only" and "Get Rolled On". It's also relatively limited in terms of variety of mood and overall playtime. Fortunately, Salta is working on a successor that should be released within the next year or so. If he maintains the style and creates even more classic tracks, we'll be in for a winner.

'The Ace the Only' made its appearance in Project Gotham Racing 3 and MLB 2006 as an in game soundtrack. '2 Days or Die' as the opening title for Microsoft's Xbox racing game Rallisport Challenge. 'Halfway Till Bliss' was featured in Timeshift. Crackdown features the songs "Halfway Till Bliss" "The Ace The Only" "Rule The World" "Get Rolled On".
Album was composed by Том Салта and was released on March 23, 2004. Soundtrack consists of 10 tracks tracks with duration over about 40 minutes. Album was released by Persist Records.