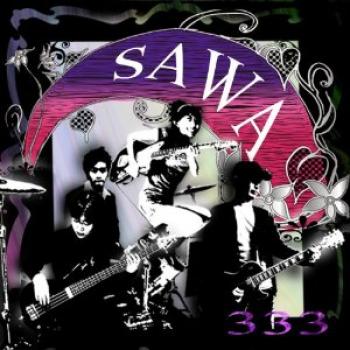 In 2009, vocalist SAWA made a brief, though bold step into the J-music scene with a formidable group. She teamed up with composer and guitarist HIZMI (aka Takeharu Ishimoto), bassist MAKI, and drummer MASA to produce a string of rock songs. 13 of these songs, together with some bonus remixes, were packaged together on their debut album 333.

The album begins strong with "Stay Away". A brief track (not even three minutes long), it is a emblematic of a great opening track for a rock album. Expect shredding guitars, stout bass performances, and the ginsu chops of on-point drum work. SAWA offers a powerful performance throughout and dances well between English and Japanese accentuation all throughout the album, creating some interesting linguistic sidesteps. The four here are in full force, and within the words here lie the ultimate irony.

For those who know of the pain of losing hold of a dear relationship, solace can be taken in "The Gloss." With lyrics such as "Our shadows won't link together" and "Now I'm just a broken leg in torn up jeans", there's an open air about the songwriting, which SAWA and HIZMI admit is a combo of real life experiences. While punchy and memorable, these lyrical meanderings don't necessarily make lexical sense; the band do in-house translation of the Japanese lyrics for this English album, and the mistakes you'll notice have been slammed by some critics. Yet with the abstract nature of the songs, such vocal mishmashes are endearing here.

In "BUSTED!", the team offers a brash, grunge-like backing assault, and SAWA captures a moment of versatility in the mid-guitar riff as she does a bit of hip-hop style vocal cadences and rants a la Zach de la Rocha from Rage Against the Machine. "Dragon" is another fast tune, sporting distortive aural effects that lightly flirt with Noise Rock and bring to mind the signature sound of Marilyn Manson. With the mad array however, there is a enchanting moment of piano keys tinkling about 2 minutes — melody mixed with the mania, so to speak.

As in the best of gestures, it's the little things which add to the overall charm and delight of the ever-changing SAWA sonic pantry. Within the sweet sounds of despondency which overlay "Doo" ("Save me, help me"), there's a catchy hand clap at the beginning, strangely relatable theme on the sudden onset of a paranoid mind. "Rouser" lives up to its name by tingling the listener's ear with a steady percussive strum that mimics a shootout scene in a spaghetti western. Vocally, SAWA escalates up to the hook's pinache, and the strumming sound returns.

Phantom like chants touch up the start of "Nowhere," with one of the most vivid atmospheres on what is already a quite diverse album. It goes everywhere, with a record scratch, a menacing electro-ambient beat, as well as a mix of HIZMI and SAWA's guitar play. While by this point, her voice is still fresh, a male vocalist here trades bars to add a complimentary effect to her delivery. An interesting fact is that the male voice is actually SAWA's voice with some digital modification. This track is the most indicative of things to come for the group overall.

On Track 10, the theme of "3" is taken to as you hear about three types of people in the world. Their scenarios each addressed in an intentionally cynical way, this solid piece of Aesop-like storytelling is the perfect grounding point of wisdom amidst a work of art filled with the jaunts and leaps of fantasy and unhindered imaginative meanderings. The already substantial album closes with a few bonus remixes, including an unplugged rendition of the opening track on the physical release.

These are but a few highlights on what is a standout release for a group that was sadly a victim of the evanescence of the music world. The band has since broken up, but its members are contributing to some outstanding projects all their own. Those that enjoy the sound of J-rock should check out samples for this album.