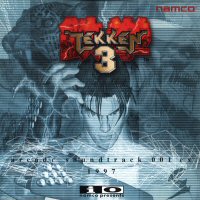 In March 1997, a classic in the line of fighting games arrived in the arcades: Tekken 3. The story is set 15 years after Tekken 2 and mainly revolves around Jin, son of Jun and Kazuya. On a quest for vengeance against a mystical entity called "Ogre", he enters the King of the Iron Fist Tournament 3. Contestants from all around the world meet up during the event to prove who is most worthy of the title. While Tekken 3 is not the most original game ever, what assured its success is that everything it did was done well (almost perfectly). It is still among the best rated games of all time today. As great as a game can be rated by critics, its music usually don't weigh a lot in the final score, so is all the hype appliable to the soundtrack too or was it dispensable?

Some of the best attributes of Tekken 3 were that it was spectacular, sophisticated, and cool. The same can be said of its music actually. It sounded great a decade ago and it aged very well, still up with today's standards. Indeed, the sound production is fabulous, deep and clean. As with most fighting game soundtracks, the music is very upbeat and energetic. It mixes many elements of rock, electronic, and funk. There is also a lot of sound manipulations, which acts as the main point of variation in many tracks. A quite modern urban vibe rises up from the album. While most compositions are between 3 and 4 minutes in length, not a lot of the durations are occupied with strong melodies. In fact, people whose standard of appreciation for music must include an elaborate melody might come short with Tekken 3. In-game, this goes more or less unoticed, yet when the music is listened to with care, one can find out it's rather pattern or motif oriented. Before going into details with the tracklist, it is worth mentioning that while the majority of tracks have a cool vibe overall, a number of compositions are a bit weak. No track is actually bad, but some are just ordinary or plain.

The main composer is Nobuyoshi Sano, responsible for 12 (+1 coop.) tracks out of 19. In general, he tends to use more electronic elements than his partner, Keiichi Okabe, but his tunes still rock. The attract demo theme is a good example, driven mostly by a guitar and drums. It features a lot of syncopation, which creates an unstable but punchy short track. Sano also wrote the character select music, which has a funky bass line and a repetitive, yet slightly catchy guitar riff, plus a siren-like synth effect that strengthens the urban attribute. His first character theme is for Paul Phoenix, the punk judoka. The electric guitar intro establishes a fitting "bad attitude" from the start, yet I find the rest of the track isn't intense enough to support the character as much as it could have. Forest Law's theme is a good piece, relatively light in mood yet a little wacky which is appropriate for the Bruce Lee-inspired fighter. An ultra sharp and catchy riff can be heard in the theme of Lei Wulong. However, I have heard it elsewhere as well (outside the game), and this makes me wonder if it's just a coincidence or if the music in Tekken 3 was "composed" in good part by "borrowing" samples? One way or another, that theme is still nice, although rather repetitive.

For King, the tempo goes down and a mix of rock and jazz fusion is introduced. Not what I would consider the best fighting track of the album, but it lightens up the listening experience by acting as a kind of interlude between more energetic tunes. As a matter of fact, the following theme, Yoshimitsu's, has a mean opening riff and is much heavier in mood, although compared to its counterpart from the PlayStation version, it lacks a bang and is somewhat boring. The cute Chinese girl Ling Xiaoyu received an appropriate theme, which begins with an innocent childish melody played by a flute-like synth, but it doesn't take long before the pretty-pretty atmosphere switches into something more mature and powerful, more threatening. Overall, the track is fairly light with flanged guitars and a bouncy bass line, and is one of the most enjoyable contribution of Sano. His remaining tracks, besides the short "Continue?" and "Game Over" cues, are the theme played when fighting against an hidden character, which is simple in composition with its hooky riff and high-pitched ethereal synths with some good drumming, and the theme of Ogre, the last boss, an unsettling track which starts as ambient electro / industrial and then some rather intense guitar riffing comes in along with strange scream-like synth pads and hypnotizing patterns. This music for the monster is well-accomplished and should interest fans of industrial music.

Keiichi Okabe was handled four characters to score. The first is Nina Williams, an enigmatic and dangerous assassin. I absolutely love her theme with its kind of "undercover in the city at night" mood, created by flanged drums and a slightly funky slap bass, enhanced by various suspenseful synth pads and echoing effects. While the energy level could have been higher, it still works decently in-game and makes a good listen outside of it without being disturbing. Following is Hwoarang, the Tae Kwon Do specialist, and his theme is suitably fast-paced and bouncy just like his wild kick moves. The bass and guitar are considerably funky, but the sound as a whole is filtered/muted, which cuts down the enjoyment factor a tad in my opinion. The composition was remixed for the PlayStation game and, once you've heard that one, you won't want to come back to this one. Eddy Gordo's theme is not really representative of the man, a rasta-haired capoeira fighter. One would expect something groovy, something highly danceable, but what was attributed to him musically is a mostly repetitive and forgettable rock track. It grooves some, but far from as much as the PSX version of it.

Fortunately, Okabe last character track is much more satisfying. Indeed, the protagonist of Tekken 3, Jin Kazama, has one of the most rockin' theme of all. Mostly based around a simple Led Zeppelin-esque riff, it moves its share of air (thanks to the groovy bass too). There is some light electronic effects, but it's essentially rock in style. Okabe also wrote the attract movie and staff roll music, which are short but they serve their purpose well. The latter reprises Jin's guitar riff is a slower, loose way. The last track not covered yet was actually co-composed by both Sano and Okabe and it's the theme of Heihachi. The first half is reminiscent of Okabe's style, standard rock with a slight groove, then at the half-mark, some crazy syncopation and synth effects are introduced, which are probably Sano's doings.

Tekken 3 is a legendary game and, while its soundtrack aspires to the same status, it falls a bit short of it. It is a good album of entangled rock and electronic music, usually energetic and with an urban vibe. The sound production is high, most tracks sound deep and clear, and it does not show any sign of age. With 19 tracks and a play time of 50 minutes, fans of fighting game music should find at least a few tracks that should become favorites, such as the themes of Forest Law, Nina Williams, Ling Xiaoyu, and Jin Kazama. However, I must stress that a number of tracks are ordinary, vacillating on the border of mediocrity. Additionally, people looking for elaborate melodies or eclectic music might be deceived since the tunes are mostly motif-based and similar one to the other. I would recommend the album to the PlayStation version of Tekken 3 over this one if you can only pick one of the two since it features more tracks, new and better music (or remixes of certain arcade themes), and is just much more consistent overall. Alas, both albums are now out of print, so it might be a little tricky to get your hands on them.

Album was composed by B.K.O / Нобуёси Сано and was released on July 18, 1997. Soundtrack consists of tracks with duration over about 50 minutes. Album was released by Wonder Spirits.

Notice, YouTube gives you opportunity to freely listen to this album. Absolutely legal. Without violations.