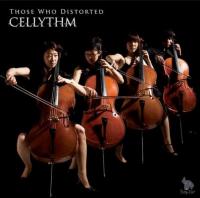 Since its inception, Nobuo Uematsu's record label Dog Ear Records has become known for its off-the-wall ideas. In addition to diversifying Nobuo Uematsu's career with surprising jazz, rock, and anime scores, they have pioneered experimental productions like Keita Egusa's Turkish piano mini-album Kalaycilar, Ian Hartley's breakbeat album Monkey Breaks, and, most controversially, the trippy arranged album Final Fantasy Remix. Cellythm - Those Who Distorted might possibly be the most bizarre of all their productions. It is a mini-album featuring an unusual ensemble, a 'cello quartet, performing unlikely source material, namely a crazy mixture of Final Fantasy battle themes, Elgar's marches, and classic rock songs. Nobody would have believed me had I conceived this album as an April Fool's joke mocking Final Fantasy's discography, but in fact this album is very real. The album hasn't been a commercial success so far, as anyone would have predicted, though there are still a minority out there waiting for a review on whether it might just be worthwhile in spite of the concept. So here it is...!

The album features three arrangements of Final Fantasy battle themes previously performed at The Black Mages' third concert. Final Fantasy VII's "Those Who Fight Further" opens the album on a somewhat worrisome note. So much of the arrangement seems to focus on low-pitched marcato strings that try to recreate the aggression and briskness of the original, but end up sounding elephantine. The sections where the lead 'cello is performing in the alto register are generally enjoyable given Kazumi Ando emphasises just what beautiful tones the instrument can make. However, the overall arrangement seems misguided with some parts sounding too abruptly sectioned and others without a clear focus at all. It's all too clear that 'cello quartets were never intended to perform Final Fantasy rock pieces here. Final Fantasy VI's "Battle Theme" suits the ensemble a little better given the ensemble can assert the perplexing nature of some of its Arabian-inspired chord progressions. However, it once again seems to be the lead 'cello that is producing stomachable tones and the development lacks many intricacies or elaborations.

Of all the entries on the album, Cellythm seems to capture the abstract tone of Led Zepellin's "Immigrant Song" the best. The lead 'cello captures much of the emotion of the original singer and offers some mesmerising glissandi and pitch bends. The staccato chords from the supporting 'celli recreate much of the grit of the original bass riff, though can sometimes feel too static or overly prominent. However, I was confused by the electric guitar solo in the second half of this brief rendition that seems totally out-of-place given the rest of the album. Although this is probably better than most string quartet versions of the over-arranged song, it still has nothing on the original. Although a predictable choice, the rendition of The Beatles' "Eleanor Rigby" is also acceptable. The resonant tones of the lead 'celli seems better suited for interpreting the sorrowful melody than the overly whiny vocals of the original. There are also refreshing deviations from the original material in the introduction and improvisation passages that keeps things from being formulaic.

The arrangement of Final Fantasy V's "Clash on the Big Bridge" saves the best Final Fantasy rendition to last. This arrangement maintains most of the direction and energy of the original while portraying it in a different colour. The lead cellist once again impresses with his firm performance of the melody and expressive solos. The interesting introduction, chromatic shifts, and sweeping countermelodies ensure the pace is maintained and a dramatic arch is established. The closing arrangement of the British nationalistic composition "Land of Hope and Glory" is less convincing. While the renditions of the main melody have a suitably proud tone, the jagged accompaniment is a disruptive influence rather than a support. The jazz improvisation is well done on this arrangement, but feels out of place and left me wishing that Cellythm instead created their own dedicated jazz composition instead. There are sometimes elegant renditions of the classically-oriented passagework from the original, but the arrangement never quite achieves the direction or emotion needed for it to feel like a grand finale.

Cellythm - Those Who Distorted is evidently a flawed album. This was almost inevitable given the abstract concept of the album and that the chosen material is largely incompatible with 'cello quartet. For the most part, Cellythm prove competent and versatile performers with the lead cellist being particularly expressive and technically competent. However, the arrangements are often quite weak, featuring too much emphasis on marcato strings, rambling or inappropriate development sections, and unpleasant timbres. Some of the arrangements, such as "Clash on the Big Bridge", "Immigrant Song", and "Eleanor Rigby", capture much of what was good about the originals and present them in an interesting new context. However, no arrangements are more enjoyable than their originals and most only offer novelty rather than musical value. Even excusing these flaws, this album isn't likely to attract many fans given the divergent choices of original material and the obscureness of the 'cello quartet as an ensemble. Furthermore, there are just three Final Fantasy arrangements and, while only somewhat overpriced, the mini-album is hardly a wholesome experience. This album is for hardcore or oddball collectors only.