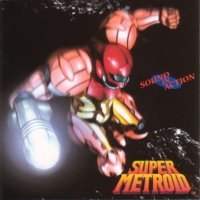 I was drawn to the music of Super Metroid when I first played the game, and I was determined to get a soundtrack album of the game. With Super Metroid -Sound in Action-, I didn't just receive the soundtrack for this game, but also the original Metroid and some arranged tracks.

This CD starts with four arranged tunes from Super Metroid, wonderfully performed on synthesized instruments. I love those tracks a lot, especially the ending theme because it stays true to the original composition but sounds even more powerful with updated instruments. Following that awesome track is the finale from the original Metroid for the NES. I had never heard this tune before. It was not as impressive as the finale from Super Metroid, but it was still memorable, featuring funky instruments and a bouncy, good-natured melody.

The next tracks that follow are all the soundtrack tracks from the original Metroid for the NES. The tracks are awesome in composition, but they suffer in many ways. First of all, they are very low-grade and are distorted in some areas. Second, they have different kinds of instruments than the NES cartridge version. Third, two tracks sound like someone plugged in their stereo A/V cables to the Famicom and starting recording while they played. For example, track 13's melody, which is heart-pounding and exciting, is drowned out by an annoying alarm sound that makes me want to cover my ears. Finally, at the beginning of the tracks, there is one momentary "step" noise, which is incredibly annoying every time I hear it. Otherwise, the tracks are OK.

The last 24 tracks are all of the OSVs from Super Metroid. The tracks are excellent in composition and sound quality, but there are still complaints I have to make. I remember that the tunes in the game were much longer and more complex than they are on the CD. Most tracks are cut short. Plus, some tracks just end abruptly, which is a scary surprise.

Despite some presentation problems, the release is a great album. If you want a soundtrack to the classic Metroid titles, this CD is for you. But be warned, there are some tracks in here that are just painful to listen to.

Album was composed by Hirou Tanaka / Кэндзи Ямамото / Минако Хамано and was released on June 22, 1994. Soundtrack consists of tracks with duration over about 60 minutes. Album was released by Sony Records.