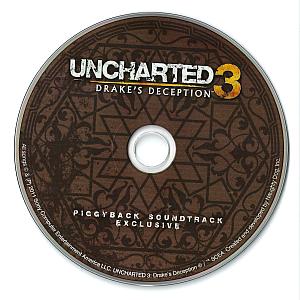 After winning a pair of BAFTA awards (and a host of other accolades) for his scoring of Among Thieves, Greg Edmonson was brought back to score Drake's Deception in a new studio across the Atlantic with a new team of musicians. Switching from the mountains of the Himalayas to the deserts of Yemen as the backdrop for the action, Edmonson does an impressive job of adding new ethnic elements into the score which somehow remains faithful to its two predecessors. The soundtrack was released in three forms: a short promotional release through Piggyback, a full-length digital release through Sony, and an extended two disc album through La-La Land Records. This review refers to the promotional release.

"Nate's Theme" returns to begin the soundtrack and although it is more or less unaltered from its earlier incarnations with its swelling, triumphant horn melody and tribal percussion backbeat, it is more polished and developed this time around. As an opening piece, this sets the tone of the album perfectly: the music you'll hear is undeniably Uncharted, but it will be interpreted through a different lens this time. While portraying the treasure that Drake seeks, "Atlantis of the Sands" also exposes the Middle Eastern influence of the soundtrack, mixing dashing orchestration with traditional instruments.

As for the rest of the release, it focuses on material from the game that wasn't included in the main digital release. Some tracks further explore the Middle Eastern influence of the soundtrack, for example "The Streets of Yemen" . Others throw Drake into the heat of the action, notably the rhythmically compelling "Courtyard Chaos" and horror-influenced "Arachnophobia".

Interestingly, there are a few complete exclusives here, namely "RPGeez", "The Getaway", and "Make the Call". I'm not sure why they weren't included in the full soundtrack, especially the former — which features so many twists, turns, and incredible rhythms during its five minute playtime that it emerges as an excellent adventure theme. However, the overall selection of just eleven tracks is quite limiting overall and, even without a few of these tracks, the full release is more wholesome.

As an increasing number of Triple A games rely on derivative action soundtracks full of quasi-Latin vocals and metal pipe noises, the scores of the Uncharted series stand apart for their challenging orchestral arrangements and implementation of ethnic musical intricacies. Uncharted 3: Drake's Deception is an absolutely solid soundtrack that delivers cinematic tension, evocative ethnic elements, and a sound that innovates upon the previous two offerings in the Uncharted series and is one soundtrack that will not disappoint the most discriminating of game music enthusiasts. That said, while a welcome exclusive through Piggyback, this promotional edition is only a brief reflection of what the score has to offer. 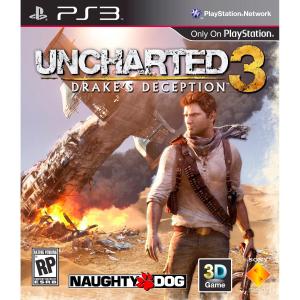