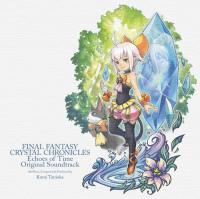 Final Fantasy Crystal Chronicles Echoes of Time was a joint Wii and DS multiplayer action game. Having scored previous titles in the Crystal Chronicles series often to much acclaim, Kumi Tanioka returned for Echoes of Time to offer a two disc soundtrack. In places, she offered an exotic new direction inspired by South American instruments in order to characterise the influences of an ancient Inca world. Aside the main theme, however, the majority of the soundtrack revisits the renaissance and organic styles featured in the original Crystal Chronicles. Thanks to the efforts of synthesizer operator Yasuhiro Yamanaka, the various woodwinds and percussion she used do so sound beautiful. In addition, she revisited aspects of her musicality from Ring of Fates and even ported over several themes from that game. It's obvious that Kumi Tanioka worked hard to produce an emotional and fitting soundtrack, but she struggled to offer much creative given this was her fourth Crystal Chronicles project. Is this soundtrack a worthwhile listen?

The "Main Theme" of Echoes of Time hints at a exotic new direction for the series. It features several jubilant flute melodies presented above rustic guitar lines and bustling congas. The actual melody isn't as well-defined as other main themes in the series, likely due to its irregular phrasing and somewhat clumsy initial idea. Nonetheless, by incorporating evocative guitar solos, more lyrical passages, and even a serene conclusion, the theme develops into a colourful and enjoyable introduction to the soundtrack. This type of sound is scarce elsewhere in the score, but nevertheless revisited a few times. Decisive boss battles are made all the more memorable with the dynamic blends of renaissance and exotic instrumentation featured in "Boss Type B". The main theme is also directly reprised in "To the Adventure". While its use is intended to be iconic in the game, it actually sounds utterly unremarkable since the theme is looped and stripped of its development. Its treatment in an acoustic guitar duet at the finale makes the most of the melody and the late addition of some flute interpretations is also beautiful.

Kumi Tanioka's lyrical side shines in many of the pieces of the soundtrack. "Life in the Village" is a good example of a piece that manages to be simple yet captivating. It features a memorable melody from a playful renaissance flute in conjunction with low-key guitar backing. In contrast, "Forest" revisits the highly successful approach of Final Fantasy Crystal Chronicles's "Departure"; blending wistful flute melodies and percussive cross-rhythms, the piece slowly gains emotional intensity. "Forest of Bygone Days" is a surprising reprise of this theme with a faster pace and more upbeat motifs. Exploring the settings further, "Ice Mountain" and "Flame Mountain" are interlinked themes that also feature gorgeous woodwind writing and off-kilter accompaniments; however, the accompaniment tends to more interwoven in these tracks and creates a more earthy feel. "Desert Ruins" uses instrumentation in a rather similar way, but builds up steadily upon an ostinato and enters several secondary passages. It's constructed in much the same way as Final Fantasy XI's serene setting themes.

The orchestral approach of Ring of Fates is largely rejected in Echoes of Time, but one feature that has been reused are the string bass motifs. It seems that, when Tanioka wants to create a driving sound, she'll integrate a prominent string bass in an efficient manner — whether to give a sense of endurance on the flute-based "Road" theme, convey raw power in the otherwise bagpipe-infused normal boss theme, or create build-ups in cinematically inspired "The Bridge Leading to the Tower". However, her dense strings also drowns out the otherwise beautiful wind meanderings of "At the End of a Long Time" and prevent the ritualistic features of "Tower" from being truly distinguished. There are nevertheless a few more creative darker tracks on the soundtrack. The timbral colour of the soundtrack is enhanced with the use of urgent guitar passages on "Ancient Library", ancient reed drones on "Graveyard", and meandering piano interludes on "The Mines". The "Last Battle" theme is also interesting since it blends dramatic chorus use, slow-building tuned percussion motifs, and eccentric wind infusions in a way reminiscent of Xenogears's "One Who Bares Fangs at God".

It is clear from most other pieces that Tanioka lost much of her inspiration on the soundtrack. Cinematic themes such as "In the Beginning", "Ancient Bridge", and "Blessing" manage to develop dramatically, but their core elements are thin and derivative. "Eternal History" was intended to inspire imagery of an epic legend, but is actually very dull background music. It is nothing other than some derivative chants and the occasional chime above an endless string drone. Renaissance music ought to be simple, but not this transparent. The secondary theme "Memories Tomorrow" aspires to the feathery sound of Nobuo Uematsu's sentimental themes, but is little more than predictable chime figures and serene suspended strings. The melody works better in "Sherlotta", but the compositions reemphasises just how formulaic the use of woodwind melodies and string bass are throughout the soundtrack. Probably the worst themes on the soundtrack are "Echoes of Time", "Crystal Core", and "Coming-of-Age Ceremony". These revolve around the repetition of the same staggered one bar figures on, yet again, tuned percussion.

A number of multiplayer themes from Ring of Fates were nevertheless reused in Echoes of Time. All the themes from "Character Creation" to "Platform" were directly ported over except with extended track times and different names. It's always delightful to hear compositions like the rambunctious "Second Quest Together!", slapstick "Shopping", and formidable "Galdes Battle". These reprises will remind one of the days when Crystal Chronicles still sounded fresh and refined. However, their inclusion will be a waste of money for those who already own the Final Fantasy Crystal Chronicles Ring of Fates Original Soundtrack. The unreleased, albeit mediocre, soundtrack to Final Fantasy Crystal Chronicles: My Life as a King could have been comfortably included instead. The last two tracks on the soundtrack are still worthy bonus remixes. Underground artist the3rdmimi transforms the short but sour "Coming-of-Age" into a fully fledged chiptune remix featuring a complex array of rhythms and pretty melodic infusions. Yusuke Saito also offers a jazz quartet arrangement of "Desert Ruins" that features fresh writing for each instrument.

The Final Fantasy Crystal Chronicles Echoes of Time Original Soundtrack is a serviceable accompaniment to a spinoff game. It blends influences from the original Crystal Chronicles or its sequel Ring of Fates, though isn't as creative or refined as either of them. The main problem with the soundtrack is that it uses instrumentation, phrasing, and other musical features in a very formulaic way. There are simply way too many themes featuring, for instance, a flute melody used in a serene, playful, or wistful way while the opportunity to develop the South American sound was large missed. Although there are a few memorable highlights, the weak main theme and sloppy secondary themes ensure there is relatively little worth revisiting here. Most of the finest themes were taken directly from Ring of Fates so they are hardly a unique selling point. In my opinion, Kumi Tanioka has offered about as much fresh as she for the Crystal Chronicles series and would be better off focusing on creating new orchestra, rock, or electronic scores for other titles. It is a relief that another composer, Hidenori Iwasaki, is scoring The Crystal Bearers and seems willing to make a few bold moves. It's not a bad soundtrack overall, but most can safely skip it outside the game.

Album was composed by Куми Таниока and was released on February 18, 2009. Soundtrack consists of 51 tracks tracks with duration over . Album was released by Square Enix.