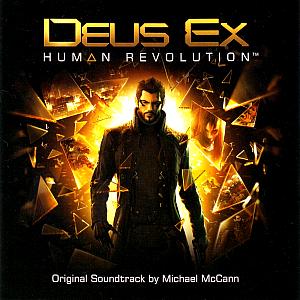 The first Deus Ex game, released back in 2000, was hailed as an instant classic and one of the best computer games of the decade. As so often, the inevitable sequel — in this case called Deus Ex: Invisible War — was somewhat of a letdown and seemed to stop the burgeoning franchise dead in its tracks. But of course, that's no reason for a business-minded publisher to let a once established property lie dormant. And so, seven years later, Deus Ex: Human Revolution continues the cyperpunk saga under Square Enix. Or to be more precise, it tells its prologue, as Human Revolution? turned out to be a prequel to Deus Ex. The game was greeted with strong reviews, but only time will tell if it will be as fondly remembered as the original.

While Deux Ex composer Alexander Brandon had returned for the sequel, he wouldn't be involved in Human Revolution, nor would his co-composer Todd Simmons. Instead, electronic musician Michael McCann was brought on board to score Human Revolution, with his biggest gaming-related credit to date being his soundtrack for Tom Clancy's Splinter Cell: Double Agent. McCann approach for Human Revolution certainly didn't lack ambition, as his aim was to mirror the theme around which the whole game evolved: 'transhumanism', in McCann's words "the use of technology to push humanity beyond our physical and mental limitations". According to McCann, this "definite struggle between the natural and the technological" would be represented in his score through "the duality between acoustic and electronic instrumentation", with both sides "always fighting for priority". At first, these ambitions only found a limited outlet when Human Revolution's soundtrack hit stores as a 29-minute bonus disc of the game's special editions. Three months later, the game's music was graced with a much more generous 67-minute release in both physical and digital form. This review refers to the expanded release.

'Transhumanism' might sound like a lofty term, but McCann finds some intriguing ways to give the concept a shape that's both emotionally and intellectually satisfying. The foundation of the score is its electronic side, whose stylistic trademarks will be familiar to anybody who's heard the music for a cyperpunk-themed game or film (yes, think Vangelis and Blade Runner). Cue glacial synth layers that still seem to be the quickest way to musically convey an urban, not-too-distant future. You'll hear measured, sometimes majestic melodies which through their detached demeanour underline man's struggle to not vanish in the glass-and-steel jungle of a megalopolis. The resulting melancholy that characterises "Main Menu" is combined on "Opening Credit" and "And Away We Go" with equally familiar-sounding soft electronic pulses and string ostinati which provide some some forward motion. Of course, these technology-minded rhythmic devices reach back to scoring conventions for futuristic movie soundtracks, most recently Tron Legacy. The results on "Opening Credits" and "And Away We Go" are predictable but atmospheric enough, due to the tracks' pleasing harmonies and subdued but infectious beats.

While the bonus disc release mostly focused on these exercises in chilly mood-setting, this expanded album includes a much greater number of beat-driven tracks that prevent the soundtrack from wallowing too much in future-noir introspection. Again, such pounding electronic rhythms are part and parcel of futuristic scores, but Human Revolution mixes in an admirable variety of beats and develops them nicely within each track. There's no monotony on action-laden cues like "First and Last", "Detroit Marketplace" and "Hengsha Daylight (Part 1)", which all segue from a quieter, moody start into explosive waves of rhythms. The diverse origin and nature of these pushy beats is one of the things that keeps the album powering along nicely during its extended running time: there's the drum 'n' bass pulse of "After the Crash", the gritty dissonances of "Detroit Markeplace" and the sweaty, yet suave suave club beats of "The Hive". And McCann has more tricks up his sleeve than using rhythmic elements to just drive up the listeners' pulse. The first half of "After the Crash" jots stark live percussion fragments in the mix and combines them with ritualistic male chants that give the music the feeling of a religious ceremony.

The well-conceived balance and tension between more languid and energetic pieces in the album's sequencing is mirrored by the different elements at work in the soundtrack at large, giving expression to McCann's conceptualisation of 'transhumanism'. The realm of technology, represented by icy synth soundscapes and electronic beats, is contrasted with various acoustic elements. The sphere of the natural is predominantly expressed through that most human of instruments: voices, mostly in the shape of a solo alto. It's an effective choice by McCann to convey the struggle at the heart of the score, and how the natural and technological constantly intertwine, since both solo and choral voices on Human Revolution are subjected to a number of digital manipulations — extensive application of reverb, processed vocals on "The Hive" and "Harvesters", and the addition of what sounds like artifical vibrato on "Hengsha Daylight (Part 1)". The alto melodies usually convey the same mood as the futuristic synth washes: solemn and dejected. Their use not a revolutionary concept, and the alto lines on Human Revolution will have you mentally reaching for most any film score that has Lisa Gerrard involved. But ultimately, the mix of electronic elements and slow, unperturbed vocal lines works a treat and gives the music an emotional resonance and impact they would be missing otherwise.

This contrast yields its strongest results on opening piece "Icarus - Main Theme". It's doubtlessly one of 2011's catchiest — if hardly most complex — Western game compositions. An opening alto solo exposes secondary motif in expectedly portentous fashion, before the track starts building over pulsating beats and stomping industrial rhythms. The music's momentum first culminates in the exposition of the four-note main theme by the alto, and then leads to a similarly soaring, if simple synth melody that caps off this cyperpunk anthem in glorious fashion. One of the more subtle references to transhumanism on "Icarus – Main Theme" aren't the interspersed female vocals, but the fact that the piece's escalating development resembles Icarus' ascendence towards the sun — and one of the symbols used in Human Revolution for the conflict between humanity and technology is indeed the myth of Icarus and Daedalus. And then there's of course the fact that the main theme emphatically rises skywards on the last note. The composition also highlights how most of the time, acoustic and electronic elements don't so much combat each other on Human Revolution, but instead interact and enhance each other; a fitting analogy for the idea of mechanical augmentations that have been created to increase the human body's capacities.

One of the bonus disc album's shortcomings was that it didn't give a more precise idea how extensively McCann relied on his serene main theme to shape the score. Judging by this longer album, not much. The main theme only reappears on "First and Last", where it's contrasted in inspired fashion with the thumping rhythms, and on "Endings", which layers its female solo voices with vocal melodies floating in the background, distilling the score's often ethereal nature into its most spiritual and introspective manifestation. At least the main theme's use on "Endings" provides some closure as the composition ends the album with the same material that had also opened it. "Main Menu" presents the triumphant synth melody from "Icarus - Main Theme" in intriguingly disjointed form, slowly forming like a planetoid inside a glowing nebulae. And the opening motif of the main theme appears around the midway mark on "First and Last". Still, beyond these dispersed occasions, Human Revolution's thematic potential goes unused, which is even more of a shame considering how memorable its main theme is. Fortunately, that's the only significant complaint one can level at the soundtrack.

The inclusion of vocals also benefits lesser tracks like "LIMB Clinic" and "Detroit City Ambient Part 1" by adding some much-needed emotionality to the cues' downcast and rather unremarkable synth ambiance. The alto's ethereal strains even manage to partially salvage "Hung Hua Brothel (Extended)", one of the more hamfisted cues on the album with its sleazy beats and moaning female voice samples. But there's still more to discover. One of the most frustrating aspects of Human Revolution's bonus disc release was that it seemed to undersell McCann's conceptualisation of 'transhumanism' by reducing the 'human/natural' side of the equation to effective, if well-worn alto melodies. This more complete release rectifies this problem and presents a fuller view of McCann's plans. A drum kit is heard on "Detroit Marketplace" and "After the Crash" animated passages. Male vocals that sometimes evoke the spirituality of a sufi's chant make their appearance on "Detroit Marketplace" and "Hengsha Daylight (Part 1)" and turn enticingly enigmatic through creative processing on "Harvesters". An amorphous cello melody floats through the ether on "Home" and articulates the other slow compositions' melancholy through different means.

Another outlet for the music's acoustic side are the East-Asian instruments heard on several cues such as "Lower Hengsha Ambient Part 1", "Return To Hengsha" and "Harvesters". In interviews, McCann elaborated on his use of source recordings of traditional Asian music, which he would then blend into each other and incorporate into the score. This further reinforces the idea of 'transhumanism' through the process of "incorporating very traditional forms of music but using technology to manipulate, tune, and merge them into an electronic world." The results are most striking on "Lower Hengsha Ambient Part 1", which enrichens its oppressive synth backdrop with a smattering of ethnic musical snippets. These bits and pieces pop up as quickly as they vanish, which gives a music a nervous energy that acts as a counterpoint to the more rigidly organised electronic elements of the score. "Return To Hengsha" and "Hengsha Daylight (Part One)" use the same exotic ingredients in the context of an action track to satisfying results.

Listening to the Deus Ex -Human Revolution- Original Soundtrack after having heard its earlier bonus disc release is a very satisfying experience. Now we get a much more fully-fledged idea of the future McCann is painting with his compositions: a technology-driven, shadowy, multi-cultural world in search of its own humanity. McCann's idea of 'transhumanism' is well-developed throughout the soundtrack's extended running time: the familiar, but skillfully implemented synth melodies and beats are complemented by a satisfying variety of acoustic elements which in turn are frequently digitally altered. Other soundtracks have already used most of these 'natural' sounds to depict a future-noir world, but Human Revolution's austere alto melodies, throbbing drum rhythms and East-Asian instruments still give the music colour beyond melancholic moodiness and energetic beats. It's certainly not as high-brow in the implementation of its underlying concept as, let's say, Bioshock and the music could have made a lot more use of its crowd-pleasing main theme. However, Human Revolution remains strongly recommended for everybody who was hoping that the music of Deus Ex would return to the heights of the original game's score.

Sounds like Ambient, Electronica, Region - that's what we can say about this album. Tracks preview provided by iTunes. If you like Deus Ex: Human Revolution Original Soundtrack, we strongly recommend to buy it. Support composers, artists and performers so they can release more music in the future. Prices and shops where you can buy it are at the right column. Notice, Deezer gives you opportunity to freely listen to this album. Absolutely legal. Without violations.