Hanii in the Sky Soundtrack 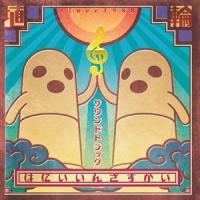 Originally released in 1988, Hanii in the Sky was one of the first top down vertically scrolling shmups. Composed mainly by Ako Matsudaira, with a sole contribution from, Kenichi Iwanaga, it offered a different atmosphere from the shmups of today. SuperSweep published a tribute album for the game at the beginning of the year featuring both the original soundtrack and a complete rearranged version. The arrangements were handled by Shinji Hosoe, Ayako Saso, Masashi Yano, Hiroto Saito, Kazuhiro Kobayashi, and even Ako Matsudaira. Is it worth picking up?

While the original soundtrack is quite pleasant, featuring beautiful and sinister soundscapes, I think of it more as a bonus on this soundtrack with a greater focus on the arrange pieces. Ako Matsudaira does a fantastic job at conveying the atmosphere of the game through her original compositions. It's also really great to see that an individual track was dedicated to each piece of the album after the medley-based approach of its lacklustre predecessor, Hanii² Game Music ~Sky & Road~. However, I find the arrange tracks to be much more enjoyable.

Despite being absent from the game music scene these days, Matsudaira surprisingly offers two arrangements. The first, "Diamond Rhapsody," is a beautiful, orchestral take on the original, with sweeping strings and brass, peaceful woodwinds, and plucked harp. It doesn't really arrange the original too much, but it really does evolve it into something more modern. Matsudaira's other arrangement, entitled "Wings of Determination," is a vocal arrangement of "Welcome! Hanii". The vocalist, Yozora Orihime, contributes to quite a few vocal arrangements on the album; however, Matsudaira's is easily my favorite of the vocal themes. It's got this groovy sound to it with some beautiful synth and string passages and reminds me a bit of a 70's disco song in style.

SuperSweep alumnus Masashi Yano contributes a single arrangement of "Hiroko's Dance". This is an orchestral interpretation of the original and it serves to accentuate the sinisterness of the original though its string usage. As with the original, it keeps in a melodic fragment of "Welcome! Hanii" to tie together the main theme. It's a very interesting take, but one that is extremely engaging. Another sole contributor, Kazuhiro Kobayashi, offers an arrangement of "Set My Wings on Fire". This is a pretty interesting electronica arrangement that incorporates a vocal line, at times distorted, and a fantastic beat that sounds more electropop in sound. It's a nice way to end the album.

Speaking of "Set My Wings on Fire," Ayako Saso offers a vocal arrangement of it as well, entitled "Hide and Seek". It features a pretty static dance beat with a lot of synth additions in the melody to help keep things fairly fresh. My favorite part of the theme, however, is the section where only Orihime's voice, piano, and some soft synth is used. It serves as a nice interlude from the dance heavy beats. Saso's other arrangement, "For the Gloomy God," takes Iwanaga's only contribution, and transforms it into an interesting orchestral arrangement. For the most part, the theme is very peaceful, featuring beautiful string and woodwind passages over a nice techno beat, that really help give it a sense of flying. However, in addition to this floating atmosphere, sometime during the middle of the arrangement, she trades in that bouncy feeling for something much more sinister. The B section is filled with a flurry of string work that features a fantastic melody and harmony. It's probably my favorite arrangement on the entire soundtrack.

Shinji Hosoe also offers two arrangements. His instrumental arrangement, "Hotsuka's Song," is an interesting blend of crystalline synth lines and more playful, and slightly chaotic, melodies. There are also some sinister interludes thrown in, that focus more on ambience and dramatic brass-like distortions. At others, there is more peaceful string like synth passages that offer a sense of calm. His vocal arrangement of "In a Shallow Dream," entitled "Stairway to a Dream," features an extremely bouncy atmosphere. It's almost saccharine sweet, but it offers a pretty engaging listen. There are some diverse synth effects interspersed throughout the arrangement and the percussion work is pretty interesting, giving it a slightly Calypso feel.

Lastly, Hiroto Saitoh offers some pretty good arrangements as well. "Altar of Hesitation," a take on "Altar of Dreams," is probably my second favorite vocal theme. It combines an engaging electronica beat with some beautiful synth and woodwind passages, giving a spacey, yet down-to earth and somewhat Asian-inspired feel. One of my favorite parts of this vocal theme has to the interlude that features some beautiful acoustic guitar and piano work. It's nothing fancy, but it is rather touching. His other arrangement, "Psychedelic Resolution," is all kinds of awesome. It has this jazzy, big band/Caribbean sound that definitely reminds me of the style heard in "Angel Island Zone" from Sonic the Hedgehog 3. The woodwind passages, combined with the funky beat, make for an entertaining fusion. In the end, this is another one of my favorites on the soundtrack.

The Hanii in the Sky Soundtrack is definitely something worth picking up. Between the original compositions and arrangements, there's definitely a ton of material worth checking out. While I'm fonder of the arrangements, the original music is also quite good and a must for fans of classic music. This is the first time that the original soundtrack has been broken down into separate tracks, as the only other prior release had it in one continuous piece. Next time you place an order at VGM World, do yourself a favor and pick this up.

Vocals on tracks 17, 19, 20, 23: Yozora Orihime
Lyrics: Nima
Album was composed by Ako Matsudaira / Kenichi Iwanaga and was released on January 14, 2009. Soundtrack consists of 24 tracks tracks with duration over . Album was released by SuperSweep Co. Ltd..