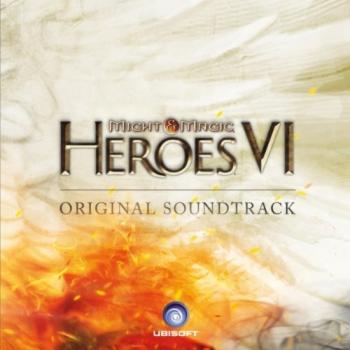 Like few other gaming franchises, the sound and music of the Heroes of Might and Magic series are synonymous with two names: Robert King and Paul Anthony Romero. Their return for Might & Magic Heroes VI was a simple given, but in a surprising move, they were teamed up with the largest roster of co-composers in the franchise's history. While King and Romero still handled the majority of tracks, prolific composing duo Cris Velasco and Sascha Dikicyan and high-profile game composers Jason Graves and Tom Salta were brought in to deliver additional pieces. And then there were a number of pieces by Sean Lorhish and Eric Chevalier (possibly aliases?), remixed by a certain Rick Knight. In pre-release interviews, the most prominently highlighted aspect of Might & Magic Heroes VI's score was the inclusion of Asian-sounding music, a stylistic trait that had already reared its head on Heroes of Might and Magic V: Tribes of the East and which would play a bigger role on this new album. The large team of composers created around 150 minutes of original music, although their contributions differed vastly in scope — Salta only wrote one short introductory cue of about 80 seconds. Even more curiously, while all of Graves' relatively few compositions made it on the 70-minute soundtrack album, none of Velasco's and Dikicyan's pieces were included. Marking a first for the venerable franchise, Might and Magic Heroes VI received a dedicated soundtrack release via online music stores, as well as being released as a bonus item of the game's European collector's edition. Both versions share the same content.

With a whopping six creative heads being involved in this soundtrack, does the result turn out to be a cohesive one? It does indeed, and while Might & Magic Heroes VI is far from perfect, it's one of the more varied Heroes of Might and Magic scores. Long-time fans of the franchise will mourn the disappearance of the series' trademark operatic soli, but otherwise, Might & Magic Heroes VI still has a lot to offer. There's a significant world music — in this case Asian — influence on several pieces, while other cues have a more ambient drift that's carried over from Heroes of Might and Magic V. As on that earlier score, there's a good number of forceful battle tracks on here, which fortunately are performed by the same orchestral forces as the rest of the soundtrack. And while Might & Magic Heroes VI doesn't return to the gushing melodicism of earlier series entries, it still puts more emphasis on melodic content than its predecessor through a number of lyric compositions. Their orchestral constructs are more predictable and less dense than those of series highlights, the second and third Heroes titles, but they still feature in the top tier of fantasy game score compositions.

Not surprisingly, one of the most important sources of this diversity are the contrasting artistic sensibilities of the artists involved. Graves, coming off his earlier 2011 success with the excellent Dead Space 2, manages to fit his more modernistic approach into the required fantasy template while maintaining a distinctive voice. As a result, his pieces showcase a starker approach that nicely contrasts with King and Romero's traditionally more rhapsodic pieces and which enriches the score's character without sounding out of place. The raw character of Grave's contributions greatly contributes to the album's earthy, autumnal character that holds the score together and sets it apart from other Heroes of Might and Magic scores. Grave's modus operandi yields its most striking results when applied to the album's ethnic elements — particularly in comparison with how King and Romero handle these sounds. The latter two composers make heavy use of various East Asian instruments on "Sanctuary" and "Fighting the Waves". But while both artists create some intricate and colourful textures, they also plunder many sounds that have come to be associated with generically Chinese/Japanese music, to the degree that both pieces feel clichéd, if competently assembled. On the other hand, Graves' ethnic compositions "The Jungles of Hashima" and "The Tide Rises" opt for a more abstract approach that yields more individualistic and interesting results. Jagged ethnic flute calls fill the ominous, wide open soundscape of "The Jungles of Hashima", before the piece further emphasises its exotic qualities tastefully through the inclusion of hand percussion fragments and chimes. "The Tide Rises" convinces through similar restraint in its first half as it builds over nothing more than intensifying hand percussion rhythms, eerie woodwind figures and a string crisis motif. Unfortunately, this delicate balance is upset later when a generic three-note brass motif gives the music a touch of cheap Hollywood action music.

Speaking of action music: the franchise's battle tracks have never been its highlight, but Might & Magic Heroes VI finally breaks with that tradition, at least to a degree. Again, kudos to Graves, who churns out what are maybe the series' two best action cues, "The Second Eclipse" and "The Dragon Knight". The violence of the compositions' rhythms and percussion hits is reminiscent of Dead Space's action music and just as impressive. While "The Second Eclipse" goes for a more barren sound with its harsh percussion layers and shrill brass figures, "The Dragon Knight" pulls all the stops and adds massive choir layers to an already bombast, unforgiving orchestral background. Coupled with a truly majestic vocal melody and an unrelenting sense of grandeur, "The Dragon Knight" is easily the score's highlight and compares favourably with the amassed orchestral and choral grandiosity of Garry Schyman's Dante's Inferno. However, the score's other battle tracks are a more mixed bag. "The Archangel" is comprised of almost the exact same ingredients as "The Dragon Knight", minus that piece's forward drive and melodies that gave its counterpart's bombast some direction. Without these elements, it impresses through the sheer force of its sonic assault, but ultimately feels monotonous and overwrought. "Stronghold" features a beautiful flute melody lead among its marching sounds, but its potential is wasted by a lack of development that sees the melody repeated over and over again. Sean Lorhish and Eric Chevalier's two contributions "Heroic Battle" and "Fateful Battle" are about as creative as their titles suggest, but are they're still decent battle tunes that develop sufficiently, even though you'd be hard pressed to remember them once the album's over.

Long-time franchise fans had reason to be disappointed by the rather elusive nature of Heroes of Might and Magic V's melodies, which often appeared only in the form of shorter fragments, rather than as the gorgeous melody lines of earlier franchise titles. As mentioned, Might and Magic Heroes VI redresses that balance somewhat through the inclusion of some memorable, expansive tunes. Again, Graves delivers one of the album's highlights with "Haven", and although it won't bring you to tears like Heroes of Might and Magic IV's similarly-titled piece, it's still a marvellous piece in its own right. Not quite as otherworldly as previous Haven cues in the franchise to keep in tune with the soundtrack's more down-to-earth character, its life-affirming flute melody and passage for full choir are beautifully anchored by some light hand percussion and acoustic guitar rhythms. King and Romero unearth some melodic treasures of their own, for example with the soaring, surprisingly catchy violin melody of "Flight of the Griffin (Theme of the Griffin Dynasty)" that indeed conveys the liberating sensation of gliding on wings over a majestic mountain range. Like the swooning violin melody on "Blood and Tears (Main Theme of Heroes VI)", it's not a particularly elaborate construct, but it'll stick in your head after the first listen.

Even better is the slightly demented, yet elegant and a touch decadent waltz in the second half of "Necropolis". Throughout their work on Might and Magic titles, King and Romero have always deployed waltz meters with winning results, and "Necropolis" is another superior entry in their catalogue that recalls Might and Magic VII: For Blood and Honour's darkly seductive strains. "Autumn Is Coming" closes the album on a nostalgic and peaceful note that is most evident through the lilting two-note motif that is at the composition's core. And the inclusion of a solo piano piece ("Ghosts of the Past (Slava's Theme)") is not only a franchise first, but also charms through the cue's delicate atmosphere and subtle move from nocturnal brooding to cautious optimism halfway through.

Not all tracks that aim for melodic glory are winners though. The staggering contrast between the grandiose orchestration of "What's In a Name (Anton's Theme)" and the cue's extremely thin material is almost unintentionally funny. The Arabian touches on "The Vale of Heres" that have been so intoxicating on previous Might and Magic scores are buried under overbearing, bass-heavy string orchestrations. "The Flower of the North (Sveltana's Theme)" opens with a nicely flowing, luxurious string melody and segues into another piano solo, but the piece is too short to fully realise its components' potential. Another area in which ambitions go unrealised on Might and Magic: Heroes VI is thematic structure. While there are more than enough tracks on this album with the word "theme" — or even "main theme" — in the title, at least on this soundtrack album there's no material that is being reworked or at least reprised. Mind you, as lovely as that supposed main theme on "Blood and Tears (Main Theme of Heroes VI)" is, it's predictable four-square progression and simplistic nature don't make it a prime candidate to carry the score anyway. Then again, no one's ever listened to the Heroes of Might and Magic scores for their thematic structures, so the lack of recurring motifs is on par for the franchise and not necessarily a problem.

One area where Might & Magic Heroes VI improves upon its predecessor are its more ambient tracks, which were a bit patchy previously. Here, they are of more consistent quality. And while they retain their floaty character, this time around the compositions make better use of instrumental resources and elicit more colourful, shifting layers from the orchestra. "The Abyss" and "The Alchemy of Grief (Anastasya's Theme)" show that King and Romero haven't lost their talent for creating strongly evocative and atmospheric pieces. And what's more, "The Alchemy of Grief (Anastasya's Theme)" and "Songs of Innocence and Experience (Kiril's Theme)" feature the Heroes of Might and Magic series' signature solo instrument, the alto saxophone. Fans of the franchise will welcome this link to the games' impressive musical heritage, while newcomers will be surprised how much character this atypical (for a fantasy score) instrument adds to "The Alchemy of Grief (Anastasya's Theme)" through its sultry, mournful sound that combines splendidly with the cue's chromatic string lines.

The days when the Heroes of Might and Magic franchise produced cutting-edge soundtracks are probably over, but that doesn't mean that there's not a lot to discover on Might & Magic Heroes VI. It's a varied, yet cohesive fantasy score that will easily please fans of the genre with its earthy, warm sound, atmospheric location tracks and a bunch of rousing battle tracks that might be a franchise best. The decision to bring new composers to the series turns out to be a wise one, as Jason Graves adds some intriguing new facets to the world of Might and Magic through his modernistic approach. There's a sufficient number of strong melodies on the album and the score is more consistent than Heroes of Might and Magic V, but at the same time largely lacks that soundtrack's individual highlights.

The quality of the compositions on Might & Magic Heroes VI remains inconsistent though, with a significant number of pieces that are solid, but not hugely interesting, or weaker still, due to insufficient development, the hamfisted implementation of ethnic sounds, or insubstantial melodic material. All in all, it's not a return to the glory days of the second, third, and fourth games in the Heroes franchise, but taken on its own, Might & Magic Heroes VI is still a worthy entry into the franchise's rich canon. 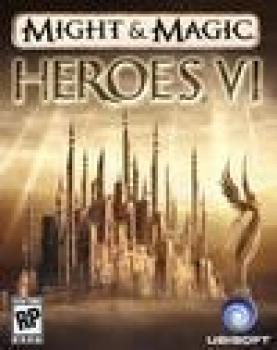