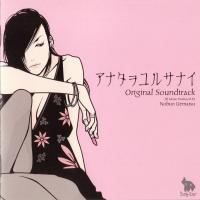 Anata o Yurusanai is one of Dog Ear Records' first published albums. Composed for a PSP game (although it's probably more appropriately called a sound novel) featuring a female detective, it features compositions by Nobuo Uematsu himself as well as some collaborators in a jazz and bossa-nova style. Given this fresh take of music from Uematsu, how does he do in comparison to his collaborators?

Sadly, this album is extremely unmemorable. A lot of the tracks seem to share a similar style in composition. The jazz is taken to the extreme in a lot of the collaborator's works. To be honest, though, I don't think there is a single collaborator's original composition that I enjoy. Given this soundtrack had quite a few jazz musicians, perhaps this wasn't the best medium for me to be introduced to their work, but at the same time, had I heard their work beforehand, I might have been even more disappointed than I already am. However, it really doesn't get much better for Uematsu either. Aside from "Toneless" and "You from a Distance" and its few incarnations, most of it sounds lifeless, even if they are fast-paced.

Perhaps my biggest gripe with the soundtrack is that a lot of the music is extremely repetitive. There is little variety between the tracks, and even if it does feature a change of pace every once in a while, it reverts back to something that sounds like a previous track. "Attention!" and "Collision", for instance, seem to share this very piano-focused jazz basis, but end up being very monotonous. Although I'm not the biggest jazz listener, I don't think that all jazz sounds the same. On a more positive note, at least some of the soundscapes produced are pretty decent and only suffer from the idea of repetition or sameness.

Moving on to what I consider the good part of the soundtrack, the vocal themes, we get a much better listening experience. "Toneless" is a very pleasant vocal theme. The jazzy percussion and piano that makes up the majority of the track is complimented nicely by the woodwinds. However, the addition of an electric guitar in the middle really helps to heighten the overall sound and adds a nice flavor uncommon to a lot of jazz into the experience. The vocalist, YVONNE, isn't the greatest, but her voice does seem to fit the music, even if it does sound a bit flat at times. Overall, very fitting for the female detective theme.

"You from a Distance" is the strongest track on the album. Once again, Uematsu proves he is a very capable vocal theme composer and redeems, in my eyes, his efforts in Blue Dragon. It's such a peaceful composition, led mainly by piano, acoustic guitar, and harmonica. YVONNE's voice in this one is much better than in "Toneless", but at times, still a little flat. The atmosphere produced in this vocal theme is quite quaint. The harmonica solos, the piano harmonies, and percussion just seem to blend extremely well together. Layer in some strings and you have a piece you just can't pass up.

As much as I wanted to like this album, I just couldn't. There really wasn't anything at all worth my time, aside from "Toneless," and "You from a Distance". Those vocal themes really made me happy, especially since one starts off the album and one ends the album. It's a shame that the middle had to be pretty boring. In the end, if you like this album from either playing the game, or are just a fan of what you heard, I suggest buying it. Otherwise, it's definitely going to be money ill-spent.

The PSP's Anata o Yurusanai is a vertical text-based detective game released only in Japan. Given the detective theme, dated setting, and female protagonist, the game's producers decided that a jazz and bossa-nova soundtrack was appropriate. Nobuo Uematsu was promoted the lead composer of the title and provided musical direction for the title. However, jazz musicians L. Gallardo, Keith Freeman, and Kimio Itoyama composed the majority of the themes here and also arranged Uematsu's nine works. The focus of the production was adding to the mood of the game rather than producing a melodically memorable soundtrack like most of Uematsu's prior works. This was no easy task — although its stylistic focus sounds fitting in theory, in practice it could have come across cheesy or aseptic. Fortunately, the music seems to fit the game excellently and Uematsu was sufficiently proud of it to make it the subject of the first release by his label Dog Ear Records. How does it fare on a stand-alone basis?

Uematsu opens the soundtrack with one of his most atmospheric vocal themes to date, "Toneless". Soft descending piano chords, hazy synth, and low-key acoustic bass and drum kit set the scene. The smokey, expressive, and fragile voice of YVONNE perfectly symbolises the character of the female detective, melancholic in the verse, elated in the chorus. Courtesy of Kimio Itoyama, the electric guitar and flute solos in the middle and end top off the piece gorgeously. Uematsu also contributes the contemplative main theme "You From a Distance". The opening version is introduced with a firmly developed but lightly harmonised one minute piano solo. The warm tones of the piano ensure the subsequent exposition of the melody is memorable and, while clichéd, the eventual addition of suspended strings and woodwind solos adds to the sentimentality. "You From a Distance" is reprised at the end of the soundtrack on a solo acoustic guitar against gentle synthy accompaniment. To breathtakingly conclude the soundtrack, YVONNE also sings a ballad arrangement of the theme in conjunction with piano, acoustic guitar, and harmonica.

The other Uematsu tracks often have his fingerprints all over them despite their unusual stylistic focus and the involvement of arrangers. "Life is Like Fried Eggs" punctuates playful xylophone melodies and soothing flute passages with a 'feel good' bossa-nova beat. "Bossa de Drive" is similarly composed, though quite a bit more laid-back. These pieces superficially resemble elevator music, but are nevertheless charming given the personality and spirit of Uematsu contained prominently within. One of the most creative efforts is "Shadow Scat", which intersynchs female scat singing centred on a jovial melody and gentle trumpet secondary melodies, both supported by excellently recorded accompanying forces. Towards the end of the album, solo piano work in "Short Night" contrasts comforting but fragile melodies with mysterious arpeggios and cold dissonance. The closing instrumental theme "Promise" is sentimental and personal, wrapping up the character's journey with gentle tuned percussion, warm clarinet lines, and dabs of soft strings.

In addition to their arrangements, Keith Freeman and Kimio Itoyama contribute five tracks each. Freeman's softer piece range from the smooth saxophone-infused "Deep Inside Me" to the contemplative solo piano piece "The End". However, he also contributes "Attention!", where walking bass supports bold piano chords, and "Only One Step from Danger", a groovy funk track filled with uncertainty. "Between Lie and Truth", in contrast, maintains dynamism in its harmonies while also offering soothing melodies oddly reminiscent of Final Fantasy X-2's "Zanarkand". Itoyama contributes some of the stranger pieces in the soundtrack. "Madness" blends eerie electronic elements and acoustic bass work to produce a horrifying minute of music while "Time to Know the Truth" layers various forces, including a voice sample, on ethereal tuned percussion and suspended synth pads. Even "Legwork", a catchy bossa-nova piece, enters an abstract second section. Itoyama's strongest contributions are "Brand New Today", where gentle bossa-nova rhythms support an accomplished saxophone performance, and "Waltz to the Labyrinth", reminiscent of all those jazz arrangements of Erik Satie's Gymnopédies.

Moving on to L. Gallardo's tracks, "Memories of Fescue" complements the opening version of "You From a Distance" to provide a warm and reflective piano-focused introduction to the soundtrack. "Collision" combines brisk string bass motifs, fascinating percussion cross-rhythms, and catchy synth and piano lines to create a fun and individualistic action piece. Another experimental piece is "Jean and his Family", which utilises an ensemble of woodwind instruments in a minimalistic way to create a plodding but meditative sound. L. Gallardo demonstrates his capacity to create memorable laid-back melodies further in "The Office is a Kindergarten" and "Unallowed Person", the latter a particular highlight here, while a welcome saxophone adds to the usual mix of jazz instruments in "And Then...". Briefly considering the remaining contributors, Whogon's "Decision of a Reasoned Child" and "SAKAMOTO!" are brief rhythmically focused espionage pieces. More of a highlight is F.N.R's "Hunting", an unpredictable assembly of various out-of-synch beats and motifs with an interesting piano solo before the loop.

The Anata o Yurusunai Original Soundtrack is a refreshingly different addition to Nobuo Uematsu's discography. It's wonderful to see that he is embracing his freelance status by engaging in small creative projects like this in addition to large works such as Lost Odyssey and Super Smash Bros. Brawl. The single greatest strength of this soundtrack is how it excellently fits the mood of the game due to the old jazz style, lounge vocal tracks, and mixture of emotional, atmospheric, and action compositions. The solid compositions and arrangements by external jazz musicians Kimio Itoyama, Keith Freeman, and L. Gallardo ensure the soundtrack is sophisticated and refined at all times, despite the tendencies to be derivative. For those looking for an especially memorable Uematsu soundtrack, only the vocal themes will probably offer what you're after. For those looking for something completely different, this soundtrack might be for you.