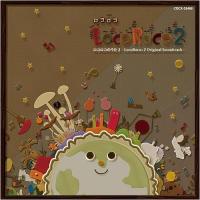 I was very excited to hear there was a second LocoRoco soundtrack coming out to review. It's composed and performed by the same people as last time, Nobuyuki Shimizu and Kemmei Adachi. The soundtrack is very much an integral part of the gameplay as you collect music notes, play mini games, or change the LocoRoco you are playing as in-game, all factors that enhance and change the music as you roll along through the game. If you haven't played the game, then it's like listening to a soundtrack from a musical you've never seen and this applies much more to this album than the original LocoRoco soundtrack. You obviously won't be getting the same experience just listening, but there are still a few great compositions that'll get stuck in your head. Sadly enough, at first glance the LocoRoco 2 Original Soundtrack seemed to consist of much remixing, recycling, and enhancing. Could all of this use of old material possibly be for the better?

If you didn't already hear, then you should know that this soundtrack is sung in a completely fictional language, which is appropriately called "LocoRoco Language". This a full-fledged "language" that sounds just amazing when sung. The album consists of several different singers who each represent a color of LocoRoco from the game. The "Mui Mui" sing any tracks that the LocoRoco don't sing or back up the LocoRoco with their helium filled voices. The same singers as last time are kept for this new album, but there is an introduction to a single new LocoRoco.

The new purple LocoRoco is one of the big highlights of this album. In the game, she has sort of a tomboy personality (seemingly thrown as an extra female contrast to the pink LocoRoco). This personality reflects in her music, even if a bit tamely, and her voice certainly is a fine contrast to the pink LocoRoco's. She gets her own theme, "Arten Daffu", which has kind of an light 80's rock feel to it. I enjoyed this song and also cherished it since it was the only new theme song of this album. I think this track would have benefited greatly from shifting dynamics into the chorus. Because of the lack of dynamics, it sounds a little flat. It's still a fun and catchy song in general that you definitely couldn't find in your average video game soundtrack.

Traveling back to the beginning of the album, we can find another highlight. "Theme of LocoRoco 2" is a full original composition and also sets a familiar but new tone to this album. You'll hear even more high pitch voices and honking horns. It becomes a little too silly after a while, but I think the Mui Mui shine more than ever in the catchy emotional chorus of this song. It is true that the extra silly gags are setting a newer tone for this album. Some songs just reek of silly, like "MuiMui King", which is just a bunch of people repeating the word "MuiMui" in funny voices for two and a half minutes and nothing else. There are also many "Movie Tracks" which are short and too event focused to be listened to on their own, though none of them are annoying or anything like that.

As I mentioned before, there is a lot of recycling going on especially with instrumentals. You'll hear tracks like "Chuppa Chuppa" again, but completely unchanged. Some music is enhanced and remixed, though. "Moinoi Moinoi", for instance, has definitely been enhanced into a fuller composition but it's still not worth listening to outside of the game. I was disappointed to hear that the finale song was virtually unchanged. "Etoule Pucoratte 2" is, as the name implies, a sequel song. The original impressed me and I was hoping to be impressed again. The only difference is that they threw Purple in to sing and that's all. The track "LocoRoco's Song" was also very recycled, but it was undoubtedly fun to hear everyone sing this song together which I expected them to do in the last game. One last recycled highlight is the "LocoRoco Medley", which gives a taste of what a lot of the previous album was like. I would have liked to hear a bit more of this style on the LocoRoco 2 soundtrack.

Music is such an integral part of this game that you should just buy the game for the music before getting the album. If you're not a fan, then imagine this album as listening to a soundtrack from a musical you've never seen. There's also an overload of recycling and silliness that bring this album down a bit, but some original highlights definitely match the first LocoRoco's charm. Even if you don't like this music or haven't played the game, I dare you to listen to this album and then not get at least one or two songs stuck in your head afterwards.

Album was composed by Кэммэй Адати / Нобуюки Симидзу and was released on February 18, 2009. Soundtrack consists of 41 tracks tracks with duration over more than hour. Album was released by Columbia Music Entertainment.