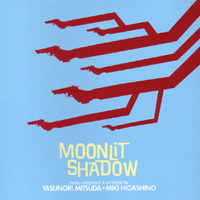 One of Yasunori Mitsuda's most unedxpected contributions to the video game music industry is Moonlit Shadow, which is one of five major works he was involved in over 2004. It is very different to all his other scores in several ways, however. First, Mitsuda was joined by Miki Higashino, famous for the composition of Konami's Suikoden series, who composed half of the tracks here. This makes the score very diverse and two distinct styles are evident due to this. Second, the score adopts a jazz feel throughout and also features experimentation with electronica and rap, giving the score a very different feel from Mitsuda's typical Celtic and symphonic scores. Further, the whole score is performed by a band of jazz instrumentalists and vocalists; while most of Mitsuda's post-Chrono Trigger scores featured at least one live performer, his others tend to feature a lot of synthesized music, too. Clearly, this score was to be an innovative joint effort from Mitsuda and Higashino, so let's move on and see whether it was a largely successful one.

The "Opening Theme" immediately reflects that Mitsuda knows how to work in a jazz style. The composition has an authentic big band sound and the band really knows how to groove in style. The horns and the saxophone really take the spotlight, being the loudest and the most "in your face" instruments on the track, while the rhythm parts are also tight. Now I'm not a big jazz fan, but this piece is really gets your blood moving and your head grooving. It also adds a unique feel to the start of the game. With "D.O.L.L.", Mitsuda offers another strong jazz number that just screans fun. Before I say anything else, I must comment on the absolutely awesome base line, which is so idiosyncratic and perfectly timed. The saxophone solo is very catchy too and adds to the exuberant feel.

Higashino's "Red Shot" is unique to the Moonlit Shadow album because it is both chaotic in nature yet very controlled. The track starts of smoothly like any other track on the album and the band creates plenty of energy. I love the part at around the three quarters of the way through because it sounds very chaotic and has some clever cacophony scattered around in it. Proving less consistent than her partner, less impressive is "Striking Distance". It has some good features about it, such as its electronica beat, but most of the time it is extremely boring with the main melody being less than memorable. I think the problem with this track is the fact that it is extremely underdeveloped and it also seems to be quite rushed. But luckily the track is short, so you don't have to put up with it for more than 3 minutes.

"Cool Sky" is different to the previous tracks. Not only is it jazz arranged in a chillout style, but it also incorporates a bit of electronica, which I believe is a first in Yasunori Mitsuda's career. The trumpet and the flute are the main instruments here acting very 'chilled out', playing smoothly over the electronica beats. You can certainly imagine a clear and cool sky when you listen to this track, but it is far from tedious either. "Urban Fantasy" is another really relaxing track by Mitsuda, but it is plain boring and slightly mixed up. It seems like Mitsuda wanted it to be a smooth jazz but it turned out to be reggae-inspired with a dash of chillout and a whip of sadness. Frankly, the only good thing about this track is the reggae beat, but even this sounds out of place.

"Joni Scott Club" really sounds like a dim lit club with a single fan rotating slowly and gangsters playing cards while smoking. Higashino does well to succeed creating this, even lowering the volume to make it sound like a private club. It's very smooth but sadly not very interesting as it is repetitive and sometimes can be quite dull. Fitting is what best describes this track, but sadly it isn't much more. Just imagine a car chase while listening to "The Maximum High Speed". This track successfully incorporates an acid jazz style and you can definitely groove to it. However, it's fairly average in its compositions and it can be a bit tedious at some points. The best example of this is on the 1:16 mark where the trumpet repeats the same note for about 10 seconds in a cacophonic manner. A select taste for sure.

"Smooth Blues" is exactly what the title suggests. It's a very smooth and laid-back piece with a few twists and some wiggy lyrics that barely make any sense. Indeed, not only does this track have great solos but it also has a rapper that does a fine job at expressing Higashino's music. In Higashino's "Junk! Junk! Junk!," the same rapper from "Smooth Blues" returns to 'bring down da house' with his extremely weird lyrics and unconventional yet good style. Unlike "Smooth Blues," the rapper takes a much more major role, rapping through most of the piece. The percussion is also an odd choice as it sounds like a man blowing a raspberry down a pipe while hitting a drum kit with his feet. The piece portrays the imagery of a midnight city with a few people walking down the street. It's a great smooth hit by Higashino which equals "Red Shot" as her best on the album.

Mitsuda usually does a good job at making dark or sinister tracks and "An Illegal Messenger" is among those other good tracks. Once again, Mitsuda uses an electronica beat to start with that works wonders to add a certain dark eerie feeling to the scene. It then progresses further, adding on more instruments as the track continues. Afterwards, it suddenly evolves into a fast paced danger piece with an incredibly fast beat. And if you thought that it was it, you're wrong; a distorted electric guitar comes out of nowhere and sums up the piece before it repeats. It's another great inspired jazz hit by Yasunori Mitsuda and the band. Intensifying the last portion of the album, "Target" is full of mystery, from the distorted drum beats in the intro to the full band ending. Despite the ambient tone, the trumpets in the piece are very catchy and work well with the xylophone and the rhythm. "One Note Blues" is another hit from Higashino. It sounds more bluesy with its saxophone and trumpet use, and a further standout is the carefully timed rock organ use.

Now "Hit Man" is tight! It's a great jazz piece by Mitsuda that seems to be inspired by previous tracks composed by the artist.It has the ability to 'zap' your imagination and let's you think about this mysterious hit man. The trumpet solos are the highlight in this track as they are smooth, inspired, and memorable. Once again, Mitsuda uses an electronic beat for part of the track which works well as it adds a feeling of mystery to the atmosphere. However, certainly Mitsuda's best on the album is "Jungle City". It has that smooth jazzy city feeling that I love and with the percussion, it really sounds wild and full of energy. This is an awesome piece that contains some 'ubertastic' drum and percussion solos while still keeping the jazzy feeling. It also seems our little rapping friend from "Junk! Junk! Junk!" and "Smooth Blues" decided to pop up towards the end of the track and do a short little rap which has absolutely no or little reason.

Paired side-by-side with Mitsuda's hit, Higashino's climactic "Asian Kung-Fu Foundation" is truly a jazz masterpiece. It blends a touch of ferociousness with more than a dash of funkiness into one very compelling experience. Everything works exceptionally well in this track, from the bongos to the electric guitar. Another nifty and very effective idea she used was the idea of a female rapping while her voice in a heavily distorted way. It's Higashino's best on the album. After the magnificent previous energetic tracks, we get a lovely piano and trumpet duet, "Blue Moon". The piano in this track is really flowing, divine, and sad, whereas the trumpet represents hope, passion, and desire. They both mean different things yet blend in so well together that it's painfully sad to listen to. I feel like it is constructed well, but could also be more developed. "Au Revoir Dans la Nuit de Clair de Lune" thereafter is very full on. It takes bits and pieces from previous tracks and integrates them one grand (but short) piece. It's a good and solid instrumental that ends the instrumental tracks on a high note.

Mitsuda's final piece is a very surprising vocal theme. He decided to choose Mayuko Karasawa, a vocalist who specializes in Baroque music, to perform the track. The theme is very short, getting straight to the main point, and sounds similar to "Creid" from the Xenogears Creid except without instruments. The piece would borders the empty feeling because of the lack of instrumentation, but Karasawa's voice makes up brilliantly for this. It is haunting if transient gem. Higashino's vocal piece therefore falls a little short. It's a lot longer than Mitsuda's piece and it has instruments supporting the vocalist, but it is rather derivative in style. Higashino decided to do a jazz piece consisting of a piano and a drum kit here and chose a lounge vocalist by the name of Kaoru Yuki here. The final piece sounds like Norihiko Hibino's "Can't Say Goodbye to Yesterday" from Metal Gear Solid 2: Sons of Liberty, except less jazzy and not quite as elaborate.

What an album! The two styles are so different and so unique that you could easily pick out what tracks Mitsuda wrote and what tracks Higashino wrote. It is clear that Mitsuda has more experience, especially after doing Chrono Trigger: The Brink of Time, and his strong pieces belong among his classics from RPG scores. I have a few opinions about Higashino's jazz. Although it's fresh and inspiring, some of her tracks are a little dull whereas others prove amazing. But the real problem with this album is the fact that not many people who listen to VGM like jazz, therefore, many people would not be very thrilled with Moonlit Shadow. It is even more damaging that people who disliked the Chrono Trigger arranged album would avoid this album altogether. But those who don't fear should take a venture into the new realm of Mitsuda and Higashino and buy their album. It may be a bit different to what they both usually compose, but it's a refreshing change of pace and style.

Album was composed by Мики Хигасино / Ясунори Мицуда and was released on February 23, 2005. Soundtrack consists of tracks with duration over more than hour. Album was released by Sleigh Bells.