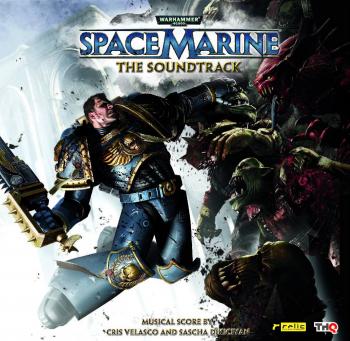 It's getting crowded in the rampantly popular genre of third-person shooters that star very manly space marines and their oversized weapons. And the field only got more packed when developer Relic Entertainment decided to move the Warhammer 40,000 franchise firmly into the third-person shooter realm, after the previous Warhammer 40,000 title, Dawn of War II, had already mixed real-time strategy and shooter elements. No wonder then that in some quarters, Warhammer 40,000: Space Marine was jokingly dubbed Gears of Warhammer. Admittedly though, actually one of the first places where the 'grizzled space marine' cliché emerged were the Warhammer 40,000 tabletop games back in the 1980s, so Space Marine — despite its wildly generic title — can't be accused too hard of a lack of originality.

For the game's soundtrack, Relic Entertainment hired the prolific composing team of Cris Velasco and Sascha Dikicyan, who had last roamed sci-fi terrain with Tron Legacy and Mass Effect 2: Kasumi's Stolen Memory. The massive scope of the Warhammer 40,000 universe would require a score of different dimensions than these latest efforts though. In press releases, Velasco and Dikicyan echoed this sentiment by stating that Space Marine was their "most cinematic score yet" that would "involve the player emotionally more than anything else" and that their work "pushes the series forward with a bold and fresh sound." Score collectors were first given the chance to verify these claims through a soundtrack bonus disc that came with the Collector's Edition of Space Marine. A commercial release of the soundtrack would follow only a few weeks later from Sumthing Else Music Works, containing the same music as the bonus disc.

The soundtrack album for Space Marine creates an odd experience. Going into the Space Marine score album, you'd have good reason to assume that it would land pretty close to Gears of War. The first track "Prologue" seems to confirm this, with its ominous opening that predictably mixes ponderous orchestral and and electronic instruments performing in their lower registers. And yes, the whole thing ends with a march. But at 1:40, an unexpectedly dignified solo violin melody that's laced with an agonised undercurrent breaks the stylistic mould of tension-setting opening pieces for these militaristic sci-fi shooters.

It turns out to be a hint at the surprising emotionality of "Against All Odds" and "Prelude to War" that's soon to follow. Uplifting, sometimes even majestic, violin melodies are given enough space to take flight and to paint images of grand adventure in broad brushstrokes, while still leaving space for lyrical interludes. These melodies are full-bodied enough to not contradict the score's generally militaristic tone, but instead they enhance its breadth and impact. It's true that the melodic writing on these cues — and on the album as a whole — can be a bit amorphous and non-descript. But it's still leaps and bounds ahead of Gears of War 2 and other recent scores with similar orchestrations and a fondness for slow tempi like The Witcher 2. The melodies on Space Marine are further made interesting by the decent amount of counterpoint that accompanies them on these beautiful, even impressive pieces. The album's second track, "Titus' Theme", is equally string-heavy, but features more self-serious material than "Against All Odds" and "Prelude to War" and feels more restricted in its emotional expression. The 'theme' that this cue presents is a three-note figure that's hardly memorable and doesn't return through Space Marine in any recognisable way. In fact, there are next to no thematic elements worthy of mention on Space Marine, a trait that's prevalent on all Warhammer score albums to date. But beyond these shortcomings, "Titus' Theme" has still just enough substance to carry off its air of presumptuousness.

It's a pity then that almost right after these tracks, Space Marine goes into autopilot and delivers a constant stream of typically muscular action tracks that are certainly anything but "bold and fresh". It's all standard stuff: heavy percussion (including taiko drums) that dominates the music to varying degrees and that impresses through sheer volume rather than interesting rhythms or timbres. Add some deep string ostinati, swelling brass chords and basic "epic" chord progressions for either violins or French horns and trombones, and it's done. This hackneyed approach would be more excusable if it actually yielded impressive results, but it rarely does. Only "Valkyrie Run" brims with the energy that a good action track needs, and although the composition is constructed almost exclusively around decisive string ostinati and rhythms, these are layered intricately enough too never sound monotonous. The orchestral recording commendably reproduces these layers of rhythmic energy with sufficient clarity. But none of the other, usually more lumbering battle cues reach the same level of sophistication. And through their lack of development they are mainly sound and fury that doesn't signify a lot.

Mind you, it's not nearly as mind-numbing as Dawn of War II's never-ending barrage of battle sounds — Space Marine's textures are more transparent and the album's sound is more organic. And ultimately, Space Marine's battle cues are certainly functional and palatable when served in relatively brief portions as on this album. But there's not much that differentiates one action track from the next and the pieces just don't have much impact. Flashes of inspiration like the polyrhythmic brass fanfares at 0:52 into "Fight for Honor" and the brief inclusion of a piano on the same cue remain ephemeral details that aren't expanded upon. Often enough, as on "The Meat Grinder", "Heart of Darkness", and "Titan", the music briefly returns to the soaring string expressions of the album's first few tracks. But the contrast between militaristic bombast and emotional melodies that Velasco and Dikicyan aim for is undermined by the the fact that the stereotypic string material on these cues feels like a dumbed-down version of the melodic strains of "Against All Odds" and "Prelude to War".

Another way the action tracks on Space Marine try to gain character is through the injection of dissonances and synth effects, which as on Crysis 2 score the game's alien characters, in this case the Forces of Chaos. These elements are either sandwiched between the booming orchestral sounds ("Battlements") or take centre stage during more extended, quieter passages on "The Weirdboy" and "Legions of Chaos". They add colour to the drab orchestral palette, but are generic in their sounds and application and usually don't provide more than slightly unsettling ambient music — just like the string dissonances and glissandi on "The Inquisitor" don't amount to much more than uneasy mood music. And when the synths are included to accompany some of the score's romantic string melodies, they feel actively out of place. These electronic sounds end up faring best on "Whispers of the Dead", which consists of an entirely synthesised soundscape that's predictably eerie and spectral, but atmospheric enough, particularly when it tumbles into cresendoing aleatoric chaos in its last third. Ultimately though, the synth sounds and dissonances associated with the Forces of Chaos aren't prevalent enough on Space Marine's score album to establish a sufficiently strong musical identity for the Forces of Chaos. And don't expect the Orcs — the game's other baddies — to receive thematic or timbral signifiers. And no, pounding war drums don't count, as they're simply the rhythmic bed of every action cue on Space Marine and through their use are never characteristic of anything but grizzly combat.

It's worth mentioning that the album ends on a relatively strong note with "Heresy" and "A Hero's Legacy". The first track successfully enhances its 'alien' ambient mood with disembodied voices that float through the ether in chromatic harmonies. The string melody that kicks in later is again simplistic, but still pleasing enough. And closing track "A Hero's Legacy" does a good job at bringing together all the stylistic traits that have characterised Space Marine and develops them satisfyingly over the track's extended running time. The track not only ends with a suitably big finale, but also includes previously unheard elements like the two solo violins after 1:00 that perform intertwining, chromatic melodies to create some introspective moments of remembrance in surprisingly non-melodramatic fashion.

Well, the good news is that Warhammer 40,000: Space Marine is the best Warhammer game score to date, slightly edging out Jeremy Soule's Warhammer 40,000: Dawn of War. But that doesn't mean that Space Marine is an unqualified winner. Too much of the album consists of action cues that are as loud as they are stereotypical, with all the chopping string rhythms and thunderous percussion we've come to expect, but without much direction or personality. Of these compositions, only "Valkyrie Run" sticks out with its sense of propulsive energy, while the other action tracks are functional and competently composed, but not much more. The orchestrations on Space Marine are predictably heavy on the orchestra's lower registers, and the synth flourishes and dissonances that score one of the game's alien races don't achieve a huge amount either. There are signs of inspiration here and there — like the solo violin(s) on "Prologue" and "A Hero's Legacy" — but often enough they remain details, squashed by the militaristic orchestral sounds.

Space Marine is at its best when it gives into its melodic side and lets the strings play their expansive, beautiful melodies on "Against All Odds" and "Prelude to War". It's during these moments — and almost exclusively during these — that Dikicyan and Velasco realise their ambition to involve the listener emotionally. And while certainly romantic in style, these cues also retain the necessary grandeur for a game taking place in the huge Warhammer universe. Ultimately, Warhammer 40,000: Space Marine largely toes the party line with a bunch of predictably muscular, adequate action tracks, and is elevated out of mediocrity by a number of sweeping compositions that hint at the potential that after Space Marine still lies dormant and unrealised in this franchise.

Album was composed by Крис Веласко / Саша Дикисиян and was released on September 20, 2011. Soundtrack consists of 19 tracks tracks with duration over about 55 minutes. Album was released by Sumthing Else Music Works.