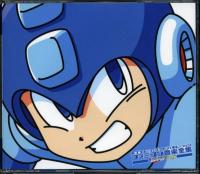 In the late 80s, the Blue Bomber graced Nintendo's first console, the Nintendo Entertainment System. Since then, he's been a force to be reckoned with. Always thwarting Dr. Wily, Rockman saves the world one game at a time. Although his encounters with Dr. Wily span only eight games, this collection of music recaps his first six adventures. How does the music fare for each of the games and is this compilation worth purchasing? Read on to find out.

The first adventure for Rockman is also the shortest. It sometimes set the standard for some of the repeat tracks found in most Rockman games. For example, "Game Start" has appeared in most Rockman games, and to an extent, Rockman X games, as the boss introduction music. The stage themes that go with Rockman's encounters with Dr. Wily's six cronies are a mixed bunch; since most of the chiptune era relied on a strong melodic focus, it's imperative to find a melody that really sticks with the listener but only some suffice in this respect. "Cutman Stage," "Elecman Stage," and "Bombman Stage" carry bubbly effective melodies that, in the end, rival some of Rockman 2's stage themes to a degree. While "Fireman Stage," "Iceman Stage," and "Gutsman Stage" are also nice, they are much weaker in terms of catching the listener's interest. The boss theme for this game is one of the better Rockman boss themes, despite being so short; the frenetic pace really seems to match the pace of the battles. Another boss theme, "Dr. Wily Stage Boss", is also very effective and brings with it a very energetic tune. The Dr. Wily Stage themes are very different from one another. "Dr. Wily Stage 1" is by far the better entry in this game; it gives the listener a sense of determination and boasts a very strong melody that sucks the player into the stage. "Dr. Wily Stage 2" sounds much more ominous, but at the same time, doesn't really offer much to the listener in terms of staying power; effective, but not entirely interesting. Rockman's first adventure marks a pretty effective soundtrack, with both fantastic and average contributions. Still, it is definitely worth a listen.

Rockman 2 signified a major change for the series. Starting from this game, Rockman encountered eight robots from Dr. Wily and a password system was introduced. It also raised the bar for the soundtracks to come as a whole. According to many fans, Rockman 2 is the ultimate Rockman listening experience and I'm going to agree with them as a hardcore fan myself. There is just so much improvement in this album. In my opinion, every single robot stage theme in this game is amazing, save for "Crashman Stage" that is good but nowhere near the caliber of the others. While everyone has their favorite, ranging from the bubbly "Bubbleman Stage" to the free flowing "Airman Stage," my favorite is easily "Metalman Stage"; there is just so much going on in this track from the infectious melody to the fantastic accompaniment. Of course, this brings us to the "Boss" music for this game. While I don't like it as much as the first Rockman game, it is still effective, even if it isn't as frenetic. There seems to be a pattern in the early Rockman games — "Dr. Wily Stage 1" is fantastic, while "Dr. Wily Stage 2" is not nearly as good — that seems to be maintained here. Heralded by many as the definitive Rockman composition, "Dr. Wily Stage 1" has captured the hearts of many with its fantastic melody, awesome pacing, and various chiptune effects. Out of the Dr. Wily Stages throughout the history of Rockman, I'll definitely say that this is my favorite. "Dr. Wily Stage 2" is another decent piece of music, but as before, offers a more ominous yet ultimately less captivating tone. Rockman 2 is by far the definitive soundtrack of the classsic series. There is a copious amount of fantastic tracks, muddled only by a few decent ones.

If I had to pick a second favorite album of this compilation, I'd have to say that Rockman 3 was it. While the stage themes aren't as strong as its predecessor, they are still consistent throughout. Out of the eight stage themes offered, "Magnetman Stage," "Snakeman Stage," and "Sparkman Stage" are clearly the strongest in terms of engaging melodies and the like. Each offers a nice sound and very different atmospheres. Whether it is the playful "Sparkman Stage" or the frantic "Snakeman Stage," there is something to keep the listener happy. Of the weaker links for stage themes, these dishonors goes to "Hardman Stage" and "Topman Stage." While the melodies due offer a different atmosphere, they just aren't as fun to listen to at all. It's a real shame, too, since I felt they had a lot of potential that was untapped. Unfortunately, I'm not the biggest fan of "Boss" from this album. Sure, it is much longer in length than the previous ones, but at the same time, it doesn't offer as engaging a battle. The "Dr. Wily Stage Boss" makes up for it with its ominous frantic atmosphere. Unfortunately, the Dr. Wily Stages in this game aren't that great. Sure, the first one fits with the pattern of the previous games where the first stage is always the best one, but it isn't nearly as engaging as either of its predecessors. In addition, this game also adds a third stage theme; it's very dark and foreboding, but it really doesn't appeal to me as much, though others may like it of course. Rockman 3 is a nice addition to the album. It's not as good as its immediate predecessor, but it still offers a nice experience.

I'm not going to lie. Rockman 4 is one of my least favorite soundtracks in this compilation. Save for "Ringman Stage," with its interesting progression, there aren't too many stage themes that capture my interest. The nice dark atmosphere of "Skullman Stage" makes it probably the third most enjoyable of the stage themes for me. Sadly, the "Boss" music, having an evil atmosphere, really lacks melodically and in a lot of other areas. Also nowhere near the calibre of predecessors is "Last Boss," which sounds definitive and heroic, but not too great otherwise. Of all the Dr. Cossack and Dr. Wily Stage Themes, only two really capture my interest. Those are, ironically, the second stage themes for each that offer some nice sounds and melodies. The other two really don't do much for me at all in terms of listening power. Sadly, for the most part, this album can be skipped.

If Rockman 4 was one of my least favorites in terms of soundtrack, Rockman 5 manages to surpass it for least favorite of them all. There are, sadly, only three tracks on this album that I really enjoy. One is "Starman Stage," which offers a really quirky and catchy melody; it definitely sounds spacey and that works to its advantage. "Dr. Wily Stage" is the other stage theme gem on this soundtrack. It offers one of the best melodies for a Dr. Wily Stage since Rockman 2 and the atmosphere adds a touch of heroism and intrigue to the mix. Interestingly enough, "Last Boss" finishes off this soundtrack for me with one of my favorite boss themes in the series; it has high energy, sounds a bit jazzy in composition, and boasts a very powerful, and sometimes evil, sound. Sadly, that's all this entire album has to offer in my opinion. The other stage themes are extremely weak in their melodic portions, but are fitting for their respective stages.

Thankfully, the last album is an improvement from Rockman 4 and Rockman 5, but still isn't up to the caliber of the first three games. Stage themes like "Flameman Stage," which reminds me a lot of a Gust soundtrack, "Windman Stage," which is really whimsical in approach, "Tomahawkman Stage," which features a semi-tribal sound to it (that's the easiest way to describe it with chiptunes), and "Yamatoman Stage," with its Japanese influence, are easily the best stage themes on the album. The others are decent, and offer a nice interesting atmosphere, but in the end, fail to capture the heart of this listener. Fortunately, the "Boss" music for this game more than makes of for the recent shortcomings found in the previous games; it offers a really catchy riff in the accompaniment and a jazz-like melody creating quite a fun battle theme. "Dr. Wily Stage" is nice, but it doesn't compare to some of the recent games. Overall, this album is quite fun, and an improvement over the previous two, but it does leave something to be desired. While I won't review the track by itself, the ending theme to this game is probably the most special since it features stage themes from previous games, such as "Flameman Stage."

The Capcom Music Generation: Rockman 1 ~ 6 Soundtracks is a collection for the old-schoolers of gaming. It features a comprehensive Nintendo Entertainment System library of Rockman music, compensating for the pre-2002 starvation of album releases for the series. Should you purchase this album? Well, that depends. If you tend to enjoy most Rockman music, this album is definitely for you. At the same time, if you only enjoy certain games, you are probably better off finding the music to the games you enjoy the music for, since some of the games are much weaker than others. In the end, it's all up to taste, but the first three Rockman games offer the strongest experiences on this compilation, while the fourth and fifth Rockman leave much to be desired. Overall, it's a great collection of music and a cornerstone of gaming.