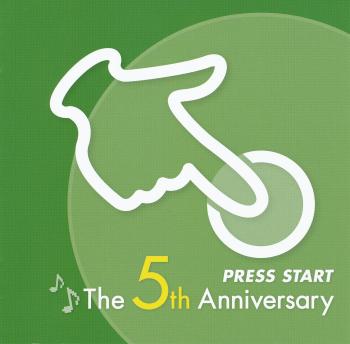 September 2010 was truly a major month for classical interpretation of video game music. We had a ground-breaking concert recording with Symphonic Fantasies, super talent Benyamin Nuss making his debut album a tribute to Nobou Uematsu, and Dog Ear Records bringing a team of pianists together for light hearted fun. In the midst of all these releases in September, Enterbrain also released an orchestral album featuring nine recordings from the long-running concert series Press Start in Tokyo. With its mixture of mainstream favourites and more abstract choices, Press Start has always had a quite diverse of titles it features and has even surprised some in Japan, taking the audience on many new exciting discoveries. This album bases itself completely upon the less well-known selections, maybe to make licensing issues more relaxed. Four of the selections are from Press Start 2008: Symphony of Games at the Bunkamura Orchard Hall (Ys, Samurai Spirits, Spelunker, Professor Layton), whereas the other five are from Press Start 2009: Symphony of Games at the Tokyo Metropolitan Art Space (Persona, Chunsoft Adventures, Suikoden, Okami, Fantasy Zone). It's fantastic to see some music from the concert series being released on an official album.

The first suite is from the Shin Megami Tensei series, which is relatively popular in both Japan and the West. This particular adaptation is focused on Shoji Meguro's Persona 4, featuring fan favourites "Aria of the Soul", "Reach Out To The Truth" and "Corner of Memories". It opens up a few tones from each piece, foreshadowing what we will hear in the suite, before going into "Aria..." with Takahashi Oriko doing the soprano work. The woman on this CD has a much stronger voice than the theme's original singer while the orchestra elegantly dances around her voice with music. It might just be the live setting that creates a better sound for this operatic style of voice. The suite eventually explodes into "Reach Out To The Truth" — a strange hybrid of RPG battle music and J-rock in the original game. The arranger takes the original in the account while blending rock with classical touch; in particular, all the percussion is done on a rock drum set. This is the only time this music will ever sound like an actual battle theme. Pia-Com's Keita Egusa appears on this suite soloing on the ending theme, "Corner of Memories", as the orchestra slowly appears in the background. A strong opener and delight for fans of the series.

Moving on to some personal delights, the first up is Yuzo Koshiro's Ys I & II. These games have always lent themselves well to orchestral renditions and the three popular selections featured here are no different. From the light touches of bells and strings in "Feena", to the adventurous progression and majestic horns of "First Step Towards Wars", and the orchestral highs of the eventual climax in "To Make the End of the Battle", the Kanagawa Philharmonic Orchestra manage to faithfully represent the now legendary music for the series. Yet against other interpretations such as Symphony Ys or Falcom Neo Classic, the presentation may be too straight-laced to appeal to the most dedicated J.D.K. collectors. Another series no stranger to arrangements, Suikoden from Konami is represented with its main theme "Into a World of Illusions". Again very adventurous in style, it features rich harmonies and clear melodic narrative, with a great piano solo from the returnee Keita Egusa. It paces itself appropriately and hits all the moments on queue to become a good, solid representation of its source material.

Moving onwards, Samurai Spirits (which global gamers know better as Samurai Showdown) is an Edo era 2D fighter that featured stylish music based on authentic instruments and tonalities from the time period. This track offers something that is quite unique to this album, as a fully envisioned traditional arrangement by Nobuyuki Nakamura. It uses the shamisen and shakuhachi flute almost exclusively, while the orchestra are only used to bridge the sections together melodically. The shamisen performance by Takemi Hirohara is quite impressive and the track becomes more of a live instrument performance than a full on orchestra arrangement. Okami offers similar qualities, combining traditional Japanese instruments that recapture the setting of the game, with orchestral passages that provide more Westernied melodic progressions. Even so, the arrangement is strikingly rich and atmospheric, capturing the melancholic and healing qualities of the game beautifully. The three included tracks, "Beginning", "Ryoshima Coast", and "Reset ~Thank You Version~", will be instantly recognisable and are treated with in a way best mastered by native Japanese artists. The moments featuring Egusa's piano joining the shamisen and shakuhachi are near magical in execution.

Kamaitachi no Yoru and Otogirisou are also quite unique to this release. These Chunsoft titles were instrumental in creating the genre of games known as sound novels — a genre that is not in itself very popular in the West but has still enjoyed a limited popularity with titles such as Higurashi. Relying more on sound and music to illustrate the situations and emotions, rather than visuals, the music from these games were for the most part exceptional. While not connected beyond developer, the two games were spliced together into a medley here, being stark contrasts of each other. The Kamaitachi no Yoru selection features Kojiro Nakashima's "Requiem" and Kota Kato's "Nightmares", which combine elements of sorrow and mystery with its evolving medley; while the start is very calm and natural, the music moves into darker territories with a heavy bass string section and marching percussion, echoing the game itself. The transition into Chiyoko Mitsumata's Otogirisou is a bit uneven — with the previous theme ending completely before "On the way to the Mansion" and, later, "Nami's Memories" are introduced. These tracks are much slower and exploratory, with some beautiful flute sections backed by a clear harp. It's the longest track at 8 minutes, and probably the best pure musically with incredibly rich melodies and emotional content, despite its abrupt transitions.

Moving on to another curious selection, Spelunker is mostly little-known in the West and those that do know it have generally played its C64 rather than NES version. However, the game is a classic in the Japan associated with the Famicom and, even with its kusoge status, it remains dearly loved to this day. That said, it's clear that Nobuyuki Nakamura found it quite a stretch to arrange the very little music found in the game into even the three minute suite featured here; while it sounds very good for what little there is, it fails to impress after such strong presence as the Chunsoft titles right before it. The crew must have been aware of this, as there is some sort of interactive activity going on during the performance on stage — only represented with frequent laughter from the audience on the CD, which is rather detractive on the album release. It doesn't make for a very interesting listen and, despite a noble idea, becomes instantly forgettable.

Professor Layton and the Curious Village thankfully provides one of the absolute highlights of the album. "Puzzle" is quietly performed with a xylophone and drawn out string strikes, resulting in a very youthful and curious take on the original, and the track subsequently jumps into the now famed "Layton's Theme"; this portion builds up the tempo considerable, develops a strong character, and is particularly dominated by jazzy brass. While the arrangement is more or less a slight expansion of the one found in the game itself, the added strength of the live sound and proper echoing of the instruments make for an amazing rendition of an already fine adaptation. Finally, Fantasy Zone from the 2009 concert is the last track on the album and is quite a contrast to the other tracks featured. SEGA's light-hearted shooter uses a large mix of illogical creatures and environments, something this arrangement also does to its favor. Ranging from big band sections to epic cinematic orchestrations, the Tokyo City Philharmonic Orchestra whisks us through a medley of the greatest selection for the score by Hiro Kawaguchi. The whole track is fun and catchy, but unlike Spelunker, manages to also be musically relevant at the same time.

The natural comparison to be drawn for this album is the Symphonic Fantasies CD, which was released mere weeks from the Press Start: The 5th Anniversary CD. As the king of orchestral video game music recording, the mastering and mixing of Fantasies is vastly superior, while Press Start suffers from the more usual issues with background noise and audience mumble being audible quite often. The items are also much more restricted in their arrangements, owing more to the Orchestral Game Concert series during the 90's; in this sense, they are generally tied to the boundaries of the source material and don't generally explore its possibilities beyond whatever technical limitations it originally suffered from. What makes the Press Start album so good is the track listing, which features music that you'll never find arranged anywhere else, and most of the interpretations are great successes. Even if you only know a limited number of the games featured, it's worth tracking down to discover some soundtracks you'd never heard of, but realize you should have known already.