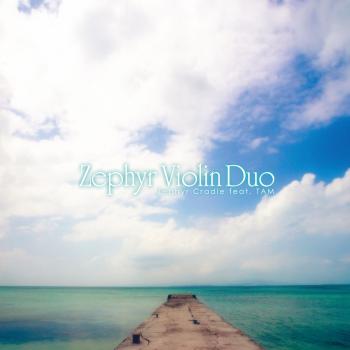 Comiket always offers a rich selection of new music releases with ever exciting premises. It can be the never ending stream of Touhou works that makes your homemade Marisa dress swaying, the doujintrance scene making you trip, or the game arrangement albums that peaks your interest. Simply put, put Comiket truly offers something for everyone. One of the more interesting releases comes from Zephyr Cradle and features a team up between Zephyr director Daijin and TAM, the prolific classical musician that has produced and participated in over 70 releases since 2005. Let's see if the styles blend together between the two circles on Zephyr Violin Duo.

This CD is actually the second in a Zephyr Violin series, with the first being released at M3 last may. The basic idea with the Zephyr Violin series is to take previous arrangements from Daijin's portfolio and have TAM record violin leads to expand the arrangements further. With the EP style approach, there are five tracks to be found on this CD and the track selection offers both well known and obscure material. Whereas Daijin mostly focuses on music from Square and Enix games, TAM's massive catalog is almost exclusively focused on material from Touhou and KEY, so to keep things even between their interests we get a mix of Square and KEY on these albums.

The first two tracks are clearly works that TAM picked out, "Gentle Jena" from planetarian and "My Soul, Your Beats!" from Angel Beats!, both titles put out by KEY. There's something quite astonishing about these two tracks, because they do so much good in many ways. First would be the fact that these pieces will probably serve as an introduction to the music from these games that western fans will probably not be very familiar with. TAM and Daijin don't stray too far away from the source, but they in all sense of the word improve it. "Gentle Jena" is originally played completely with digital piano and synth ambience. The digital piano is kept here but only in the backing melody while TAM adds a new amazingly emotional layer to the song with his violin. The backing track is also fleshed out a bit with percussion elements from congas and tambourine. TAM actually featured an early version of this arrangement on his fifth TAMUSIC KONSERTO album, but as his skillset and production have now vastly improved, it's not close to rivaling this version. While short, the performance here gives a chilling sense of emptiness.

"My Soul, Your Beats!" is the theme song for Angel Beats! Which is actually a anime and media franchise from KEY and is the only non game track featured on the CD. The original song features vocals by Lia, who previously was well known for her work on Air and Tomoyo After. Daijin uses the digital piano and bell percussion in this to create a very driving and fast flowing beat while little by little integrating a sampled acoustic guitar section to back up the violin lead. TAM's violin playing has by far a much wider emotional range than then original singer's voice and, as a result, the arrangements leaves a strong impression if you are familiar with the original. The harmonization of the violins at the end is absolutely perfect. With this track, though, you will start to notice a recurring flaw with this album. The digital instruments and samples are of a rather low quality and lack a certain echo. Parts of this track ha vethe digital piano playing the same note repeatedly, which sounds very awkward because it is the exact same tone played at the exact same length and volume, which on a real piano would have very small but noticeable differences. A much slower version of this song appears on TAM's 66th doujin album, the Angel Beats Violin X Piano CD. In the case of both of these KEY arrangements, they not only serve as the perfect introduction to some amazing original compositions, but in my humble they also improve them and showcase how rich the source truly is.

Final Fantasy V's "A New World" changes things up a bit from the previous tracks with its much more adventurous mood. This arrangement was featured on Zephyr Cradle's Bifrost album in a much more tame package. Here we now can hear added sitar, kettle drum percussion, flutes, and, of course, TAM's violin. With this track, you will also notice there's a significant gap between the quality of the samples and the real tone of the violin, as it uses a synth string section in the melody that comes off sounding horrifically weak in comparison. There is a point in this piece where the acoustic guitar and violin are harmonized which is quite good, but overall it's one of the weaker offerings on this CD due to the samples not being of very high quality for a number of the instruments — always a concern when going against a real string instrument which has a very striking and direct sound. More KEY music appears through another of TAM's older works, this time "The Day She Waited For The Wind". This arrangemnet is quite similar to the original with simple percussion and drums added. Similar to "Gentle Jena", it is quite an emotional piece with a lonely melody going for it. However, due to it being quite short and somewhat straightforward, it doesn't leave the same punch. Beautifully performed but lacks a real purpose.

The next two arrangements are probably the eyebrow raisers and why most fans would be interested in picking this album up. Chrono Trigger's "Corridor of Time" and Secret of Mana's "Angel's Fear" appear back to back for some old school Squaresoft action. "Corridor of Time" follows the mold of other arrangements of this song with beat drums and soft synths. In ways this song is very similar to MintJam's arrangement on 3rd GIG with the same Indian instrument influence and structure. It offers very little new, but this track is somewhat sacred and it seems everyone does their take of it. Thanks to TAM's excellent playing, it works barely, as it could have quickly have been left forgotten in the sea of "Corridor of Time" arrangements.

One game that does not have too many arrangements floating around, however, is Secret of Mana. This track is probably the most interesting of them all. The arrangement will sound quite familiar to seasoned doujin fans as it was released once before. In 2007, Zephyr Cradle teamed up with circle Scinicade to release their Sanctuary of Mana CD. This track first appeared on that album with vocals done by saori, who has performed on a number of TAM's older works. The arrangement used on that CD is now featured here without the vocals and violins instead them. Saori has never been a very good singer in my opinion, so this track comes as a god send as the actual arrangement is quite excellent. It features a wide array of percussion mixed in different ways, a driving bass line that keeps the track moving at a great pace, and the violin being performed at probably the most inspired level across this CD. It perfectly fuses the new original lead parts with the familiar backing melody and the plethora of elements used creates a wide soundscape. One major bummer, though, is the horrible drum samples used which are so flat and dead. I can't recall them sounding so bad on the SANCTUARY album so it must have been a production oversight when producing this CD. But with the choice of flat drums or flat singing, I think the choice lands on flat drums.

The album closes out with another Kanon track called "The Place Where The Wind Arrives". Like most Kanon music, it offers a soothing and thought provoking melody, which is enhanced greatly with this arrangement. It offers a nice change of pace with a piano solo instead of the violin, and the interaction between the two instruments is pulled off near flawlessly. In contrast to the majority of the arrangements featured on this CD, this track has more of an embracing mood with a soft playing of the piano, guitars, and percussion, as well the softer tone to the violin. A great choice for a closing piece.

Despite some rough corners with the low quality of samples, this CD is truly beautiful and offers a creativity and production rarely seen in the Western remix community. There's no denying the exceptional skills of TAM and what he brings to the table, while Daijin's arrangements back him up quite well. With a good selection of well known fan favorites and also lesser known titles, it will also serve as the perfect entry point into the musical works of KEY. If you can track the CD down on YJA or any other outlet it's well worth the purchase, even just for the Secret of Mana track alone.