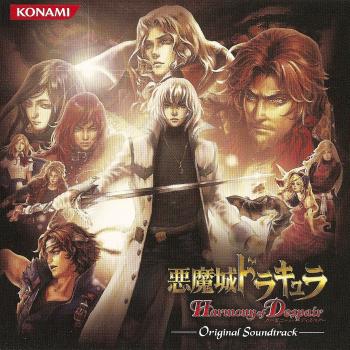 The soundtrack to the Xbox Live title Castlevania: Harmony of Despair was recently given a stand-alone release. It primarily features arrangements from the series' vast history, with a few originals here and there, to serve as a tribute of sorts. However, how does the overall soundtrack turn out given the plethora of in-house Konami arrangers?

The originals, composed and arranged by Yasuhiro Ichihashi and Tomoaki Hirono, are of mixed success. Themes like "Drone" and "Hymnus" mean well with their haunting atmosphers, but in the end, they meander about without any real development. "Corpse's Gate," one of the rock originals, means well, but due to its short length, doesn't really develop too much, despite its gothic rock tone and high energy. However, there is some success when it comes to the originals. "Purple Eyes" is a haunting piece that has an evil, carnivalesque sound coupled with a very emotional violin line. It's definitely one of the better original pieces, particularly with the waltzy piano line included. Another orchestral theme that manages to be more successful than detrimental is "Ein Weltherrscher," with its heavy emphasis on militaristic percussion and choir tones. It has a very ominous sound, but lacks a bit of development in terms of track progression.

There are also some successful rock originals as well. "Phantom of Fear" is a chaotic rock track featuring choral work, sinister strings accompaniment, and a very Castlevania melody. It definitely captures the Castlevania atmosphere quite well and definitely has some J-rock influences. It works wonderfully in the special in-game context. Another successful original is "Tanz mit einem Clown." Piano, electric guitar, and violin really come together to form a very classical, yet modern, sounding theme with a great energy. The sinister choral accents are a nice touch as well. "Crimson Blood," while not as elaborate some of the other rock originals, still manages to succeed with a stunning melody line that really captures the gothic nature of the series. The last original, "Tractus," is a haunting, sorrowful, orchestral theme with some powerful choral work and orchestration at times. I do like the varied soundscapes as it progresses, with some sounding more gothic, especially towards the end.

When it comes to actual remixes, there is a lot of source material to be touched upon, particularly in terms of the handheld games, and of course, there is also some mixed success. "Ruined Castle Corridor," from Aria of Sorrow, definitely manages to capture the classic Castlevania sound with its energetic orchestral rock accompaniment. Yasuhisa Ito did a great job in his sole contribution. Meanwhile the take on "Heart of Fire," also from that title, is much more intriguing, with its orchestral rock tones, big brass sounds, and powerful guitar riffs.

On the Dawn of Sorrow front, "Into the Dark Night" is a rock remix with powerful choral accents and some orchestral accompaniment, but leaves a bit to be desired. The same could be said for "Pitch-Black Intrusion" which adds some mysterious tones to the overall mix. "After Confession" is one of the longer remixes on the album. It's, as expected, a rock remix, but given the length, it really has a chance to develop. Opening with choral tones, harpsichord, and violin, it moves into a guitar riff heavy remix with some slick keyboard work in the accompaniment and a great violin lead. In a way, it reminds me of a Falcom take on the Castlevania series. "Piercing Battle Fury" is a sinister orchestral arrangement with a slight electronic accompaniment to give it a bit of tempo. It manages to capture the haunting atmosphere of the original and it's nice to hear something other than a rock remix.

Another handheld game, Portrait of Ruin, is also prominently featured. "Gaze Up at the Darkness" is the sole remix contributed by the legendary Sota Fujimori. It has a very gothic tone mixed with some haunting choral work in the harmony. I also enjoy the electronic accompaniment as it provides an intriguing mix between more modern touches and more classic touches. Another successful remix is "Hail from the Past," which is very tribal sounding with a Middle Eastern flair. This is definitely a fun remix and I really like the combination of the haunting synth and Middle Eastern instruments. Definitely not expected, but welcome as it helps give a bit of diversity to the album. "Piercing Silence" also manages to see some success, albeit it's less melodically focused than other remixes. I love the focus on the sinister organ work combined with orchestra and rock drums. It has a very ominous sound and although the melody is a bit lacking at times, it manages to serve as a nice addition to the album.

On the other end of the spectrum, "Esquisse of Violence, a powerful orchestral and choir remix, features some sinister tones, but leaves a bit to be desired in terms of development. Likewise, "The Hidden Curse," features some slight electronic accompaniment, but I don't find this one to be too enticing, perhaps because I'm not the biggest fan of the original soundtrack aside from a few themes, but I do appreciate the various melody lines that are featured, such as the woodwinds and strings. Compared to the original "Invitation of a Crazed Moon" by Yuzo Koshiro, I don't enjoy this one too much. The retro vibe still manages to stay alive, mainly due to the keyboard work, but I think by making it somewhat rock focused, a bit of the charm of the original is lost, particularly when it comes to the jazzy piano of the original which really gets lost in the power of the rock riffs. There are definitely those who will enjoy it though.

The remixes for Rondo of Blood are pretty successful for the most part. "Divine Bloodlines" is a rock remix with some Asian vibes. It definitely reminds me of something you might here from Falcom with its speed riffs, orchestral and rock melodies. It features some retro synth as well. Overall, it's a very well done and very powerful take on the original. Likewise, "Slash" is a great orchestral rock version of the original. The electric guitar really helps bring power to the melody and the orchestral accompaniment helps give it a more classical feel. Unfortunately, "Dance of Illusions" attempts to sound very powerful, but I think the heavy percussion makes the remix sound muddled at times, as if the drums are competing with the other instruments. When it's not present, the choral tones and organ definitely manage to give it a more powerful aura.

Several classic titles are also given a small presence. The title's version of "Vampire Killer" is a guitar riff intensive version of the original with some gothic keyboard work. It's definitely better than the vast amount of dance inspired remixes out there and I love the elaborations on the melody with some of the guitar passages. Unfortunately, "Nothing to Lose" is an orchestral rock remix that is powerful, but ultimately unexciting. "Aquarius," from Castlevania III/Circle of the Moon, is much improved version of the original. Powerful electric guitar passages and some upbeat piano/keyboard work really make this one work. "Simon's Theme," from Super Castlevania IV, is a sinister orchestral rock take on the original. It definitely updates the original sound, but doesn't really add too much, aside from some keyboard elaborations in the background. The mix between rock and orchestral melodies is nice though.

The two representatives from Getsu Fuma Den both have a very Asian rock inspired sound. "Go! Getsu Fuhma" is an orchestral rock remix with a pretty strong electric guitar melody. There is definitely an Asian tone about it, due to the classic Japanese instrumentation used in the accompaniment. It's a clever remix, despite being short. "Ryu Kokki" follows a similar approach, but is more intense. I definitely love the powerful Asian strings, although I'm having trouble distinguishing wheter it is a shamisen or a koto.

The most recent handheld game, Order of Eclessia, is well-represented. "Ebony Wings" is another lengthy rock remix that reminds me a bit of Rob Zombie's rock music. It's a very powerful remix, but at the same time, it definitely drones a bit before getting to the solo. It's a great solo, but also a bit short; however, it's not a lot of payoff for such a long wait. "An Empty Tone" is an orchestral rock remix that's pretty straightforward with some slight speed metal inspired guitar riffs. Overall, though, it's pretty unimpressive. The same could be said for the sinister and powerful orchestral take on "Symphony of Battle." Fortunately, "The Colossus," a rock remix with powerful guitar riffs, haunting synthesizer work, and a strong lead electric guitar, and "Order of the Demon," a powerful and sinister orchestral remix with powerful brass tones and a chaotic nature, definitely stand out.

The last game featured on the album is the fan favorite Symphony of the Night. As with the other games, it features varied success. "The Lost Portrait" is a pretty straightforward remix of the original that keeps the haunting atmosphere and adds some small accompaniment elaborations. "Castle Dracula" features an interesting take on the original with its focus on orchestral melody and rock accompaniment. I don't find it to be as good as the original, but it definitely does justice to Yamane's work, especially when the orchestral instruments and electric guitar play the melody together. "The Horde's Festival" is a battle theme from the original game that's given the hard rock treatment. This is another remix with a lot of intensity. While it's fairly straightforward, I do enjoy the small elaborations in some of the electric guitar work and of course, the sinister keyboard work is also welcome. Finally, "Poetic Death" and "Pitiful Scion" are both orchestral rock remixes that really manage to capture the wonders of the original, whether it is the chaotic feel of the former or the power of the latter. The slower tempo sections in the former help accentuate the sinister soundscape while the haunting piano accompaniment of the latter serves as a welcome treat amidst the intense rock.

In the end, the Castlevania: Harmony of Despair album is a mixed bag. Those liking powerful rock remixes will be sure to enjoy a lot of the album, but I find some of the orchestral themes to be a bit underwhelming. The original music is also of mixed success featuring some powerful rock themes, but some ultimately unsatisfying orchestral pieces as well. In the end, if you've played the game and really enjoy the music, or are a hardcore fan of the Castlevania series, you might end up liking this album, but as a stand-alone listen, it's a bit lacking.


Contains rearrangements of music from throughout the Akumajo Dracula franchise.

Tracks 17-19 are (currently) unused music that can be used as extra BGM.