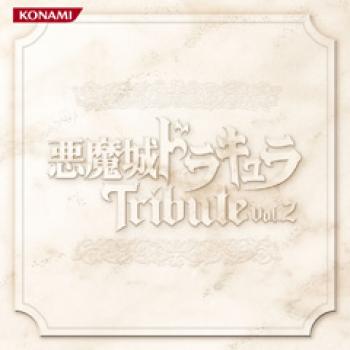 The Castlevania series is a very popular series featuring a variety of classic themes throughout the various generations and incarnations of games. A set of tribute albums related to this music featuring many famous names in the gaming industry was released in 2011. The second volume focuses on conveying "the setting of a fantasy" and features mostly instrumental and world arrangements of Michiru Yamane's Castlevania music. Featuring many of the more iconic themes, how does it manage to turn out?

The album opens with "The Sinking Old Castle," arranged by Azusa Chiba in an organic manner. This arrangement has a very worldly sound, with hints of Asia, France, and Ireland interspersed throughout. The majority of the remix definitely features a more Celtic approach, as bagpipes and Celtic flute dominate the soundscape. however, the strings definitely have a Japanese tone to them and the placement of accordion conjures up images of Paris. There are also some sections that incorporate some wispy vocals, presumably from Chiba herself, and some rustic guitar. In a way, it's a bit Renaissance sounding in approach. It's a diverse take on the original, but I think it stays together quite well.

"The Lost Portrait," by AKANE, features haunting vocals, a slight industrial accompaniment and some beautiful harp and music box harmonies. There is a bit of a Celtic influence with the incorporation of Celtic flute. While the vocals are the sole focus, the haunting atmosphere is accentuated and when more prominent orchestration is introduced, the soundscape becomes quite lush. The inclusion of a synthesizer solo section is an intriguing addition and it really manages to accentuate the atmosphere and has a bit of a jazzy sound to it.

One of my favorite remixes on this album is "Requiem for the Nameless Victim" by Soyo Oka. It opens up with haunting choral tones and organ with an upbeat accompaniment that foreshadows the future development of this album. After the opening section, it moves into an exquisite acoustic guitar section with some wonderful and romantic strings harmonies that really gives a rustic, country feel with a feeling of sophistication as well. Eventually, the remix adopts a very spaghetti western type sound that definitely brings to mind Ennio Morricone. Of course, through all this, there are some still haunting tones featured, particularly when the introduction is re-introduced into the actual remix and climaxes with some electric guitar tones.

"Union," by Masato Kouda, is one of two solo piano arrangements. It doesn't do anything super elaborate, but it manages to create an extremely sorrowful, yet romantic, atmosphere, through its haunting tones and tempo. I think that Kouda managed to really bring the core melody to life with this remix, even if it doesn't use a lot of instruments. Perhaps his offerings on Pia-Com II are more impressive and better-placed, though.

The other solo piano arrangement is by Kumi Tanioka, "Concert Hall without Applause". To me, it manages to capture the haunting atmosphere of the Castlevania series' music, despite how romantic and classical the actual piano sounds. I know it may sound crazy, but there is definitely a feeling of abandonment in this arrangement, at least in my ears. It definitely fits the name of the track title, in my opinion.

"Ending Theme," by Hiroki Kikuta, starts off with ominous strings and piano before moving into a very heroic, orchestral theme that starts off with some magical piano sounds and pizzicato strings. There is definitely an air of drama in the track as it manages to incorporate some more gothic tones in the accompaniment. For the most part, it's a very playful, yet heroic theme that manages to capture a victorious tone. In the end though, I think it could have developed more as the arrangement itself does loop.

Another one of my favorite remixes on the album is Maki Kirioka's "Girabaldi Courtyard." This is definitely the most experimental remix on the entire album and caters towards Kirioka's darker tones. It opens up with some bizarre vocal work before incorporating some haunting cello, acoustic piano, and electric sitar work. As the tempo quickens, the vocals become a bit more normal and focuses on the melody of the original. There are some sharp contrasts to the beautiful vocal work though, such as the chaotic, industrial soundscapes that interrupt from time to time or the electric guitar lines. It's definitely an arrangement that may cause a differing of opinions, but I think Kirioka created a very captivating, bizarre, and mystical rendition of the original.

Manami Kiyota's rendition of "Requiem of the Gods" is, for the most part, pretty straightforward, but through her arrangement, I find the original's melody to be fortified with updated instrumentation and sound. It remains as haunting as ever, with the opening notes sending a chilling message to the listener. The biggest improvement, in my eyes, is the choral work. The vocal harmonies are exquisite and really help give off that religious atmosphere heard in the original, especially when it comes to the pipe organ interlude. I also particularly enjoy the harpsichord and vocal section that really heightens the overall suspense of the arrangement.

The most upbeat arrangement on this album comes from Hideki Sakamoto. His take on "An Empty Tome" capitalizes on his skill with stringed instruments and piano. The violin melodies and harmonies are absolutely wonderful and go well with the pop-like drum pad. There are moments that definitely have a bit more romantic emotion to them, particularly in the B section when the violin melody is more drawn out and the piano accompaniment is included. The solo section is a marvelous jazz piano improvisation with some violin accompaniment. It's definitely the most fun section of the remix. All in all, I think Sakamoto took the original and transformed it into a moving violin and piano piece.

Eriko Imura remixes "After the Battle ~Blue Recollection~." This remix has a very light-hearted soundscape, which I'm assuming mirrors some of her music in the Klonoa series. Ethereal, yet bright, synth and a lively electronic accompaniment with a tropical vibe dominate the majority of this remix; however, there are times when more serious tones are introduced, particularly when the pipe organ section in the beginning is introduced. For the most part though, it's an extremely vibrant piece of work.

Yoshino Aoki's "Requiem of a Starlit Night" has a very somber, but romantic, atmosphere. Haunting operatic vocals, mysterious and poignant strings, magical music box, and some beautiful orchestration really make this remix sound out and it's definitely one of the more lush remixes towards the latter half of the tribute album. I really think Aoki managed to create a stunning arrangement that manages to capture the more gothic tones of the Castlevania series, mainly due to the powerful choral work, but also manages to keep a haunting romantic sound as well.

Another orchestral arranger comes in the form of Masashi Hamauzu and his take on "Finale ~Deep Translucent Moonlit Night~." Fans of Hamauzu are sure to enjoy this one. It is deeply emotional and his play between strings and piano bring a very delicate air to the arrangement. To compare it to some of his other works, it's more reminiscent of his more emotional themes from Dirge of Cerberus. The somber atmosphere brings to mind more despairing moments in the Castlevania series, but at the same time, there is definitely a hint of hope heard in the music, at least in my opinion. It's very interesting to see Hamauzu work on arrangements for other series now that he's a freelance composer, so it'll be interesting to see how his style evolves over the years.

The last theme, "Nocturne," is by a duo known as kukui and closes the album on a particularly romantic note. Haruka Shimotsuki's vocals manage to bring a very delicate air to myu's arrangement and really help accentuate the melody. As for the remix, at times, it's more delicate and simple, but as it progresses, it definitely becomes more magical and lush, with its introduction of a drum sample, more prominent violin, harp, and piano accompaniment, and some beautifully intoxicating vocal accompaniment that help bring etherealness to the remix. It's a stunning way to end the album and I'd love to hear kukui work on future arrange albums in the future.

While I enjoy both volumes equally, I think that most people will really enjoy Akumajo Dracula Tribute Vol. 2 far more than the first volume. It is far more cohesive in terms of musical style and each composer manages to transform the originals into something magical, given their unique touches. At times, magical, at times a bit frightening, it manages to provide a more fantastical approach to some of the lesser known themes in the series, but at the same time, keep the melody as the focus. For fans of orchestral instruments, which the majority of this album utilizes, this album is definitely the one to get, if you had to choose.