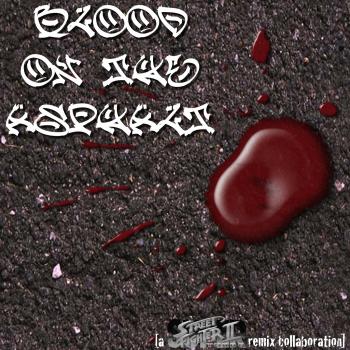 Since the game's release in 1991, Street Fighter II has gained a ridiculously large official discography of around 20 original and arranged albums. To this day, there remains a tremendous amount of enthusiasm related to remixes of its music, although there are surprisingly few fan-arranged albums for the game out there. Having previously tackled albums dedicated to classics like Super Metroid, Donkey Kong, and Chrono Trigger, OverClocked Remix unsurprisingly decided to change this in 2006. Led by Malcos, a large team of remixers treated all the character themes and several other pieces from Super Street Fighter II Turbo on a range of styles. They were so successful that they were later selected by Capcom to handle the official soundtrack to Super Street Fighter II Turbo HD Remix released in 2008. Yet while Street Fighter II: Blood on the Asphalt seems diverse and appealing on the outside, it's quite clear after spending more time with it that it is quite flawed...

OverClocked Remix offer very familiar styles and soundscapes on much of the album. There are fan services inspired by past Street Fighter II arrangements such as Ken's power rock or Sagat's jazz fusion mixes. There are also effective culturally inspired tracks such as T. Hawk's guitar-based Wild West anthem and Dhalsim's Indian fusions. Showing sexism is not dead, the two female characters of the game are both represented with relaxing piano-infused jazz grooves; while both remixes are competent, they lack individuality and sound derivative. Album director Malcos' superficially atmospheric sound is also too dominant on the album; the nostalgic soundscaping of Balrog and emotional intensity of M. Bison is effective, but the remixes seem somewhat predictable given their adherence to a distinctive and stereotypical remixing approach. Ryu's theme is another track where the stereotypical sounds of OverClocked Remix — complete with ecstatic electric guitars, hyperactive beats, and even melodramatic orch hits — are given full focus. This style is enjoyable, but OverClocked Remixers tend to be more impressive when they distance themselves from it.

There are nevertheless some very daring remixes on the album. Zangief's once goofy theme is transformed into trippy rave music for a dance club; the combination of Russian-influenced hard techno beats and racing high-pitched interpretations of the melody is simply bizarre here. Another eyebrow lifter is the recorder-led version of Guile's theme. Was Trenthian trying to portray the fighter at kindergarten? These remixes are certainly interesting even if not all will like them. José the Bronx Rican's two remixes — both of which integrate rapping — are the most creative on the album. The reggaeton take of Dee Jay's theme is an ingenious way to reflect Dee Jay's attitude and Jamaican roots. So much rhythmical drive is created by the combination of piano riffs and continuous rapping. The lyrics are also superbly done and interpreted with a convincing Caribbean accent to boot. Even better is his interpretation of Vega's theme with slow moody strings. The lyrics are pure bravado and include legendary lines such as "I'm the most beautifullest thing in this world and the reason this world exists". Admittedly not all will appreciate these tracks, especially those prejudiced against rap, but Vega deserves to take the title.

Another controversial point is the structure of the album. It gets off to a sluggish start by opening with remixes of two memorable but subsidiary themes from the game. The title theme offers so much bass but too little melody while the character select remix recreates the tension before a fight a little too uncomfortably. Even when the album gets to the character themes, fans are given a remix of Blanka's theme as a result of some strange track ordering. Fantastic for those who want to hear some atmospheric electronic soundscaping, but not those desperate to hear Ryu's theme at full volume. Fortunately, the latter half of the album is structured better — introduced by remixes of both Ken and Ryu before intensifying with the themes for the four Devas and Akuma. The conclusion of the album is nonetheless long-winded once again; the light rock vocal arrangements of Guile's ending theme could have provided a creative end to the album, but they're sadly bundled with a novelty remix of Dhalsim's ending theme and redundant retro remixes of the ranking and staff roll themes. It's regrettable this album wasn't released as a CD since the superfluous material would have needed to have been cut for an appropriate playtime.

Street Fighter II: Blood on the Asphalt isn't a bad album, but feels more like an extended compilation of remixes than a coherent overall effort. There is quite a lot of experimentation of varying success here, but much of the album exhibits the stereotypical sound one might expect from OverClocked Remix. Though most remixes are acceptable, the album would have been more balanced were some of the unnecessary opening and ending themes rejected. Nonetheless, those who enjoyed the Super Street Fighter II Turbo HD Remix Official Soundtrack ought to check this one out. Both to see where the phenomenon started and get a chance to hear full-length remixes by talents such as José the Bronx Rican, Malcos, and Vurez. Given the album is free, you don't have to worry so much about being potentially disappointed.

Blood on the Asphalt is an OverClocked ReMix tribute album to the music of Super Street Fighter 2 Turbo, its contents comprised of new arrangements of old, familiar songs from the original game soundtrack, created by various artists, unified along the lines of genre and tone. The arrangements contained herein have been designed to be evocative of dark, pseudo-romanticized urban imagery: abandoned playgrounds and crowded street markets; back-alley block parties and hole-in-the-wall bar dives, scenes that are, I hope, befitting of a tribute to one of the most iconic games in arcade history. So sit back and download. I hope you dig it, and if you do, drop us a line. We'd be happy to hear from you.
-Shael